The Border’s Already A Mess, Even Without Trump’s Wall

The Real News speaks to a co-chair of the Sierra Club's borderlands campaign down in McAllen, Texas about the current state of the wall, Trump's vision and how feasible it is

The Real News speaks to a co-chair of the Sierra Club's borderlands campaign down in McAllen, Texas about the current state of the wall, Trump's vision and how feasible it is 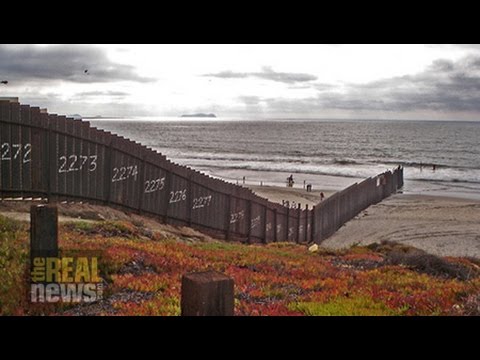 SCOTT NICOL: So, that pile of ladders is like I say, about 10 miles south of my house. There’s probably some guy in a little shop that just bangs out these ladders out of scrap wood. You know, people would you know, float them across the river on a little raft. They will run through the woods for a half a mile or so before they get to the wall. Prop it up on the wall, climb over, and keep on running. The border patrol finds these ladders; they don’t want to keep them propped up against the board wall. So they drag them behind their jeep, pile them up and it takes maybe a week or 2 to get a stack of about 5, 10, or 15 ladders. Then they cart them off to the dump and then a new pile accumulates. You know, the wall has been defeated and that section of wall cost about 12 million a mile. That’s been defeated by a ladder that probably costs 2 or 3 dollars for wood and nails.

THOMAS HEDGES: With Donald Trump’s bid to become president of the United States, the Mexico-U.S. border wall has reentered American discourse with full force. But each time it’s purpose is discussed on the national stage every election cycle, it is rarely coupled with a comprehensive plan to address the issue of immigration.

HEDGES: When the Real News set out to explore the details of Trump’s wall weeks ago, we were stonewalled by Trump’s spokespeople and senior advisers’ countless times. So instead we spoke to the co-chair of the Sierra Club’s borderlands campaign who lives just a few miles away from the border in Texas. He told the Real News that Trump’s wall proposal does nothing to address complications that have already set the wall’s deadline back a ways.

NICOL: My guess that somebody showed him a picture of the Israeli-Palestinian wall and he gave it a thumbs up and that was as much thought as went into it. The tallest walls that exist right now are 18 feet. So, is he going to start over from scratch? Is he going to tear all those walls down and put new walls in their place? We’ve already spent approximately 3 billion dollars. Billion with a B. Even if he built his 35 foot wall from coast to coast, people would just get in a boat and go around it. They do that right now.

HEDGES: Nicol says the idea is completely ludicrous. But despite his and many of his colleagues’ thoughts on Trump’s wall, the idea has taken a foothold not only among Republicans but Democrats too.

NICOL: When the border patrol and customs and border protection were looking for places to build walls. Department of Homeland Security signed a mile count to each sector. So where I live in the Rio Grande valley they assigned a 70-mile count to the sector chief. Sector chief salutes. Looks for places to put walls and you get this crazy hopscotch. Dump a couple miles here then a big gap, then a couple more miles then a big gap. Because the only real interests was we have to meet our mile count.

HEDGES: Nicol’s disappointed that the wall was even being talked about. It’s an obvious and dismal failure he says. Until 2006 when congress passed the Secure Fence Act there were only a few scattered bits of wall across the U.S.-Mexico border. But as politicians have increasing used the wall as a political football during election campaigns, the feasibility of a secure barrier on the border has started to give way to mandates that make voters feel good but do little to address the very real problem of immigration. The results so far is that southern states west of Texas have been able to more easily meet quotas by building on the Roosevelt Reserve which the federal government set aside a decade ago for border activity and which has been the only area truly open to simple construction of the wall.

NICOL: Most of that coverage is in New Mexico, Arizona, California. In Texas you have approximately 115 miles. Even though the Texas border is about 1,200 miles out of that 1,900. The reason that most of the walls got built between El Paso and the Pacific Ocean is because there is what’s called the Roosevelt Easement. So President Roosevelt set aside a 60-foot-wide strip for border security. It’s federally owned so they didn’t have to take anybody’s private property to put up walls. That made it a lot easier.

So in those areas the bigger breaks are where you have a mountain range crossing the border. Texas is mostly like almost entirely private property. I mean overall most of the state; I think 90% is private property. The border is no exception. So no Roosevelt Easement, very little federally owned land aside from wildlife refuges. So all the walls that were built in Texas were basically built by taking someone else’s property.

HEDGES: Class even entered the picture when the government went after poor landowners in cases of land condemnation. While skipping over more wealthy landowners and ranchers who were unwilling to give up their backyards without a costly fight.

NICOL: The ones that they targeted in Texas were mostly poor and minority landowners. That has been proven by University of Texas studies when they looked at, you know, who got their land condemned and who was spared; got a big gap in the wall. A lot of those big gaps correspond with very wealthy landowners. You have the Hunt family; you have the Moody family. You have people who are millionaires and billionaires who have invested in property where the wall would go. Those people will have very good lawyers that will defend their private property rights.

HEDGES: These complications are in spite of measure the government took to streamline the wall says Nicol.

NICOL: Because the environment got in the way, was slowing things down for border walls. Congress gave an unelected administrative appointee the power to waive literally every law on the books to build walls. Immediate he was like oh environmental laws get in the way; throw them out. Ignore the fact that you’re throwing out the Safe Drinking Water Act. So between me and the source of my water which is the Rio Grande, the Safe Drinking Water Act is waived. You know, throw out the Endangered Species Act. But also throw out the Farmland Policy Protection Act. Throw out Native American Greatest Protection Repatriation Act. So we have decided as a nation that this wall, that really does absolutely nothing in terms of immigration or smuggling, is more important than the rule of law in the United States. And we’ve decided that this one unelected official has more power to waive laws and to ignore law, than anyone else in the United States. The President can’t waive those laws; only the secretary of Homeland Security can waive those laws.

HEDGES: Trump still has many details to reveal over the course of the next few weeks as to how exactly he plans to get the wall done. He tats his experience as a New York City developer but understanding the recent history of America’s border wall seems to suggest that the issue has more to do with the political firestorm and a general sense of anger than anything practical.

NICOL: I think that’s the problem is the border and the border wall are nothing but a political prop. They allow politicians and this happens pretty much every election cycle, to thump their chest and say I’m going to get tough on this. This is what happened in 2006. This is what happens pretty much predictably every election cycle. The reality is irrelevant. The problem with that is, the reality that we get the wall and the waiving of environmental laws, that’s real. So to make this political prop we get tremendous environmental destruction. People get their property taken away from them but for nothing.