Is Iran or Netanyahu a Threat to Israel’s National Security? 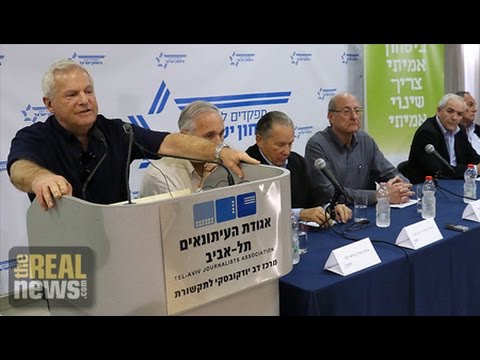 THOMAS HEDGES, TRNN PRODUCER: On Sunday, 180 former Israeli generals and top security officials denounced Prime Minister Netanyahu’s decision to speak before Congress on Tuesday. At the press conference, which took place in Tel Aviv, the group implored the Prime Minister to listen to, quote, experts with 6,000 years of security experience between them, rather than playing a strict game political football before the Israeli general elections, which are set for March 17.

Netanyahu’s Likud party dismissed the former high-ranking officials, calling them, quote, leftists and accusing them of constantly deluding Israel’s foreign policy. But a 2012 documentary called The Gatekeepers paints a very different, much more conservative picture of these retired commanders, many of whom are featured in the film, which focuses on the secretive Shin Bet intelligence agency.

The rift between the intelligence agency and the Likud Party is more likely one between foreign-policy experts concerned with national security and politicians seeking reelection. Netanyahu’s visit, after all, comes on the heels of his AIPAC address, which is crucial to his fundraising efforts. Ninety percent of Netanyahu’s campaign donors, for example, are Americans.

On Monday, Noam Chomsky spoke to Amy Goodman on Democracy Now! about the deeper motivations of Netanyahu’s unshakable opposition to the Iran negotiations.

AMY GOODMAN, HOST, DEMOCRACY NOW!: So why is Netanyahu doing this?

NOAM CHOMSKY, LINGUIST AND POLITICAL COMMENTATOR: Because he doesn’t want to have a deterrent in the region. That’s simple enough. If you’re an aggressive, violent state, you want to be able to use force freely, you don’t want anything that might impede it.