Did Gov. Brown Delay Action on Gas Leak Because of His Sister’s Connections to Fossil Fuel?

Last week, activists in Washington, DC brought several questions to lawmakers in the nation's capital. Among them: Did Governor Brown's sister, who sits on the board of a San Diego-based natural gas utilities company, influence a 74-day delay in California's response to the Los Angeles gas leak?

Last week, activists in Washington, DC brought several questions to lawmakers in the nation's capital. Among them: Did Governor Brown's sister, who sits on the board of a San Diego-based natural gas utilities company, influence a 74-day delay in California's response to the Los Angeles gas leak? 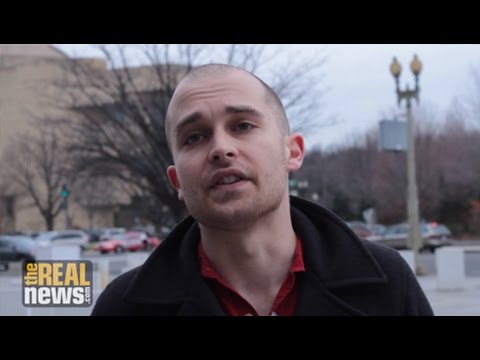 THOMAS HEDGES, TRNN: Last week, activists traveled to the nation’s capital to demand federal intervention in the Los Angeles methane gas leak, which many say is as serious an environmental disaster as the BP oil spill of 2010.

WALKER FOLEY: We were out in front of the EPA today to deliver a message to EPA administrators to use their authority to protect the residents of, say, of Porter Ranch and the San Fernando Valley.

HEDGES: Local residents and consumer advocates from Food and Water Watch say the company SoCal Gas as well as local, state, and federal representatives have been far too slow to respond to the crisis, and it was only through the residents’ own efforts that the gas company even acknowledged publicly there was a dangerous methane leak.

FOLEY: It wasn’t until a group of residents called Save Porter Ranch really exposed the situation to our local electeds that the severity of the situation started to be understood. And then came the press. And Gov. Brown, for 74 days, did nothing.

HEDGES: So far the gas leak has spewed more than 85,000 metric tonnes of noxious methane over the past three months. Methane is a greenhouse gas that is 86 times more potent than carbon dioxide as a driver of climate change.

FOLEY: A lot of these wells are 50, 60, some are even 80 years old. There’s over 100 of them up in the field. And one in particular had pipeline corrosion, sprang a leak, and all of this gas in that storage facility, and there’s 86 billion cubic feet of it, are now pouring out into the atmosphere and into the community.

HEDGES: Residents in and around the Porter Ranch area are also breathing in a slew of chemical compounds because of the leak, like benzene, toluene, and xylene.

FOLEY: Benzene causes cancer. Specifically, it can cause blood cancers like leukemia.

HEDGES: The leak comes from broken piping within the Southern California Gas Company’s Aliso Canyon storage facility north of LA. SoCal gas can’t pinpoint the leak, and says that it could take months for them to do so.

But activists are especially outraged at Gov. Jerry Brown’s hypocrisy as a well-known advocate of the environment, while also doing little to address the crisis in his home state.

FOLEY: Meanwhile he flew to Paris, and talked a big talk about climate change. But he was ignoring the biggest climate catastrophe in his state. And then we find out that his sister, Kathleen Brown, is sitting on the board of Sempra Energy, which is the parent company. And the oil and gas lobby is the biggest lobby in the state of California, has given millions to Brown, his initiatives, his campaigns. And so we certainly think there is grounds to investigate a conflict of interest. As for calling for the governor’s resignation, I think that’s certainly an interesting idea, and I would like to see how all this plays out as we go.

HEDGES: On Saturday, Southern California air regulators failed to take a course of action on containing the methane, furthering the harm to health and the environment that residents and activists want the EPA to put a stop to immediately. Amid the crisis, Food and Water Watch and other environmental organizations don’t want the public to lose sight of the larger goal, which is not only to fix the leak but to fight the surge of fracking and the use of natural gas in California, as well as in other parts of the country.

SCOW: Certainly that makes sense, we have to plug the leak. What we’re concerned about is that will be the end-all, and that is missing the elephant in the room. The elephant in the room is the increased use of natural gas in California, Los Angeles, and throughout the country, frankly. As we’re seeing coal being dwindled down we’re seeing a massive rise of natural gas. And with that increase of natural gas we’ve seen more blowouts, explosions around the country, and certainly the Porter Ranch is on another level. However, the storage facility, there’s about 300-400 facilities like the Aliso Canyon facility that are also in danger of having similar accidents.

So what we need to be doing is phasing out natural gas in favor of renewable energy in California and throughout the country.

HEDGES: For the Real News, Thomas Hedges and Kathleen Carter reporting from Washington.