When ICE is at the Door 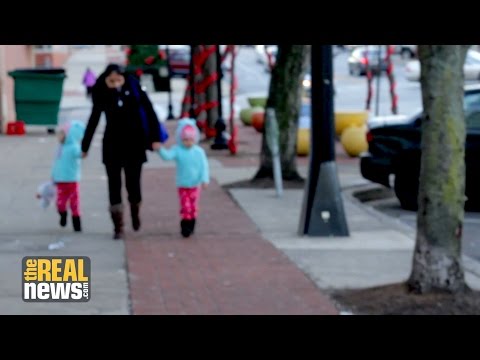 THOMAS HEDGES, TRNN: For undocumented immigrants, the start of the new year was marked by a wave of panic as Immigration and Customs Enforcement, or ICE agents, conducted raids across the country. The surge in raids is part of a new program from the Department of Homeland Security that targets Central American immigrants who have come in huge numbers to the United States in the past two years.

Escalating violence in countries like El Salvador, Guatemala, and Honduras, where dictatorships and the war on drugs happen to have been heavily shaped by United States intervention, have sent many families across the border in search of asylum. In response, ICE is entering residential areas and tailing undocumented immigrants at work, concentrating operations in Texas, North Carolina and Georgia.

RENE MORALES: [Translated from Spanish] My niece was sleeping when they came in and woke her up. She had never woken up to a stranger’s face, she’d only ever woken up to her mother or older sister’s face, when she woke up to two armed agents. That was the first thing she saw.

HEDGES: Rene Morales, whose sister and niece were among the more than 100 immigrants deported since the new year, says that the new round of deportations has many in the community on edge.

MORALES: [Translated from Spanish] To show up without explanation, without reason, they shouldn’t be so aggressive when they enter your home because we do have our constitutional rights. I don’t see why they acted that way.

HEDGES: Fear of raids and apprehensions has expanded far beyond where Morales lives in Georgia. Here in Maryland, undocumented residents that live and work outside of the nation’s capitol have been shaken up by the news.

BALTIMORE RESIDENT: [Translated from Spanish] Most people are afraid to go out right now, because they’ve heard about the immigration agents in the area.

HEDGES: This Baltimore resident was one of the only people to agree to speak on camera with the Real News. Many are afraid to even go out into the street, let alone speak on camera, even under the condition of anonymity.

BALTIMORE RESIDENT: [Translated from Spanish] We’ve heard that many people, many relatives, are sad because their families have been deported.

HEDGES: Thirty minutes away in Hyattsville, Maryland, the culture of fear is intensifying. The Casa de Maryland sits in the middle of a large Hispanic residential area. Here people can get help finding work and English classes. But lately, Casa has been dealing with victims of ICE’s indiscriminate searches through their hotline call center.

RICARDO CAMPOS: This is very shameful, this is a slap to the community. We are very angry of the measures that President Obama’s taking at this point.

HEDGES: DHS hasn’t confirmed any operations in Maryland. But Casa itself has already recorded about a dozen incidents, a handful of which result in apprehensions.

CAMPOS: So far we have received reports of nine people being taken into custody.

HEDGES: Many Latin-American immigrants feel betrayed by President Obama, who ran on a platform of a path to citizenship. Instead, a record-setting 2 million people have been deported during his administration.

CAMPOS: And it’s very shameful that the administration is actually targeting immigrants and family and women that are just looking for a better life, and that are looking for staying alive. We, we have seen that the spike of death and murder in places like in El Salvador, it’s higher than it has ever been before. And you know, people are very scared. People are dying in their countries, people have family members who are being murdered if they don’t pay rent from the gang, or they pretty much don’t have any other option but fleeing from there. Go away from a place where they’re being oppressed, and where they can be killed. And you know, for people out there just to know, like, all of them know what a refugee is. And this is what these families from Central America are. They’re refugees that are looking for–to stay alive.

HEDGES: The stores, restaurants, streets, and playgrounds here are empty during times like these. This undocumented woman, who works in a kitchen nearby Casa says the chilling effect makes living more difficult.

SPEAKER: [Translated from Spanish] We saw the difference this weekend, here at work. Almost no one showed up as they normally would to eat. There’s a lot of fear because of the situation we’re in these days. People don’t want to go out. Parents are reluctant to send their kids to school out of fear.

HEDGES: And this woman was in one of these apartment buildings when ICE raided it. They had a warrant for someone neither she nor any of her neighbors had heard of.

SPEAKER: I heard three or four strong knocks on the door. I got scared. I got up and went to the window to see who it was. I saw a bunch of police officers with civilian clothes,

HEDGES: The indiscriminate raids prompted activists earlier this month to protest the White House’s decision to turn a blind eye to a practice they say separates families and leads others to certain death back in their home countries.

SPEAKER: We have to remember that white people are not indigenous to America. They came here as settlers. So how dare you turn around and tell indigenous communities in this country that they don’t belong here? So anyways, I ask Obama to stop these raids. But I also say for the larger country that we live in, stop saying that people are illegal. Stop turning around and using your racism and xenophobia to criminalize communities.

ANA SOL GUTIERREZ: How can President Obama sit by, be silent about this?

HEDGES: How do you respond to people who say that his hands are tied? I mean–.

GUTIERREZ: They’re not. That’s the beauty, that’s why we’re here. He has the absolute, absolute executive authority to make a phone call, stop the raids. Make a phone call, and grant temporary protective status, TPS status, to all of these families.

HEDGES: Last week the Supreme Court announced it would rule by June on whether or not Obama’s executive actions on immigration from two years ago are constitutional. But whether expanding DACA and DAPA, which defer deportations for immigrant children and parents, will do much to change the state of limbo many families find themselves in is a question that won’t be answered in the near future.

SPEAKER: [Translated from Spanish] When my daughter asks ‘Mom, what’s deportation?’, ‘[It means] if they deport me, I won’t come back here. I don’t know who you would stay with.’ Because the government won’t tell me if they’d send my three children back to me. The government won’t tell me if they’re someplace stable with someone I know. The government might send them to a children’s home, and then figure out what to do with my children.