The Untold Story of the Nation’s Biggest School Cheating Scandal 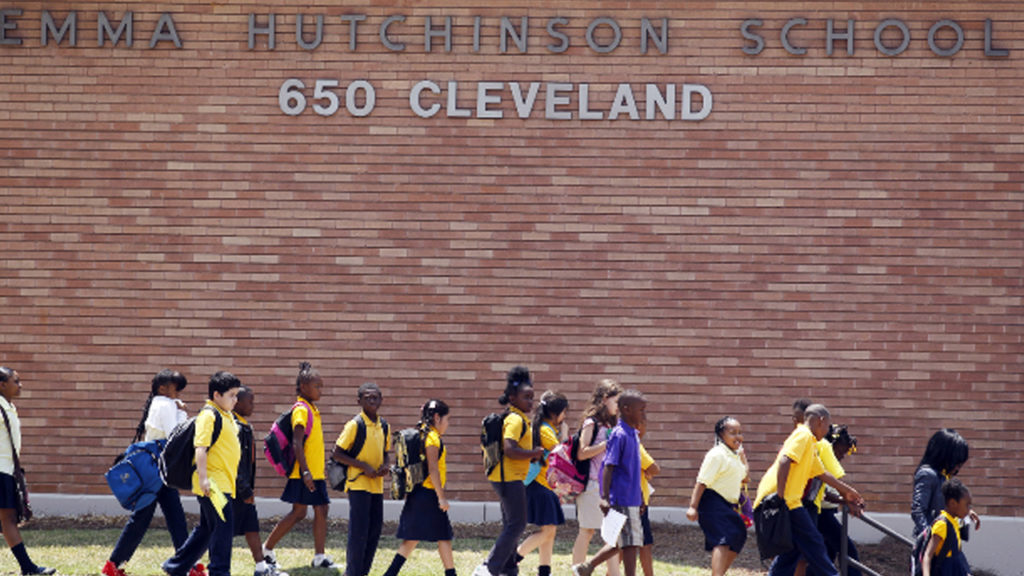 JAISAL NOOR: And I think one of the really incredible things about this book is not only does it tell your story, but it tells the story of Atlanta itself, the history of Black communities there, and the multiple assaults they’ve faced– the social, economic political, all these different forces at play here. I just wanted to step back before we get into the trial, the investigation, and how this all proceeded. Talk a little bit about where this all unfolded because this also happened– the cheating was alleged because the cheating said they found a huge increase in test scores. Those were some of the schools with the highest levels of poverty in a lot of the neighborhoods that you talked about are in the process of being displaced or neighborhoods are being relocated. Can we step back and talk about that history?

SHANI ROBINSON: Well in the original G.B.I. report, the investigative report, there were 44 schools that were implicated in this scandal. Eleven of those schools are where teachers and administrators were actually pulled from to later go on the RICO indictment. If you look at those communities where those schools are, many of them were in thriving Black communities in the 1940s and 50s, which is why the book is so important so we can take a step and look at how these communities were systematically dismantled. There were several Black-owned businesses. It was safe. People rarely locked their doors. But as more Black people started moving to the city, more white people started move into the suburbs, it yielded this greater Black political power. This was something that was concerning to white business elite. So they come up with this plan called The Lochner Plan, which was basically a plan for highway construction to rip right through many of these thriving Black communities. There were hundreds of homes that were taken through eminent domain, thousands of people were displaced from their home, and this is just the beginning of the dismantling of those communities. You have the drug wars. You have mass incarceration. There was a veteran teacher who told me that before the crack epidemic, the children came to school prepared, the parents wanted to be involved in their children’s education so much that they had to put the parents on a waiting list because they just wanted to be involved. Everything changed after that. It was really disheartening that during the trial and as far as some of the media coverage, it seemed as if educators were being blamed for just how students were cheated and they were cheated in so many different ways. To put all of the blame on educators, we were really scapegoated at the end of the day.

JAISAL NOOR: The book also talks about how the Atlanta Public School system was also giving subsidies to real estate developers, while this was all happening. I’m talking about hundreds of thousands or millions of dollars of education money going to developers, and how that helps fuel this crisis as well. While this was happening, there was also cutbacks to the schools as well from the Governor. Can you talk about that a little bit?

ANNA SIMONTON: Yeah. So Atlanta has something called tax allocation districts, and this is something that other cities have as well. In many places it’s called tax increment financing, or TIFF.

JAISAL NOOR: Yeah. We have that here.

ANNA SIMONTON: Right, so it’s worth looking into because that money is property tax dollars that are supposed to go to the city, the county, and the school system. And instead, they go into a slush fund for private development. In Atlanta, the school system has missed out on $434 million since the year 2000 to pay for things like a project called the Beltline that is a Rails-to-Trails project. It’s called a “glorified sidewalk” sometimes, but it’s one of the largest drivers of gentrification. The hype around oh, the Beltline is coming to this neighborhood, has really been a huge factor in driving up the property values in historically Black neighborhoods and displacing the very children that those funds are intended to educate. It’s been used to build luxury condos, boutique retail, and office development. Hard Rock hotels were in the works up to a point when it was actually challenged in court. The Georgia Supreme Court said yes, it’s unconstitutional to use education funds for anything that’s not related to education. But our lawmakers turned around, introduced a resolution to put a constitutional amendment on the ballot, which voters passed because a lot of interest, including real estate developers, donated money to a campaign to support this measure, putting a lot of flowery language around it about how it will help bring together education and positive development and things like that. So the actual state constitution was amended to allow these education funds to be continually used for gentrification, essentially.

JAISAL NOOR: And so, Judge Baxter called the cheating scandal the “sickest thing that’s ever happened to this town.” Your response to that?

SHANI ROBINSON: [Sigh] Again, I think that it goes back to people wanting to scapegoat educators. I thought his comment was ridiculous. He apparently forgot about things like slavery and Jim Crow. Even his behavior during the trial, it was unlike anything I’d ever seen. I don’t know if you went to get into some of the things that happened but…

JAISAL NOOR: Absolutely. In the book you talk about how the media paid little attention, the numerous times the case was almost dismissed, repeated calls for mistrial, examples of prosecutorial misconduct, witnesses who perjured themselves. You give lots of samples of that in the book and some who recanted while on the stand. There were state’s witnesses who on the stand said, I said this under pressure to get this plea deal. So talk about Judge Baxter who played prominently in this case.

SHANI ROBINSON: Right. So we were facing decades in prison. I was facing 25 years. Some of my co-defendants were facing up to 40 years in prison. Initially when we turned ourselves in, my bond was set at $200,000. Some of my co-defendants’ bonds were in the millions. We couldn’t even afford to bail out. And so, pretty much what they did was they said okay, we’ll lower your bonds as long as you can be placed under a gag order. After the gag order was lifted, the judge suggested that we still not speak to the media. We never really got a chance to tell our side of the story. But during the trial, he had a private conversation with the district attorney.

JAISAL NOOR: Which is not supposed to happen.

SHANI ROBINSON: No. This is not supposed to happen. The district attorney by the way, his wife worked at a school where cheating occurred. But she was never indicted. No one from her school was ever indicted. It was really a conflict of interest for him to prosecute this case. The judge had a private conversation with the district attorney. Of course, our attorneys asked for a mistrial and he said no. And then there was a situation where he actually tried to assist a state witness with identifying one of my co-defendants who was told that she could step down from the witness stand and walk around the courtroom to see if she could identify my co-defendant named Tamara Cotman. And so, the woman gets down, and starts walking around, and the judge calls out to her and says, “you’re getting cold.” So the woman turns around, and starts walking in the opposite direction. She never recognized Ms. Cotman and eventually returned to the witness stand. Of course the defense attorneys said, Judge you can’t do that. He said seriously she “is cold.” We had to deal with things like that. Later after we were convicted, because there were twelve of us on trial, eleven of us were convicted, and the judge tried to bully my co-defendants into taking the district attorney’s sentencing agreement which included giving up their constitutional right to appeal. Initially the judge said that he would grant a first offenders status and an appeal bond, but once he learned that many of my co-defendants were basically saying no, we’re not going to take that. He took it back and he said, I’m not granting an appeal bond or first offender status. And the defense attorney said, but Judge you’ve already promised them this. He said, well I guess I’m just an “Indian giver.” So these were the types of things that we had to deal with during the trial.

ANNA SIMONTON: And altogether, I think the cumulative effect of that was to just totally demean and diminish the defendants in the eyes of the jury. His behavior everyday was full of these antics and reported on in the media with this kind of glee around his buffoonery as if it was part of the spectacle and funny to everybody, but it was no laughing matter. It was people facing decades in prison.

SHANI ROBINSON: And there was also prosecutorial conduct. The lead prosecutor– her name was Fani Willis. She was caught making facial expressions to the jury and to some of the state witnesses. People kept telling the judge hey, we see her making these facial expressions. And he said, well I didn’t see anything. But finally towards the end of the trial, he actually caught her and he said, Ms. Willis, you need to stop making facial expressions toward the jury. We’re thinking, how long has this been going on? There was a lot of judicial misconduct, prosecutorial misconduct, that took place in this trial.

JAISAL NOOR: And so, you’re currently appealing your conviction. That’s finally moving forward, from what I understand. Two other defendants’ appeals were just denied. Can you talk about what happened?

SHANI ROBINSON: Right. They appealed the case all the way to the U.S. Supreme Court, but unfortunately the U.S. Supreme Court did not hear the case. These two codefendants had to turn themselves in to prison in October. They’ve been in prison since October and they have children. One of them has– I think he’s about 14-years-old, a middle schooler. I can just imagine what he’s going through, not having his mother at home at such an impressionable time. But those two co-defendants handled the appeal in a different way. We’re still hoping that, number one, we can get the judge off of this case.

SHANI ROBINSON: Yes. Our attorneys have asked him to recuse himself. He refuses. He actually retired and they reassigned our case to another judge. But somehow, this same judge has been allowed to remain on our case. We have no idea how this is happening. They’ve even taken the issue to the Georgia Court of Appeals. So far, they have done nothing. We’re just hopeful that at some point someone will take a hard look at what actually happened and take it seriously because so many things were done incorrectly in this case. He can’t be impartial. Right before the verdict was released, he told the jury, whatever your verdict is I will defend it until I die. So it’s hard to believe that he can continue to be impartial.