The Rise of American Islamophobia 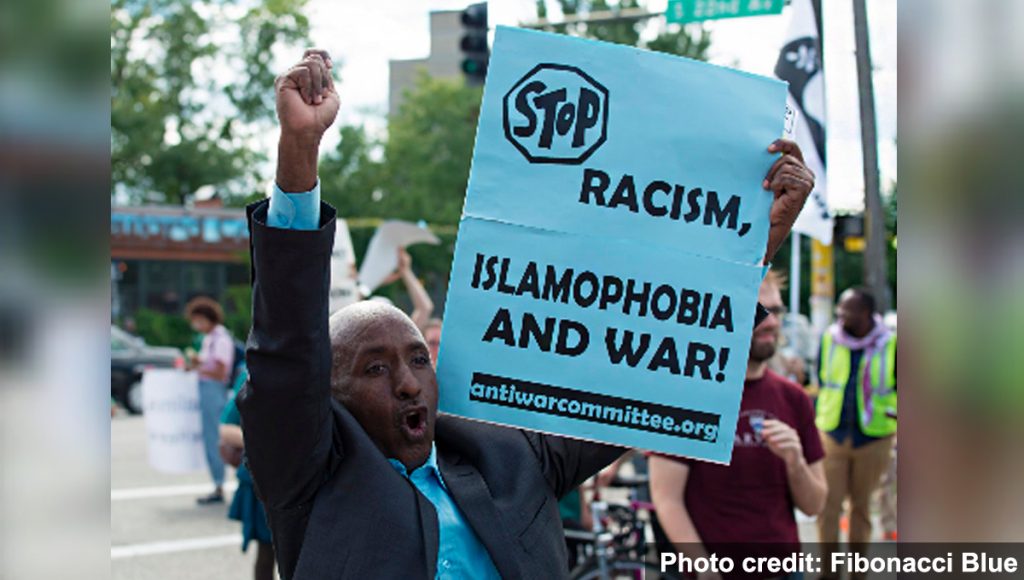 A new book titled “American Islamophobia: Understanding the Roots and Rise of Fear” by Khaled A. Beydoun tackles the issue of anti-Muslim and anti-Arab sentiments in America, a very prevalent problem especially after the 9/11 attacks, about which surprisingly few books have been written. To discuss his book I’m joined by Khaled A. Beydoun. He is an associate professor of law at the University of Detroit’s Mercy School of Law. Thanks for joining me, Khaled.

KHALED BEYDOUN: Thanks for having me.

SHARMINI PERIES: Khaled, in what way is Islamophobia inherently different from other forms of discrimination? Say, anti-black racism or anti-Semitism, or even xenophobia. These are prejudices. But why is Islamophobia so different?

KHALED BEYDOUN: There’s many, there’s many parallels but some of the distinctions I think will rest along how Islam is religion, and Muslim identity is imagined by not only private individuals who engage in this discrimination but also the state. So Islam, on one hand, is racialized. I think there is a, you know, prevailing kind of racial caricature that drives Islamophobia by private individuals. It’s viewed as a clashing civilization, in some regards. And it’s also viewed as a conflicting political ideology. So it’s distinct from how we think about maybe, you know, African Americans or Jewish Americans because it’s a class of people who is, you know, othered or distinguished along at least three distinct tracks: race, civilization, and religion. And there’s a deep history as to how the religion and its followers have been distinguished and othered.

SHARMINI PERIES: Khaled, Islamophobia has a very specific and particular history here in the United States because of the Nation of Islam, because of Malcolm X and Louis Farrakhan associated with that movement, and of course those roots are also playing itself out in the form of Arab Islamophobia that you’re speaking of today. Draw the difference between the two and speak about this specific history of the United States.

KHALED BEYDOUN: Yes. So you know, Islamophobia as a as a form of animus or hate or othering, it’s a novel term right. So the way that it’s been framed, the way that it’s been deployed is distinct after specifically the 9/11 terror attacks and the enforcement of the war on terror that comes after the 9/11 attacks. Now, what you’re talking about is how black Muslims were othered and sort of demonize beginning in the 1950s and ’60s, specifically with the emergence of the Nation of Islam and how, you know, black Muslims, that term came to take on a specific loaded definition and meaning from the vantage point of the state.

Now, what I do with this book is, the way I grapple with the distinct forms of Islamophobia and how it’s experienced by distinct groups on grounds of racial identity being one of the primary intersections is to define a new framework for understanding Islamophobia, right. You have private Islamophobia, which is the Islamophobia, the animus, the fear, the othering done by private individuals, private citizens, where there still is a very specific racialized caricature that controls how they think of, how they imagine Muslim identity, largely conflated with Arab and Middle Eastern identity.

Now, the second form, structural Islamophobia, or state-sponsored Islamophobia, is distinct because I think the state now, especially as a consequence of the 9/11 terror attacks, has a, has an evolved, more nuanced understanding of Muslim identity which embraces the idea that Islam and Muslim America is diverse along racial lines, diverse along socioeconomic lines, diverse along sectarian lines. So that caricature that I was talking about specifically with private individuals or private Islamophobes is less the case now from the vantage point of the state. They understand the full breadth and racial diversity of us in whom Muslims are.

And then finally, Islamophobia is a dialectic. It’s where, it’s a process whereby state policies like the Patriot Act, like the travel ban, communicate specific messages about the faith and Muslims to the polity, to private citizens. So there’s, there’s that complexity, I think, that’s important for us to understand how Islamophobia is distinct depending on depending on the perspective of who it is conducting or participating in the project of Islamophobia.

SHARMINI PERIES: Now, one would call that systemic racism or systemic Islamophobia because it’s one thing to have certain discriminations against a group of people, but it’s another thing to actually have state power to implement them like the Muslim ban. Talk about that a bit more.

KHALED BEYDOUN: Yeah, great point. I think, I’m glad you brought that term, systematic, institutionalized Islamophobia, akin to how we think about racism. So private individuals, private citizens, don’t act with the weight or behind the power of the state. State agencies do. So with regard to systematic Islamophobia or structural Islamophobia we see it through the enactment of policies like the travel ban, like the Patriot Act. There was a policy that was enacted after 9/11 called NSEERS, which was tantamount to a Muslim registry. You know, that, that candidate Trump talked about wanting to enact. It was on the books well before Trump became president. And also programs like counter-radicalization policing, surveillance programs, and specifically one established by President Obama in 2011 called Countering Violent Extremism.

So these are government policies, programs, laws, presidential rhetoric, presidential positions that are driven by this foundational Islamophobia, Islamophobic baseline, that Muslim identity is correlative or presumptive of terrorism. And what’s key to understand about structural or systematic Islamophobia is that it is practiced beyond how we kind of caricature or imagine who the Islamophobes are. Islamophobia is typically conflated with conservatives or Republicans, but it’s key to see that systematic or structural Islamophobia is also extended, enforced by individuals on the left, President Obama being a classic example through the passage of the surveillance program called Countering Violent Extremism.

SHARMINI PERIES: All right, Khaled, let me ask you a somewhat of a theoretical question as well. In your book you say that Islamophobia is rooted in Orientalism, and you quote Edward Said’s famous book on Orientalism as being not enough to explain the kind of the dynamics of Islamophobia today. So separate the phenomenons for us, and tell us about the Orientalist notions of Islamophobia and how we are experiencing it today, and why is it so different from the kind of colonialist Orientalism that Said describes.

KHALED BEYDOUN: Yes. So the first thing, one of the first takeaways from this book and the theoretical work that this book tries to do, is to argue that Islamophobia, this modern form of animus and violence and hate that is obviously pervasive today is a direct extension, a theoretical, epistemological, political extension of Orientalism, right. Orientalism is this master discourse whereby policymakers, artists, writers, thinkers from Europe eventually came to define themselves and define their sphere, defined Europe and the West and mirror opposite terms to the Orient. The Orient was synonymous with the Muslim world. So Orientalists believed that if the United States and Europe was the bastion for modernity, progress, democracy, the Orient, the Muslim world, had to be the bastion for tyranny. It was static, it was perpetually wedded to war, and so on. So the way, the way the Muslim world was defined was in near opposite terms to the west.

What Islamophobia does is they give them a new face. They cloak them and dress them with new terms, with new, with new sorts of threats, and so on. But the essence of the stereotypes remain the same.

SHARMINI PERIES: Khaled, there’s been a lot of debate about adopting certain Islamic laws in the lifestyles of people that live in the West, in the diaspora.

And yet there’s been a lot of resistance because of the embedded inherent discriminatory factors in that law, especially towards women. What do you make of it, and what do you think of Islamic law being adopted here in the United States?

KHALED BEYDOUN: Well, there have been, like, scare tactics. And even more than scare tactics. You know, entire kind of scare and scapegoating campaigns that have been deployed, initially with the Tea Party and then obviously carried forward by, you know, politicians who have been sympathetic, or at least, you know, adopting this clash of civilizations-type worldview that we see Trump not only engage in, but engage in to great success with his presidential campaign, and now his administration.

So your question brings to mind, directly brings to mind these anti-Sharia bills that were brought in the beginning of 2010. States were passing bills to outlaw and categorically condemn the practice of Sharia law, even though it is a violation for the state, whether it be city government or state government, even federal government, to practice or enact any form of religious law, whether it be Islamic, whether it be Judaic, whether it be Christian, because it would be a violation of the First Amendment establishment clause. All lawyers know this. All legal analysts know this. However, people on the ground, people on the ground don’t know this. However, politicians capitalize on this ignorance on the part of voters. They kind of continue with this message that the West is being threatened by Islam, and that Sharia law is one way in which the West can be overtaken, the United States can be overtaken by this big old bogeyman we understand is Islam and Muslims.

So it’s a political scare tactic that legally isn’t palatable. However, it’s politically, deeply politically resonant because it mobilizes voters to vote for populist candidates, but also politicians who capitalize on this fear of Islam to mobilize and galvanize voters. So that’s how it’s been deployed, and effectively, I think. There’s been a manipulation of the fear of Islam on the ground to deliver specific politicians into office.

SHARMINI PERIES: I’ve been speaking with Khaled Beydoun. He iss the author of “American Islamophobia: Understanding the Roots and Rise of Fear.” I thank you so much for joining me today.

KHALED BEYDOUN: Thanks so much for having me. I really appreciate it.

Khaled A. Beydoun is a law professor and author of American Islamophobia: Understanding the Roots and Rise of Fear. His work has been featured in top law journals, and newspapers including the New York Times and the Washington Post. He is a native of Detroit, and tweets at @khaledbeydoun.

How Trump and Netanyahu Undermine Freedom of Speech

Where Do the Politics of Reparations Go From Here?