In a discussion about the Pittsburgh synagogue massacre and the growth of fascism in the United States, Paul Jay says the degeneration of American political and economic institutions is being ignored by corporate media that instead focuses on Trump and individual acts of terror - From a live recording on October 29th, 2018

In a discussion about the Pittsburgh synagogue massacre and the growth of fascism in the United States, Paul Jay says the degeneration of American political and economic institutions is being ignored by corporate media that instead focuses on Trump and individual acts of terror - From a live recording on October 29th, 2018 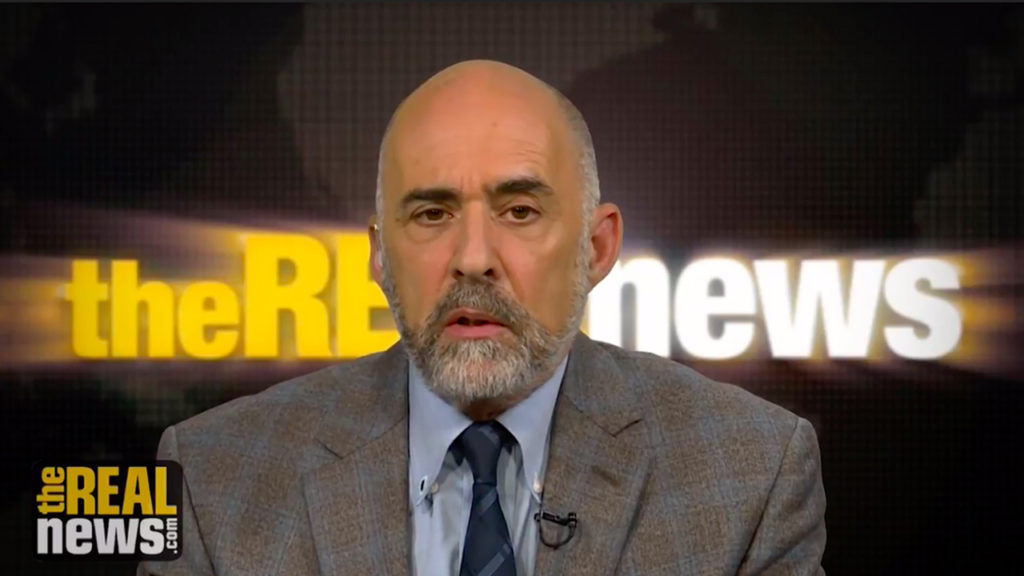 BEN NORTON: It’s The Real News Network, and I’m Ben Norton. I’m joined by Paul Jay today, who is the executive editor of The Real News, and the founder. And we’re going to talk about the horrific massacre in Pittsburgh on October 27. A neo-Nazi carried out a massacre, killing 11 people and injuring 6 more. Many of the victims at the synagogue were actually elderly and disabled. They had arrived early. This is the Tree of Life synagogue in Pittsburgh, Pennsylvania.

The suspect, who is an avowed neo-Nazi, his name is Robert Bowers. And during the attack Bowers shouted, quote: “All Jews must die.” Bowers was a regular poster on the social media website Gab, which is popular among the alt-right. And on there he regularly posted Nazi propaganda and anti-Semitic propaganda. He also praised some of Donald Trump’s policies, specifically his anti-immigrant policies, his crackdown on Muslim immigration, and his crackdown on immigration from Latin America, from Central and South America. Bowers, the alleged shooter, also claimed that Jews were part of a conspiracy to encourage immigration to the U.S., supposedly to decrease the white population. And he targeted the synagogue partially because it worked with a pro-refugee organization known as HIAS. And ironically, this organization was actually founded in the late 1800s to support Jews who were fleeing anti-Semitic pogroms in Russia. Today this synagogue is affiliated with HIAS, and is known for its work helping refugees and immigrants.

In response to this massacre, Donald Trump the U.S. president, condemned the attack. However, local Jewish leaders in Pittsburgh and other parts of the country condemned Trump, and in fact, the group Bend the Arc, which is a progressive Jewish organization that also is affiliated with the synagogue in Pittsburgh, published an open letter to Trump denouncing him, saying that he is not welcome in Pittsburgh and saying that Trump will only be welcome under the condition that he forcefully condemns white supremacists, and also stops inciting violence against ethnic or religious minorities; not just Jews, but also immigrants and Muslims.

So I’m joined by Paul Jay. Paul Jay is the executive editor of The Real News and the founder, and we’re going to talk about what this means, and the growing fascist threat in the United States and throughout the world. Thanks for joining me, Paul.

BEN NORTON: So, Paul, I’m wondering- let’s maybe we can just begin talking about this suspected gunman Robert Bowers. He chanted “All Jews must die” when he was attacking the synagogue. And very explicitly he wrote on social media that he was targeting Jewish Americans and the synagogue because of their support for immigration. And also, of course, he harbored these extreme anti-Semitic Nazi views. Can you respond to this horrific attack?

PAUL JAY: Well, if all Jews must die, I guess I’ll be one of them who dies. You know, my background is Jewish. But you know, when we talk about the growing fascist threat, as horrendous as these attacks were, and as horrendous as attacks of these mass shootings that we’ve seen over and over again in the United States over the last few years- this one seems to be more horrendous because it has such a supposed political intent; directly anti-Semitic, and raising issues like immigration and such.

But these are deranged characters who go and commit these killings. The growing fascist threat in the United States is not these type of deranged Nazis, who have been around for decades. This may be unprecedented to go into a synagogue and kill so many people, and horrendous, but these kinds of Nazis have been advocating this kind of hate, this kind of open, racist- marginal open racist groups who advocate violence against, whether it’s Latinos, or blacks, or in this case Jews. This isn’t really where the growing fascism is to be found.

And it’s easy for various people in the media, particularly, to kind of latch on and then raise great philosophical questions. I heard on cable TV this morning someone was saying the very soul of America is at stake. Well, yes, the very soul of America is at stake. But it’s not because of these kinds of individuals who are, you know, it’s a form of insanity, commit these kinds of crimes. The reason the soul of America is at stake is because the whole system is reaching a stage of such inequality, such parasitism. The there was a stat in the Guardian the other day that the wealth of the billionaires of the world increased in 2017 by- just the increase in their wealth, not their total wealth. Just the increase was the same amount as the entire GDP of Spain.

That’s the roots of the growing fascism. This massive inequality, this massive parasitical Wall Street, where so much of the world’s wealth is simply put into casino capitalism. That decay, if you want, one of the most, the best representations of the decay of the American and global system is that this great ally Saudi Arabia- I mean, it’s not just about killing this one guy, Khashoggi, which- you know, he died in a horrendous way. But the American culture is so, what’s the word, so xenophobic and so decrepit that what’s going on in Yemen with the thousands and thousands of people being killed by the Saudis, supported by the United States, a famine. And let’s not forget the way people close their eyes here to what the Israelis have done in Gaza. The killing of the kids that come towards the fence; the every few years what they call ‘mowing the grass,’ where they bomb the hell out of Gaza. If you want moral blindness to the, what the US empire- I don’t know what other words you can use for it- this is this is the product of a system that’s really, really degenerating.

And so, yes, these individual neo-Nazis, what they do is horrible. Yes, I don’t think there’s any question that the fact that a climate denier Trump, with the kind of language he uses against people, helps create an atmosphere where these crazies feel emboldened. But we need to look- if you’re going to talk about the soul of America, then you need to look at the systemic roots of the rot, and not just at, you know, these very marginal individuals, as horrific as the crimes they may commit.