At a diverse town hall meeting, Baltimore teachers, students and small-business owners say the Republican plan would wreak havoc on their lives and deepen inequality across the country

At a diverse town hall meeting, Baltimore teachers, students and small-business owners say the Republican plan would wreak havoc on their lives and deepen inequality across the country 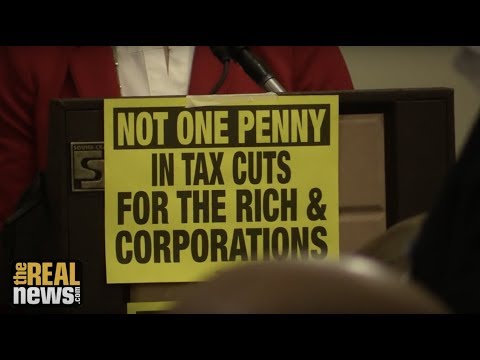 ELIJAH CUMMINGS: There’s something wrong with the picture when you tell teachers, who simply want to buy some supplies for their students, that they’re not going to be able to deduct $250. Come on, give me a break. While at the same time, giving the rich more money.

TAYA GRAHAM: This is Taya Graham, reporting for the Real News Network, here in Baltimore City, Maryland. Graduate students. The homeless. Small business owners. This diverse group has gathered with Indivisible Baltimore to discuss the GOP tax cut plan, which they believe will not meet their needs.

As the Republican tax plan heads to a vote, the rhetoric offered to sell the proposal has been focused on help for the middle class. But in Baltimore, at a town hall to discuss the implications of the bill, the middle class appeared to be in the cross-hairs.

ROBERT BARTOLINI: This fraud of $4,000 raise when the corporations … I mean, who, obviously believes … It’s incredible that anyone believes it.

TAYA GRAHAM: The tax plan itself is replete with breaks for the top 1%, a big cut for large corporations, and the elimination of the estate tax for all but the wealthiest.

Speaker 5: Congress’ own joint committee on taxation revealed that anyone who earns less than $75,000 per year will actually see their net income go down under this proposal.

TAYA GRAHAM: A piece of legislation that will heighten the country’s already historic income inequality, which is why the progressive political group Indivisible organized this gathering Monday, to not just delve into the details, but to help people share their personal stories to explain how a single piece of Republican legislation could wreak havoc on their lives.

BONNIE RAVEN: All these cuts with the Trump tax plan are going to create a lot more homelessness in Baltimore, and we already don’t have the capacity to deal with the homeless people we already have.

TAYA GRAHAM: Stories like a Johns Hopkins doctoral student who will lose a key tax break that will make her studies unaffordable.

ALISON OAKS: I would like to preface it by saying I’m really fortunate to be pursuing a PhD, and realize it’s an incredible privilege. In order to do that, though, I rely on a tuition waiver. What that means is that every year, annually, my tuition to Johns Hopkins Bloomberg School of Public Health is waived, and I’m not taxed on that tuition money. Each year I pay tax on my stipend, which is about $22,000, but I am not taxed on that tuition money, which is about $52,000. With the proposed bill, if it were to pass, I would be taxed on about a $75,000 annual income and would only end up with a take-home pay of about $5,000 annually.

TAYA GRAHAM: Or affordable housing advocates that say a key tax incentive in the bill will only exacerbate the city’s lack of low-income housing.

ADRIANNA: Some of the largest funding sources that help to preserve the existing affordable housing, or develop new affordable housing … Those resources like low-income housing tax credit, and government issued bonds … Those will be diminished. Because we’re already facing a tremendous housing crisis, where so many people throughout the city and beyond and facing housing instability, it’s going to be a huge loss.

TAYA GRAHAM: Or a small business owner who may not be able to afford health insurance due to Republican plans to cut the Obamacare mandate.

ELEANOR GRAVES: They are going to repeal the mandate, I understand, is the proposed … That will, again, throw the exchange market into chaos, which … I participate in the health care exchange in Maryland, and I just, in fact, got my notice that my premiums are going home by a lot.

TAYA GRAHAM: And two Baltimore special education teachers who are forced to buy supplies for their students, but will now lose a tax credit to help ease the cost.

CHRIS: The current tax code allows teachers to deduct $250 from the taxes, which is a thankful offset. We appreciate that. Even with this deduction, often, more times than not, that’s already spent by, even, the first day of school, if not exceeded. The tax break does allow us to then put that money back into schools for the next year. It’s especially true here in Baltimore City, where so many of our students are already low-income. Parents, students alike. It’s already difficult for them, alone, to afford the resources and the materials that we would also be getting for them as well.

TAYA GRAHAM: It was a myriad of stories that transcended politics and revealed the human toll of what many called a short-sighted policy that will leave a country even more divided and unequal.

ELIJAH CUMMINGS: Apparently this is a group, as [inaudible 00:04:38] was just saying, that seem like they don’t value the things that we value.

TAYA GRAHAM: This is Taya Graham and Stephen Janis reporting for the Real News Network in Baltimore City, Maryland.