Advocates delivered a petition to Baltimore finance officials to demand $40 million per year to fund affordable housing and fix blight, part of plan they say will restore equity to a city that has doled out big tax breaks to wealthy developers

Advocates delivered a petition to Baltimore finance officials to demand $40 million per year to fund affordable housing and fix blight, part of plan they say will restore equity to a city that has doled out big tax breaks to wealthy developers 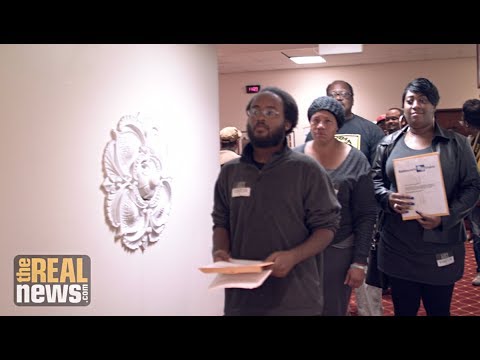 TAYA GRAHAM: This is Taya Graham reporting for the Real News Network in Baltimore City, Maryland. Baltimore City activists have finally said enough is enough and are demanding that the city give residents money to invest in their community, not wealthy developers. A quick survey of the Baltimore City skyline reveals in stone and mortar what public tax incentive can produce. But the problem with this rising tide of gleaming towers is that the new construction is only widening the gap between the rich and poor, says community activist, Destiny Watford.

TAYA GRAHAM: Incentives funded by residents who can’t afford to live in the buildings their tax dollars produced.

BONNIE ORRAVENLEE: I’m here because I am pissed off and I am outraged because people are dying in the street every day.

TAYA GRAHAM: And who are now demanding change.

TARELL ASKEW: We need for our city leaders to be more than leaders at the podium. We need for them to join us and this great cause of building the city into a better place to live and building us all into better people to live in it.

TAYA GRAHAM At City Hall today, a broad coalition of housing activists and public justice groups gathered to seek funding to bolster affordable housing and set aside money to take down vacants and fix blight. The Real News was there earlier this year when the group announced the plan, called 20/20. The plan proposed a fund of 20 million dollars for affordable housing and 20 million dollars to fix vacant homes in the form of an annual appropriation, fraction of what the city is spending on luxury development, advocates say. But a plan, they say, needs action now as the city’s 2018 budget process begins. Back then, the mayor expressed support.

TAYA GRAHAM Although some had concerns if she remains in their corner.

Do you think you have the mayor’s support on this?

DESTINY WATFORD: So, interesting question. The mayor was actually at one of our biggest events where we invited everyone, our neighbors, our friends from all over the city, and basically said, “Hey, we need 20/20 , which is our campaign for community development and for investing 40 million dollars in our blighted neighborhoods.” The mayor spoke at that event and she said that our campaign was something that we need in Baltimore.

SPEAKER: We urge the mayor today to include this in the budget for 2018 to put people in healthy homes and create partnerships and pathways to homeownership.

TAYA GRAHAM: It’s an idea that has some support from the council.

COUNCILMAN ZEKE COHEN: In Baltimore, we are staring down the barrel of an affordable housing crisis in our city. We do not want to go the way of Washington DC, New York City, San Francisco and all the other cities that have developed but displaced so many of the working poor people that built those cities.

TAYA GRAHAM: But to drive their point home, supporters swarmed the City Finance Department and handed their petitions directly to finance officials.

STEVE KRAUS: Is this where you want to be?

SPEAKER: We came to deliver these 20,662 petitions in support of the 20/20 Campaign for Affordable Housing to Director Kleine. To direct this and this deliver to you?

SPEAKER: You can. You can.

STEVE KRAUS: We wanted to ask him and the Budget Office how they intend to put the 20-20 Campaign into the budget.

TAYA GRAHAM: A peaceful act of dissent to let City Hall know that the policies of the past are not the solution they want for their future.

TAYA GRAHAM: This is Taya Graham, Stephen Janis and Cameron Granadino for The Real News Network in Baltimore City, Maryland.

November 13, 2019
Sign Up for Our Newsletter
Help Us Make Real News!