Maryland Governor Seeks to Keep Barrier to College for Ex-inmates

A bill that would allow returning citizens to exclude their criminal record from initial college applications was vetoed by MD Gov Larry Hogan, now supporters want legislators to override it

A bill that would allow returning citizens to exclude their criminal record from initial college applications was vetoed by MD Gov Larry Hogan, now supporters want legislators to override it 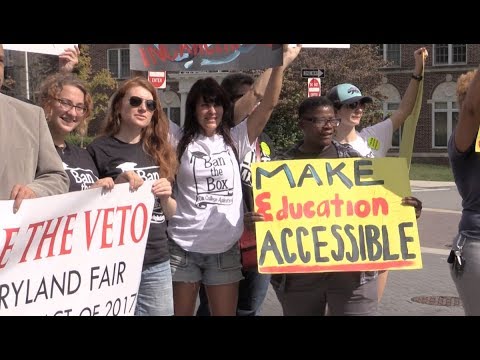 TAYA GRAHAM: This is Taya Graham reporting for The Real News Network in Baltimore City, Maryland. Should a criminal record mean a life sentence without an education? That is why protesters gathered here today to ban the box.

TAYA GRAHAM: For a country that incarcerates more people than any other nation in the world, there is often little help after release.

NICOLE MUNDELL: We know that access to an education reduces recidivism. We know in particular for women post-incarceration, a fair access to college gives us the ability to raise our children with dignity.

TAYA GRAHAM: And one Republican governor hopes to maintain that policy by making it more difficult for people who’ve served time to get into college.

CURT ANDERSON: I’ve always thought that once a person is convicted, sentenced, serves their time, serves their probation, that’s it. You’ve paid your debt to society. You don’t have to around the next several years of your life with another debt hanging over your head, whether it’s, you know, because you had a criminal record.

TAYA GRAHAM: Last year Maryland legislators passed a law that would have allowed people with criminal records to exclude that information from their initial applications. It’s an idea called Ban the Box that has widespread support, but earlier this year Republican Governor Larry Hogan vetoed the bill without explanation.

So why do they have to override a veto? What’s going on? Why did Hogan have a veto to begin with?

CURT ANDERSON: You know, I can’t speak for the governor. I’m sure that he heard from some of his conservative colleagues and probably just voter, you know, I mean, he’s a conservative governor. So you gonna get that.

TAYA GRAHAM: Which is why advocates gathered over the weekend in Baltimore to urge legislators to override the veto.

TINA CARROLL: I think education is important for all people. I think it’s especially important for persons who are coming out of the system and looking for opportunities to better themselves, to make a new life, and when you have these barriers, it just sets you potentially right back to where you were before.

TAYA GRAHAM: Many shared personal stories of how higher education helped them find purpose and employment.

NICOLE MUNDELL: Seeing her mother, her mother able to deal with all of the issues that life has brought her way and seeing her overcome those barriers, and then still seeing her mom pursue a post-secondary education is profound. At that point, it shows her that it’s reachable and it may not be so challenging.

TAYA GRAHAM: A stepping stone to better things, including State Delegate Curt Anderson, who says he believes the Democratically-controlled Legislature will override the veto.

CURT ANDERSON: You’ve already gone to jail or you’ve already served probation. Why should there be any other collateral consequences? This is one of those consequences, and I don’t think it should stand.

TAYA GRAHAM: A promise many say must be kept to balance the scales in a country more comfortable with jailing its citizens than enlightening them.

NICOLE MUNDELL: Access to education without the fear of discrimination based on one’s past mistakes really gives us the ability to lead in our communities, raise our children and economically contribute to society.