Protesters demand more affordable housing for Port Covington, a project to be funded with a $535 million tax break

Protesters demand more affordable housing for Port Covington, a project to be funded with a $535 million tax break 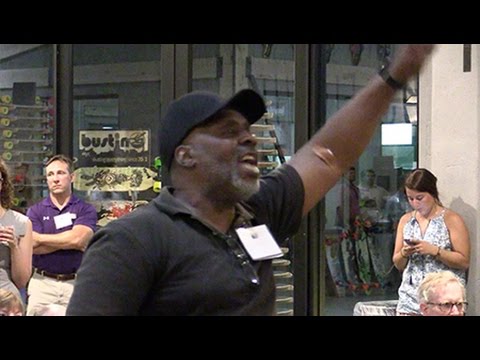 I’m here at Port Covington, where developers are asking for a historic tax break. But this evening, community concerns intruded.

If Baltimore is indeed two cities, one rich and one poor, then nowhere was this divide more evident than at City Garage in Port Covington Tuesday Night. Inside, revelers enjoyed wine and cheese prior to a presentation from Sagamore Develop president Marc Weller on the details surrounding his proposed vision for rebuilding the area.

Outside, protesters bristled at the notion the that plan comes with request for a $535 million tax subsidy known as a TIF, or tax increment finance deal.

GRAHAM: Particularly since the project was deemed exempt from the city’s Inclusionary housing laws, which is why people assembled in the heat, far removed from the festivities, demanded Sagamore increase the number of affordable units in the project, and lower the income requirements to qualify.

CHARLIE CARTER: We’re out here today supporting our partners at HON, Housing Our Neighbors, to call on Sagamore development, our city leaders, to make sure that there is inclusionary, affordable housing in the Port Covington development. Right now there is a goal for them to try to reach ten percent. That is woefully inadequate when you’re looking at the amount of taxpayer subsidy that they are looking for for this project.

GRAHAM: But the conflict did not remain outside forever.

Just as Weller began his speech, protesters disrupted the event. They made their demands clear as a stunned audience sat silent.

Eventually activists were escorted from the room without incident, and the proceedings continued.

GRAHAM: We asked Sagamore development for comment, but we have yet to hear back.

For now, protesters say they are both saddened and disturbed that a city asking taxpayers to fund the largest tax break in history has done little to help the residents who will ultimately pay for it.

SPEAKER: Working-class people and low-income people deserve, if they’re footing the bill for this, to live in the posh city-within-a-city that Sagamore wants to build.

GRAHAM: This is Taya Graham and Stephen Janis reporting for the Real News Network in Baltimore City, Maryland.