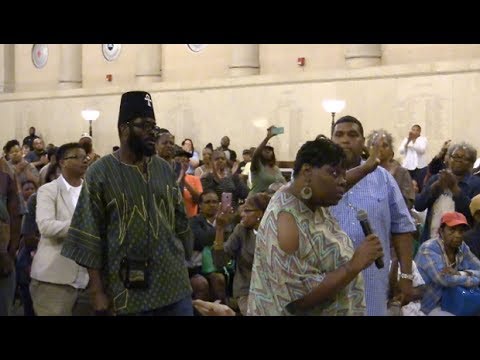 Taya Graham: This is Taya Graham reporting for the Real News in Baltimore City Maryland.

City residents are outraged over a new bus system that they say is broken.

The Real News was there two years ago when Maryland Republican governor Larry Hogan promised to fix the city’s broken bus system shortly after he scrapped plans for a new light rail.

Taya Graham: Inadequate mass transit has been an ongoing issue in Baltimore. Many say paltry investment and inconsistent buses only exacerbate the city’s stifling poverty. But the anger over this generational lack of investment boiled over at the city’s war memorial as rioters blasted the sole MTA official who attended and said the system is worse now than ever.

Speaker 3: Yesterday all I wanted to do was go to the grocery store and buy some groceries. I can’t stand outside for an hour and 16 minutes. Every time I called MTA nobody can tell me where the bus was at. Okay, you create this thing, people used to take one bus. People used to take just one bus to go to work or one bus to go to the grocery store and one bus to do their entertainment. Now they gotta catch two and three buses to go to education

Speaker 4: I feel that because of all of the bus routes that was taken from in front of senior’s centers, our seniors should not have to live sedentary lives. That bus route is something that they enjoy. When they’re 75 and 80 years old they deserve to deal with a bus and ride in peace. That might be the last bus ride they take. So let them have that.

Speaker 5: The way the news media is telling us that the crime rates high. We gotta walk three or four blocks where you used to walk only one. Crime rate is high and you’re taking away our stop. And another thing I’m upset with the governor because he changed everything. Let me tell you something else this second. He had the same cancers that I have. The only time he was sick, I’m a cancer patient just like anyone. Why would he change the thing so Mercy Hospital to make me walk all the way there without a bus? Where’s the compassion? When you have cancer, death is riding around your bed just like a merry-go-round. Many didn’t make it from cancer but me and him was one of the one who did. When you get up from cancer you’re going to turn everything around and confuse them on people? What?

Speaker 6: My question is, governor Hogan, whenever you give him this message, is he gonna pay my bills when I’m lying because I’m lost [inaudible 00:03:44]. Because I can’t get the bus on time. He gonna make sure that I got everything I need, every bit of availability, everything I deserve to have. [inaudible 00:03:58] It don’t make no sense, I gotta get up a whole two hours earlier. Two hours if I gotta log in at seven, I was getting up at six, now I gotta get up at 4:30 in the morning just to get to work on time. The bus is still not on time. And they have attitude.

Speaker 7: I think this bus system not working. Every time I’m waiting for a bus, it don’t come on time and I be late for work all the time. The old system was better because they had quick buses and everything. Now they don’t have quick buses so a lot of people be late and then the service not even coming on time. I be late all the time for work. I be waiting after nine or 10 o’clock the buses went every hour. It don’t make no sense.

Speaker 8: I think the old bus routes was better because some buses used to go to our schools and drop us off in front of it now we probably gotta walk a mile to get to our school now and it’s not good ’cause a lot of children really don’t know where they’re going. It’s gonna be complicated and I think it’s gonna cause frustration towards the community, towards the people who caused the system. If they continually get to school late, they gotta go to court and eventually they can get locked up if the child don’t go to school and the student can get put out.