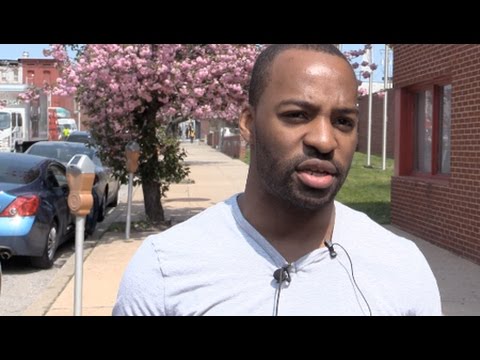 I’m standing outside the Baltimore City Correctional Centre, where we’re waiting for the release of Ivan Potts, a young man who lost 583 days of his life to our prison system. But the City State’s Attorney dismissed the charges. Why? Because he was arrested by three of the Baltimore 7, officers investigated by the FBI, and charged with overtime fraud, racketeering, as well as theft from the citizens of Baltimore. We’re going to speak with Ivan, his family, and his attorney, Todd Oppenheim.

IVAN POTTS: I was just set up, I was racially profiled by the officers, and I guess they was trying to say I was in a high crime area, whatever. But I was just walking to the store, and they just jumped out on me, and one thing led to another.

STEPHEN JANIS: And how did you feel when you heard about the officers in the indictment and what was going on, what did you think?

STEPHEN JANIS: What has this done to your life, in terms of having…?

IVAN POTTS: I mean, I lost everything; I lost everything I’d worked for, I lost. So, it’s just like I’m starting fresh all over again, but I’m free. So, I’ve got the opportunity to do everything I needed to do. And I’m… pursue my music, invest in my ideas and stuff like that. So, I’m just happy to be free.

TAYA GRAHAM: What do you plan to do now?

STEPHEN JANIS: What do you think about the justice system now that you’ve experienced this? How do you feel about it? Can people trust it?

IVAN POTTS: No. Me, personally, I believe the justice system in Baltimore is just… it doesn’t operate right. But thanks to my attorney, and everybody that supported me, things are operating right. Well, yesterday I was supposed to be released, and for some reason the system was broke again, and I didn’t get released. So, I’m just hoping we could do some type of reform to Baltimore City, period. Because the government in Baltimore City just let a lot of people down, I think they’re just corrupt.

And, you know, it’s not a good feeling to be in a position where, as though you on the other side of the law, and you’ve been incarcerated for something you didn’t do. So, I just feel as though their day come in court, just like my day came in court, and everything should be settled in court.

TAYA GRAHAM: You have a daughter you’re going back to?

IVAN POTTS: Yeah, a five year old daughter. Yeah, I can’t wait to see my baby girl. I finally get to spend time with her. And I lost a lot of time out of my daughters life so, I just want to be with my family, and help people in the situation that I’m in.

STEPHEN JANIS: You seem pretty happy, but do you feel bitter or angry at all about what was done to you?

STEPHEN JANIS: So, you forgive them?

IVAN POTTS: Yeah, I forgive them. I mean, they just fell victim to corruption. Nobody’s perfect. I hope justice prevails, you know, but I’m not bitter at all.

STEPHEN JANIS: Why is this case significant, in terms of the indictment of the seven officers, and some of the implications it has for a lot of the cases that are now being processed from this particular indictment?

TODD OPPENHEIM: Well, it’s really important, in terms of reforming police in the city, and throughout the country. Essentially the state prosecutor’s office is conceding that the testimony offered in this case — which was based on three officers who are now indicted — was suspect. And they’re conceding that the case should be reversed, and has to be in a position where Mr. Potts has to be released. And I think it’s really important, because it kind of recognizes the injustice that was done to him.

STEPHEN JANIS: Well, now he has always claimed his innocence, correct? ‘Cause you actually prepared for a jury trial, so talk a little bit about that.

TODD OPPENHEIM: Yeah, we went through the whole process of having a trial. It was done in front of a jury, and so the witnesses for the state were the three officers who were of the indicted seven. And then we had one of Mr. Potts’s friends testify for us.

We also called a police officer, ourselves, who was not part of the unit, who was part of the transport team, because Mr. Potts was injured in the course of his arrest. And there were, kind of disputed facts surrounding that situation.

STEPHEN JANIS: There’s been a lot of controversy about getting access to disciplinary records of officers while you’re prosecuting these cases, because of credibility issues. But, that’s still, the courts don’t really want to release that.

Should there be more transparency in these trials for officers’ disciplinary records?

TODD OPPENHEIM: Yeah, absolutely. I think it’s a multi-layered kind of process here that has created the misconduct that we’ve seen in the indictments. On the ground level, it’s the officers themselves that got in trouble, that are doing bad things that are violating the public trust. But then you have a system that kind of sponsors it. So, you know, once the cases come into court, we want to dig at this stuff. We hear about it from our clients, we hear about it from the community.

But there’s a certain level, kind of a superficial kind of created level, that the court system wants, as kind of an offering to show that we have something, where we can at least get to questioning them. So, sometimes the state reveals that a little bit, and then we have to argue back and forth. But, we’re dealing with city lawyers who come in to protect the police. And then we’re dealing with judges who make it really difficult to kind of get at those questions at trial.

So, with this case, it kind of shows that the state is recognizing their errors in that way, and then we’re also seeing some other officers who, where judges are kind of opening up the door to allowing some of the questioning. But, again, those are situations where the state is kind of giving us, you know, a carrot and we’ve done further exploration. But it’s still difficult for the average case, where we have a suspicion that there’s something going on with that officer.

STEPHEN JANIS: And, lastly, you know, they weren’t in any hurry to release him. You had to go through a little, sort of, iterations to get him out of jail. What happened?

TODD OPPENHEIM: Yeah, the injustices are typically not just as basic as you think. Yeah, there was an issue with the police officers that really was the part of the court case that got it overturned. But then just getting someone released, it’s kind of eye opening to see how dysfunctional and sluggish the system can be. Mr. Potts should have been released from court. There was absolutely nothing holding him, the charges were dismissed.

This is upper level kind of thing coming from the State’s attorney’s office. We knew about it for weeks, and we had an agreement. The court system was on notice as to what took place, and I tried to do a direct release from court, which is, really in the city, unheard of at this point.

There was one time when people were being released from courthouses, but now they typically take people back to the institution that they’re being housed in. The institutions claim that they want to verify that there’s nothing else holding them. But if you think about it, Mr. Potts was in jail for 589 days.

So, obviously he’s not committing crimes for the last two years, because he’s been in jail the entire time. And they had the ability, and the notice, to kind of verify whether he had an outstanding detainer in the time period. We told them about a week before, they could have done that. There’s no real mechanisms for the corrections officers in the courthouse to be doing the verifying.

So, you’re literally sitting there waiting on fax machines, and workers in the Department of Corrections, to match things up. So, they thought that my client had an extra case out there that was going to hold him in jail, which, really turned out to be not his warrant. And they couldn’t even figure out that it was a person 20 years his senior.

STEPHEN JANIS: He was innocent, according to the court system, there seems to be no sense of priority saying, “This man was innocent. He spent two years in jail.” Or, no sense that they did his guy wrong. And why is that?

TODD OPPENHEIM: Because the system doesn’t care. And they’re not going to treat him any differently because, you know, this injustice was exposed in the courtroom. He’s just a number, you know, another person that’s in the system.