Teressa Ghilarducci: The "chained" CPI ignores research that shows senior's costs are going up as they get older and women are most affected

Teressa Ghilarducci: The "chained" CPI ignores research that shows senior's costs are going up as they get older and women are most affected 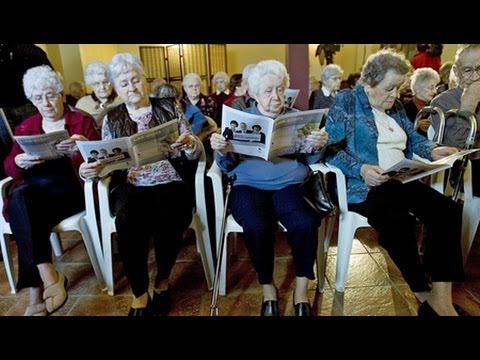 In President Obama’s new budget, there’s a proposal to change the way the consumer price index is looked at in terms of Social Security. This is a reform that’s supposed to, in the long run, save Social Security some money. It’s called a chained CPI. Some people are calling it a cat food CPI.

Now joining us to talk about why they’re saying this is Teresa Ghilarducci. She’s a labor economist and a nationally recognized expert in retirement security. She taught economics at the University of Notre Dame for 25 years. She’s currently director of the Schwartz Center for Economic Policy Analysis at the New School for Social Research. Most recent book is When I’m 64: The Plot against Pensions and the Plan to Save Them.

Thanks for joining us again, Teresa.

JAY: So why–people are cracking this joke about it’s the cat food CPI. But why are they saying it and what do you think of this whole idea?

So I’ll talk about the first part of this story. Chained CPI really is just a way to measure inflation so that it looks lower than the current consumer price index, or CPI. So the chained CPI is a technical adjustment to CPI based on the theory that people move away from expensive goods and can seamlessly and costlessly switch to cheaper goods. And that’s happening all the time. So the real inflation that people are really suffering is a little bit less because they’ve already switched out to cheaper products.

But that is a big if. It really assumes that people are making those switches all the time and can do it without cost. To assume that older people are doing that is just plain wrong in face of what we know about the way older people spend money. And, in fact, a lot of us think that we should technically adjust the CPI used for Social Security with something called the CPIE, or the consumer price index for elderly people, because we know that elderly people face higher inflation than the rest of us. And that’s because elderly people have less choice, have less mobility, and actually buy a lot of health care and a lot of services that are going up in price faster than the kinds of things that younger people buy. Just the facts show that the fixed–.

JAY: So it’s the exact opposite of what they’re saying.

GHILARDUCCI: Exactly the opposite. If President Obama wanted to technically fix the index to make it more accurate, he would have picked the CPIE, not a chained CPI. I know that sounds like a lot of geek talk, but this matters for the bottom line.

What President Obama has proposed will cut benefits for the most vulnerable elderly, because as you grow older, this cut in [incompr.] increases to adjust for inflation adds up, so that when you’re over 90, the cut has accumulated up to something like $22,000 for your lifetime or another almost 20 percent of your benefit. So you are penalized for living longer, because your Social Security buying power will be a lot less.

It just goes–this proposal just flies in the face of what we need in this country, and it’s really oriented towards the short-term budget numbers rather than any real on-the-ground ways to make sure older people, especially in their 80s and 90s, aren’t really living on cat food.

JAY: So just to be clear on what this is and why people are calling it the cat food reform is ’cause they’re–the Obama administration is saying what’s really happening, even though the consumer price index may go up a certain amount, is that elderly people are buying cheaper and cheaper stuff, and so that’s what should be reflected. But it’s kind of crazy, ’cause it’s putting elderly people in a position where they have to, for example, eat cheaper food or take a bus and not drive, even though they might not be able to comfortably get on the bus. And as you say, it doesn’t take into account, especially on the medical side, the amount of copays and medical costs that elderly people get into are crazy.

But what I also wanted to emphasize: this cut adds up, and every year you live into your old age, the worse the cuts are. So it’s in some ways a heartless way to cut Social Security benefits, because it hurts older people the most. It adds up.

And I’m not saying this just because I’m a woman: as the population gets older and older, women live longer than men, and so when you get to populations in their 80s and their 90s, you’re finding more and more women. So this cut disproportionately hurts the oldest women among us. It’s probably an unintended consequence. He probably didn’t mean to go after older women. But that’s the practical effect of this proposal. It’s stunning that it’s coming from a Democratic president. But even if it came from the moon, it’s very bad policy.

JAY: Alright. Thanks very much for joining us, Teresa.

Thanks very much for joining us on The Real News Network.

Teresa Ghilarducci is a labor economist and nationally-recognized expert in retirement security. She taught economics at the University of Notre Dame for 25 years and is currently the director of the Schwartz Center for Economic Policy Analysis at the New School for Social Research. Her most recent book is When I’m Sixty Four: The Plot…