The Debate: A Sorry Affair

Tom Ferguson: Neither candidate presented a vision that will solve the crisis

Tom Ferguson: Neither candidate presented a vision that will solve the crisis 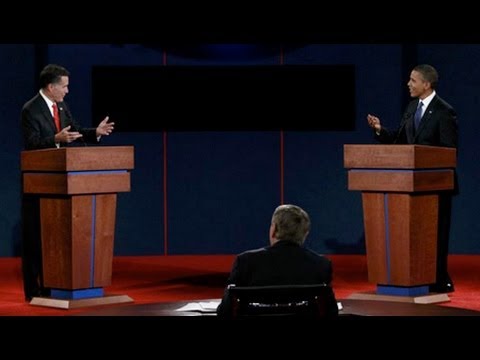 Last night, President Obama and candidate Romney faced off in the first presidential debate. And now joining us to give his view of what happened is Tom Ferguson. Tom’s a professor of political science at the University of Massachusetts Boston. He’s a senior fellow at the Roosevelt Institute and often contributor to The Real News Network. Thanks for joining us, Tom.

JAY: So what did you make of it?

FERGUSON: Okay, well, I’ll tell you. The first thing, remember, I’m a teacher, and frankly, I think these guys have some nerve talking so cavalierly about teachers when right from the start it was like a terrible exposition on both sides. They wereâ€”people were getting lost in fogs of detail, they were begging questions, they were talking past each other. You know, if any teacher gave a performance like that, they probably would lose their job, even, I dare say, in a union-protected environment. So in that sense, boy, I was underwhelmed by all of this.

Now, then I’d say, well, alright, you know, Romney wasn’t wooden. That’s a plus for Romney. I suspect that some of the people that lookâ€”have heard him just keep talking jobs, jobs, jobs might think that that will somehow make his numbers add up, you know, and that might be another little bit of plus.

But on the other hand, there was a short exchange, but one I suspect that did hit home, where Obama sort of called attention to the fact that that voucher program will hit people in their fifties right now, the voucher program for Medicare that Romney conceivably could put in. And, you know, if you notice, in the polls Romney was actually doing rather well at the start of the race with people who are relatively old, and that number of people approving him has gone steadily down. I rather doubt that that exchange is going to do anything to bring it back.

So, you know, my honest take on thisâ€”I mean, people are saying, well, Romney looked better. Well, look and let’s see. My take is is that this is sort of a draw at a sort of serious policy level. I thought it was pretty bad all the way round, and I’d say, you know, they sort of had a drawâ€”America lost.

But my other deep takeaway here is that they all spent so much time talking about the magic of the marketplace, the genius of the American people and stuff, that virtually none of the points at issue between them could get any kind of real development. You know, Obama basically feels obliged every seven minutes to say something wonderful about free enterprise, even when he’s correctly observing, you know, that the insurance markets don’t work. And no amount of rhetoric or assurances from Romney, you know, that competitive insurance markets will somehow make things betterâ€”you know, they haven’t after 50 years. You know, the president was, of course, correct: you can’t reallyâ€”and maybe Mitt Romney can buy insurance for his kids till age 26, but the rest of us certainly could not afford that untilâ€”.

JAY: Now, I thought there was quite aâ€”a point where Romney scoredâ€”I mean, I thought there were several times Romney scored a few direct hits, one of which is after President Obama mentions the Cleveland clinic as an example of efficiencies in the hospital, and then Romney says, well, that just proves my point, how these private enterprises can be successful more than government. And Obama simply doesn’t fight back on this. And it goes back to Obama from the very beginning of his administration. He wouldn’t consider a publicly funded jobs program. It always had to be tax breaks or some kind of stimulus for the private sector.

FERGUSON: I don’t disagree with this, Paul. I mean, this is sort of one of these the best lack all conviction, while the worst, you know, just break apart. This is a really bad situation. I’m notâ€”but my take is, as a debate it was pretty bad.

But I’ll bet that not that many votes change. I may be wrong. I remember 1980 when I think it was the last debate there between Carter and Reagan, and a lot of folksâ€”everybody I knew, actually (I’ll tell the truth; I was then teaching at MIT), thought, well, Carter really cleaned Reagan’s clock, and, you know, the rest of the United States thought differently. I think I’ve learned to calibrate my impressions better since then. But my bet is there won’t be that many vote changes as a result about this, and, you know, anybody can predict they’ll follow sort of male-female lines. That doesn’t takeâ€”it’s not exactly an [crosstalk]

JAY: Well, the thing I don’t understand, but I haven’t understood this from during the last four years, is that President Obama should have been able to bury the Republican Party after eight years of the Bush administration, the illegal and failed war, and on and on and on in terms of constitutionalâ€”violations of people’s constitutional rights, the economy, the debacle of 2008. But he never wants to critique the Bush administration. It’sâ€”you know, he only wants to look forwardâ€”let’s not look backwards. And he’s continuing that now. And it seems like, you know, he sees himself as chairman of the board of the American elite, all of the American elite. I mean, he says all the American people, but it’s all the American elite. And he doesn’t want to have a fight with the Republicans.

FERGUSON: Look, this was effectively a debate tonight between, if you like, two wings of a corporate boardroom.

JAY: Boredom and boardroomâ€”I think both are right.

FERGUSON: Yeah. Or if you want to vary the metaphor, battle between the country club and the boardroom, and that’s about all. This was a pretty shabby show. I’m not disagreeing.

JAY: Thanks very much for joining us, Tom.