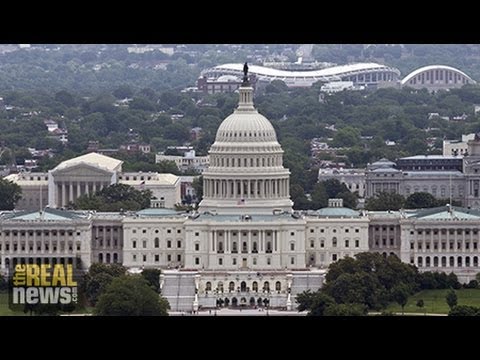 Bush and Cheney may have invented it, but national Democratic Party leaders are full-fledged players in the 21st-century national surveillance state. And the interest-group pressures that now help to sustain its defenders in Washington work just as powerfully on Democrats as on Republicans. That’s according to Thomas Ferguson, Paul Jorgensen, and Jie Chen. They have just posted a short version of their new report on AlterNet and a working paper for the Roosevelt Institute titled Party Competition and Industrial Structures in the 2012 Elections: Who’s Really Driving the Taxi to the Dark Side?

We’re now joined by one of the authors, Thomas Ferguson. He’s a professor of political science at the University of Massachusetts Boston, a senior fellow at the Roosevelt Institute, and a contributing editor at AlterNet.

NOOR: So, Professor Ferguson, what you’re arguing here kind of flies in the face of conventional wisdom and the mainstream narrative of the 2012 election. Can you just break down exactly what you’re saying?

FERGUSON: Okay. Well, we’re saying a lot of things, but I’ll focus on the stuff that connects directly to the national surveillance state. We started out trying simply to do a straightforward money-in-politics analysis of the election. Now, I say that fully conscious of the irony, ’cause there’s nothing straightforward about that.

We don’t use anybody else’s data. We download it all from the Federal Election Commission and the IRS, which does the so-called 527 contributions, which are big–it’s a lot of money. And then we sort of pore over it and we do a lot of computer techniques that nobody else does. I mean, I’ve talked about that before on this show–don’t particularly feel the need to do it again.

And so we were sitting back and, you know, analyzing it. And our first stages of the study are pretty much the same. You sort of sit there and you try to figure out, okay, let’s take the entire business community, then let’s subdivide it into big business and the rest and look at those two samples, one everything and the other big business. So we do that.

And in the business as a whole, the big sample, what we discover is straightforward, which is that Obama’s support there was not very strong. Just counting percentages of firms that contribute, about 24 percent did. The Republican percentage for Romney was, like, 46 percent–much higher.

And when we look at the big business sample, we find, you know, again a disproportion between the Republicans and the Democrats, though this time everything shifted up. That is to say, 76 percent of the big business firms on our sample were contributing to Romney and about 56 for Obama. Now, you know, what that looked like to us was the usual story, which is, yep, the Republicans are the party of big business, though we thought it was really pretty interesting. And this is one place where we start to depart from the usual narrative. Obama had a lot of support in big business, much more than any discussion of the campaign that I know of would suggest.

But where the story got really interesting for us is when we did our usual move, which was start looking at pieces of the business community, usually sectors first. And there we quickly discover that in certain industries Obama’s support is running way higher than his average. And those industries turn out to be six in particular: telecommunications, electronics, defense, software on the web, computers, and manufacturing for the web.

In June 2013, when the Snowden revelations hit, you know, from Glen Greenwald and company at The Guardian, and to some extent The Washington Post, we were looking at these results and said, you know, this is really very interesting. These sectors that are showing extremely high percentages of contribution to Obama are precisely the sectors in which a large number of those firms that are mentioned are real active. And at that point, you know, we know we have a really interesting conclusion, which is that a lot of the Obama bastions of support, maybe the biggest of all, is precisely those firms, the ones responsible for the surveillance–I should say, sectors in which those firms predominate. On the other hand, I can also tell you, without trying to go firm-by-firm, a lot of the folks discussed in The Guardian and other publications, Google, Facebook, Apple, for example, they all contain substantial contributions or contributors, ’cause you can have both the firm and executives contribute under our rules these days. They show up for the Democrats in substantial amounts.

NOOR: And as you point out, many Obama supporters were hoping that President Obama would rein in, you know, what could have been seen as rampant surveillance and, you know, wiretapping under the Bush-Cheney years. So what needs to be done to bring these companies, to bring these industries under heel and under some type of control?

FERGUSON: We know from Tim Shorrock’s really excellent book on this subject that steadily forward from the Reagan era, the government privatized more and more of intelligence operations. And, you know, the Clinton people were very big in that. But then the sort of big change is after 911. The whole sort of newly privatized operation then swells enormously in size. And so we’re to the point where now, say, like, two-thirds of all the intelligence expenditures, Shorrock estimates, are going to the private sector.

And, you know, I have to say, looking back on this now, this looks to me like an awful lot of other privatization efforts I’ve seen, where it turns out you get clientele politics. And certainly you get some very powerful interest group pressures. If you look at–I mean, there is a couple of studies–there’s at least one study of the amendment that almost passed in the House of Representatives not long after the initial revelations to rein in the NSA, and there they showed you that there was–the correlation between districts with a lot of defense and what they were calling surveillance industry money, which is probably narrower than what I am, it was very high. And it’s–that’s pretty interesting and it’s pretty scary.

But, you know, my take is the actual sort of, if you like, industrial interests here are now very deep, very big. And what looked like a problem of ideology, meaning what top policymakers or bureaucrats thought was legally or morally acceptable, is that’s just the tip of the iceberg. You now have a huge interest group problem here.

And, you know, that, I think, poses the question of controlled completely anew. I mean, it seems pretty obvious to me, looking now again at all of this with somewhat, you know, keener eyes, that it’s obvious that when Obama came in, yes, as you said, we all expected that he would rein in the sort of super extended national surveillance state from the Bush-Cheney era; instead what he did is fix a few of the most grievous errors, but then, you know, we know he was in fact secretly expanding what was going on underneath in surveillance. The government was even offering to pay some of the costs of firms when they had to change their equipment, you know, which of course makes nonsense of their denials they knew nothing about it. And we actually have here, I’d say–it’s pretty scary, right? I mean, you’ve got a government that wants to collect nearly everything about you, working through firms that also like that idea. And, in fact, what they’d like to do is to, you know, sell the information there. This is kind of a closed loop.

This is–you know, I wouldn’t have said this was the major problem. You know, I was of course, like a lot of other people, naive.

NOOR: So, Thomas Ferguson, we certainly have a lot more to talk about, but we’re going to end this part of the conversation here. Thank you so much for joining us.