Is Kiev Underestimating the Death Toll in the East of Ukraine?

Tarik Cyril Amar, Assistant Professor at Columbia University, says Kiev has polarized civilians who might have been neutral before being shelled and caught in a humanitarian crisis induced by their government

Tarik Cyril Amar, Assistant Professor at Columbia University, says Kiev has polarized civilians who might have been neutral before being shelled and caught in a humanitarian crisis induced by their government 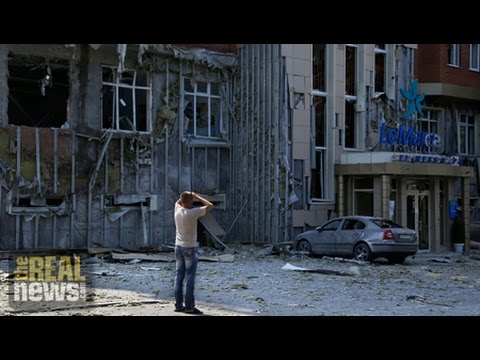 Thank you so much for joining us today, Tarik.

PERIES: So, Tarik, in our earlier segment we discussed whether the peace agreement negotiated in Minsk is going to take hold and the difficulties that it may be having at the moment. And in this segment I’d like to take up the humanitarian situation, the humanitarian crisis that this conflict has generated.

Now, one thing that I want to begin with is that just before Angela Merkel arrived in Washington last week–this was prior to the Minsk agreement–to discuss the situation in Ukraine, the German intelligence services leaked some information in relation to the death tolls. Now, there’s a discrepancy between the official statistics being released by the United Nations being at somewhere around 5,500 and what the German intelligence leaked last week, saying that it might be up to 50,000. So what are the real numbers here and the number of people that have died from this conflict so far?

AMAR: I would not be in a position to guess, but I have to say that it seems very plausible to me, and it also seems plausible to a number of experts I sometimes talk to and whom I’ve asked about this. What seems plausible to me is that the United Nations figure is an underestimate, and probably a severe underestimate. Whether the German intelligence figure is close to the truth I couldn’t tell, but it is simply not very believable that this conflict has been going on for quite a long time by now, and it has gone through several rounds of escalation.

And at the same time we still have a very low number of casualties, and also a very low, a very slow increase of casualties. Of course, one could only be happy if the casualty numbers were as low. I mean, one person is actually already too many. But I think, unfortunately, it is safer to assume that the casualty number is significantly higher than what we get from the UN, and also what we get from the government in Kiev.

PERIES: Tarik, what’s the interest of underestimating the number of people killed?

So Kiev has an interest, as has happens in war, of pretending that this is less horrible than it actually is. That’s one part of the story. The other one is Kiev has also been using fairly indiscriminate fighting methods, especially around cities in the East, around Donetsk and Luhansk, when the troops were still close to it. They’re not now. And Kiev may very well also have an interest in not stressing the fact that more civilians may have died from its own shelling than it would like to admit.

PERIES: Now, speaking of civilians, their conditions are getting dire and the numbers are growing bigger in terms of the number of people displaced from this war. It said 1.5 million or so. What are the conditions for them that you’re hearing? And last reports I saw, there was no water, there was no basic food supplies, and to–also clothing to survive in this wintry conditions there. Do you have any information about that?

I have seen different figures for the number of displaced people, around a million at least everybody seems to agree on at this point, around a million. I have seen 920,000. I’ve seen it a little higher. But this is by any means already a very severe humanitarian crisis.

The fate of those who remain in place, as you have described, is very much shaped by the breakdown of infrastructure, and it’s also shaped by the fact that Kiev has quite deliberately cut these regions off from certain types of supply, from pensions, payments, from certain types of wages, of course. It has partly cut off the use of banks and so on and so on. So there is actually a siege practice that Kiev is applying to these territories, arguing that if they are under rebel control, the central government has no further business actually maintaining them.

Now, this may to an extent be understandable, but what it is of course doing–and we hear this more and more–it is severely alienating the local population in the East. So Kiev is applying policies, I think, that are now polarizing people who were actually at the beginning of this conflict probably quite neutral. And they are getting reports that being shelled by Kiev, being put into very severe humanitarian distress by the Kiev government, plus, of course, the influence of Russian TV, which is being watched there, is leading to the fact that the population is actually getting even more antagonistic towards the central government. So that’s quite a counterproductive outcome.

The other thing talking about the displaced persons, they will get very different reports, you have to see that displacement operates in different directions and different distances. Some people are displaced, but they don’t go very far. They just go to the place that is close but no longer, for instance, under rebel control, but under central government control.

Some people go quite far, for instance, to Western Ukraine. They entirely leave the East or to Central Ukraine. And, of course, there are those who get displaced into Russia, too. And we know that the efforts to address the needs of these displaced people–they of course lose their livelihood, they lose their jobs. They are often traumatized psychologically. But we also know that these efforts are–they are certainly not insignificant, but as you might imagine under the circumstances, they’re also very incomplete and imperfect, and there are even tensions, unfortunately, among displaced or refugees who end up in different parts of Ukraine and the local populations there. So the whole issue of the displaced populations, the displaced persons, is another major stress on the Ukrainian government.

PERIES: And also on the Russian side, some of these displaced people have actually fled to camps in Russia as well?

AMAR: We know that some people have fled to Russia, but the issue is not playing a large role. You have to consider that in Russia the media are very much controlled by the state, and in a very heavy-handed way. So you would not see that the Russian government would be put under public scrutiny or pressure because of the fate of displaced persons. That’s not happening.

PERIES: Right. Tarik, I want to thank you so much for joining us and describing to us what’s happening in Ukraine. And I hope to come back to you very soon for another update.

AMAR: Thank you very much.

Tarik Cyril Amar is a historian of the 20th century, specializing in the history of Ukraine, Russia, and the Soviet Union. He is an associate professor in the department of history at Koç University, and was previously an assistant professor of history at Columbia University. He received his BA from Oxford University, MSc from London…

United States and Turkey Agree to a Syrian “Safe Zone,” Betraying the Kurds