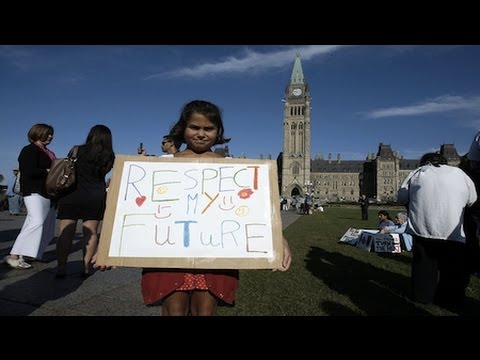 MALAK BEHROUZNAMI, TRNN: Approximately 180 people were arrested at a tar sands protest as they climbed over a barrier that had been set up by the police. This is Malak Behrouznami for The Real News Network. In Ottawa, Ontario, on September 26, individuals and members from organizations including Greenpeace, Tar Sand Action, and Indigenous Environmental Network gathered in front of Parliament Hill to risk arrest in an act of civil disobedience, to show Prime Minister Harper their opposition to the proposed 1,700 mile keystone pipeline that is to carry tar sand oil from Canada to the Gulf of Mexico. Activists in both DC and Ottawa have been voicing their concerns to their respective governments to stop the project.

DAVE COLES, PRESIDENT, CEP UNION OF CANADA: There is no sense to this approach. Our prime minister says we need to be the fuel tank of America. How the hell do you de-link jobs, the environment, the economy, First Nations rights? You can’t. It’s all one package, and you can’t put it in a pipe and ship it to Texas.

MELINA LABOUCAN-MASSIMO, CLIMATE & ENERGY CAMPAIGNER, GREENPEACE: The time is now to put people before profit. This behind me is the House of Commons, not the house of corporations. The government should represent and protect the people. Instead, what we see is communities being sacrificed for the profit of few.

BEHROUZNAMI: Individuals gathered at a rally where speakers like Maude Barlow, Chief Jackie Thomas, and Tony Clarke voiced their concerns over the tar sand industry.

MAUDE BARLOW, NATIONAL CHAIRPERSON, COUNCIL OF CANADIANS: It is very clear that it is the energy industry, the energy companies, that are driving policy in this country and not the other way around.

BEHROUZNAMI: One of the main objections to the expansion of the tar sands is the fact that the development of tar sand oil is a labor and capital intensive process. Unlike regular oil, tar sand oil is solid and carbon-based. To refine the oil, the carbon must either be removed or have hydrogen added to it. This process has taken a toll on the environment and nearby communities.

ERASMUS: To make one barrel of oil, it takes four to five barrels of water. There are tailings ponds that total 700 square miles of toxic waste. That waste goes into the water system. We are downstream. We feel it.

LABOUCAN-MASSIMO: Where I come from, billions of dollars have been taken out of our traditional territory. And yet, till this day, my family goes without no running water. We see abject poverty in the richest province in the country, First Nation communities living in Third World conditions in a First World country. We see aboriginal treaty rights being violated daily.

BEHROUZNAMI: Individuals like Ben Powlis of the Indigenous Environmental Network and Melina Laboucan-Massima from Greenpeace are in disagreement with the Harper government’s management of resources.

BEN POWLES, INDIGENOUS ENVIRONMENTAL NETWORK: The main reason that, you know, Canada is backing the tar sands so much is that they see it as, you know, the real economic driver. But it’s an interesting thing, because under this neoliberal model that this Harper government is implementing, you know, Canada doesn’t even gain that much from the exploitation of the tar sands. Harper government is subsidizing oil companies, the most profitable companies on the planet, to the tune of about $1.4 billion a year at the same time that they’re cutting spending to a lot of social programs, a lot of programs for aboriginal people, programs that are designed to counter poverty, and women’s issues. You know, it’s really inexplicable.

LABOUCAN-MASSIMO: The infrastructure’s already in place for these corporations and, you know, this type of fossil fuel development. And because this infrastructure in place is–they’re trying to keep it in place–you know, basically, instead of decentralizing, you know, power, which would be renewable energy systems or systems that would actually empower communities to, you know, power themselves, you know, have solar, hot water, we’d have a lot of different, you know, energy initiatives that would actually benefit communities and actually keep communities healthier and more sustainable. But because we’re–what the Harper government’s trying to do right now is basically lock us into a fossil-fuel based economy.

BEHROUZNAMI: George Poitras attended today because people’s health in his community and surrounding areas is being put at risk with the development of the tar sands.

GEORGE POITRAS, FMR. CHIEF, MIKISEW CREE FIRST NATION: About a year and a half ago, I attended the Alberta Cancer Hospital, where our youngest victim, 27 years old, was diagnosed one month, and two months later he was dead. This government, in 2006, when our local physician, Dr. John O’Connor–many of you know him–actually lodged complaints against him, essentially laying charges against him for causing undue alarm because he was raising raising issues about observing these unusual cancers in my community, essentially saying to the community of Fort Chipewyan, they don’t care what Dr. O’Connor is claiming, they don’t care that there are people potentially living in a situation with an epidemic of cancers.

BEHROUZNAMI: The arrested individuals were charged with trespassing and released a few hours later.

BARLOW: On my opinion, those crossing the line today are not breaking the law. The people breaking the law is the Harper government in that building behind us. They’re breaking the Fisheries Act, which which says you cannot put poison into our lakes and rivers and groundwater. And they allow it to be rampantly put into the groundwater in Alberta, and now they’re going to export it around the world. They are violating the UN–the new recognition of the United Nations to the human right to safe water; they are violating that. And they are violating the right to free prior and informed consent of First Nations people as is understood in the United Nations Declaration on the Rights of Indigenous Peoples. Shame on them.

DEMONSTRATOR: Now, you guys get that tar sands cleaned up or we’re coming back. Alright?

BEHROUZNAMI: From September 26 to September 30, the US State Department will be holding comment hearings in those states who would be affected by the pipeline. The final hearing is to take place October 7 in Washington, DC, at the Ronald Reagan Building.