Bassam Haddad: Resignations of Ba'ath members not yet at senior levels, repression will continue

Bassam Haddad: Resignations of Ba'ath members not yet at senior levels, repression will continue 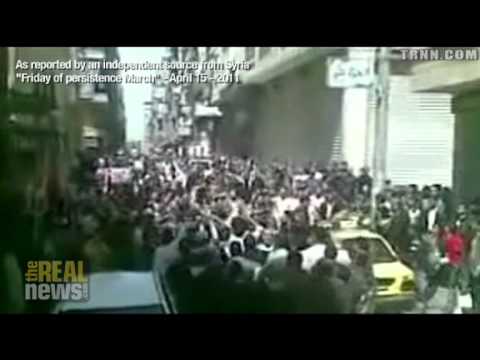 PAUL JAY, SENIOR EDITOR, TRNN: Welcome to The Real News Network. I’m Paul Jay in Washington. In Syria, the repression continues to intensify. In the town of Baniyas, the northern town in Syria, reports are [that] tanks are surrounding the town and 30 members of the ruling Ba’ath Party from Baniyas have resigned in protest of what they say is live fire on demonstrators. And this is just one of the cities that seems to be on fire–not literally, but in terms of intensity. Now joining us to talk about the current situation in Syria is Bassam Haddad. He’s director of the Middle East Studies Program at George Mason University. He’s on the editorial committee of Middle East Report. He’s cofounder of the Middle East web information site Jadaliyya.com. Thanks for joining us.

BASSAM HADDAD, MIDDLE EASTERN STUDIES PROGRAM GEORGE MASON UNIVERSITY: Thanks for having me.

JAY: So talk [snip] what’s been going on in the last few days, and let’s talk what [incompr.] what it all means.

HADDAD: You know, I think, as I have been discussing since last week, we are entering a different phase in the confrontation in Syria between the regime and the protesters, where the stakes are very high, and where the regime has begun to resort to tactics, coercive tactics that include tanks and much heavier gunfire, of course, live bullets. And that started on Friday, last Friday, which was called Great Friday by the protesters, also referring to the Christian Easter holiday that’s called Great Friday in Arabic. That began the escalation whereby the regime killed more than 100 people. Of course, that is the news from the protesters and [incompr.] media. The regime has another story. But even if one has to adjust for exaggerations here and there, the bloodshed on Friday has been unprecedented. After that, we saw the regime surround the city of Daraa in the south and cut off water, electricity, and [incompr.] coming in and out of Daraa, sending in tanks into the city, and basically arresting or detaining a lot of the supposed protesters.

HADDAD: I think you will find that in the coming days there will be much more resignations. These resignations refer to the portion of the Syrian society that is likely to respond to these killings and to the violence in this manner. However, as you go up in the Syrian hierarchy of power, you will find that these resignations will not exist. Most of these resignations will take place at the lower rank and file in the party bureaucracy and the army. Once you get to the regime itself and the security services and the top ranks in the army, it is very unlikely at this point to see serious splits, and if we do see them, they’re going to be minimal. There might be more serious splits as the level of violence by the regime becomes threatening to the regime itself. That’s when we might see schisms at the top.

JAY: Now, there were reports from WikiLeaks–The New York Times released some of this, and there’s been–Assad himself has been saying this, that there’s been a lot of outside influence, US financing the opposition. How do you parse out what might actually be from outside involvement from what’s more just indigenous domestic popular uprising?

HADDAD: Most of what we are seeing is domestic, the overwhelming majority. The external support exists in ways that are not material, with the exception of a couple of cases where there is support from the US for a television channel. But that is not something that’s going to change the game. There are other television channels that have nothing to do with external US support or external European support that are already doing the job. And they include, of course, Al Jazeera, but they also include Syrian satellite and television channels–or Syrian-owned–that have an interest in revealing what is happening. And usually, of course, you will find a lot of exaggeration here and there. I think the regime is focusing on the exaggeration and ignoring the core of the demands of the people and the core of the actual narrative, the reality. So you could focus on the excesses and the exaggerations, but that’s–by no means detracts from the fact that most of what’s being reported is not actually illegitimate. And it’s not a puzzle that a good number of Syrians and the majority of Syrians live under a repressive sort of rule.

JAY: President Assad–and to some extent you see some of this in the Western media, but Assad stands as sort of a bulwark between secularism and Islamic extremism, and of course he has been blaming a lot of the uprisings on Islamists. Take a town like Baniyas, which is now surrounded by tanks, and all these 30 resignations, apparently, from the Ba’ath Party. Is this some kind of [incompr.] of Islamism?

HADDAD: No, no, it’s not. I mean, the word Islamism, I mean, we need to break it down a little bit. And, I mean, it could include the word Islamists, or Islamism can include any number of groups, many of which have values and aspirations and principles that are shared by the majority of not just Syrians but people around the world. But also it resonates in the American mainstream public that, you know, [incompr.] the fear of the Islamists. And that, unfortunately, becomes a story and detached from or basically distracts us from the real story that’s taking place in Syria right now, which is the popular uprising against a regime that has been exclusionary. And recently, economically, the situation has been deteriorating for some time. The only positive aspect of the 40-some years of the Ba’athist rule, according to many, is the coming of Bashar Assad in 2000. But that also left a lot of people in despair, because they have not seen the promises unfold, the ones that he made in 2000.

JAY: Thanks very much for joining us, Bassam.