Organizing for the poor Pt.2 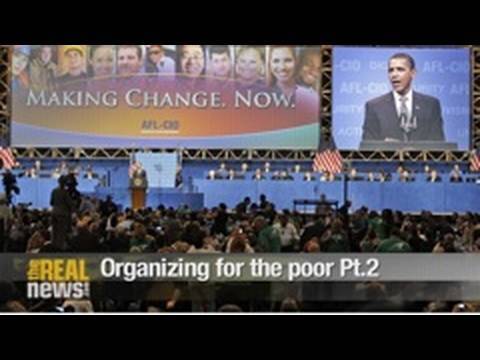 JAY: In the first segment we talked a bit about what’s happening about organizing amongst urban poor. Let’s talk a little more about the broader situation in the United States. You have a working class in the United States, certainly a section of which has done pretty well the last few years, pretty well relative to urban poor and not pretty well relative to themselves—we know there’s been pretty static wages since 1972. But there is a divide amongst people who could afford a house, a car, and maybe even a cottage, and people that are, you know, fighting to live on sometimes under $10,000 a year. Now those people who were having a relatively secure life are getting laid off. People in the auto industry in the thousands and the steel industry and some of the more elite industries are losing their jobs. What is the situation now in terms of people who are moving into this urban poor? And what is happening in terms of organizing? And I guess what I’m asking specifically—the role of trade unions. Are they playing much of a role in all of this?

WILLIAMS: It’s critical for us to break through the issues of stigma that we were talking about earlier, where folks don’t feel comfortable associating with working class as an identity. But I think that really the responsibility for building organization and combating much of that stigma really does fall on trade unions and community organizations. And at the last AFL convention that just took place in Pittsburgh, I think one of the most exciting developments was that the AFL [American Federation of Labor] is really beginning to investigate organizing informal workers, folks who have traditionally not been in trade union occupations. But then the AFL is also looking to establish relationships with community-based workers organizations that have been organizing those sectors for close to a decade now. And so I think it’s really—as you’re seeing, it’s the joining together of the traditional house of labor with what some people refer to as the shed of labor. As you’re seeing sort of formal and informal workers joining together, I think that it creates a real opportunity for developing a movement that’s able to articulate the demands and needs of working-class and low-income people in the United States.

JAY: A lot of people, especially in the African-American community, were extremely optimistic about President Obama. There were a lot of promises made. What’s your assessment so far?

WILLIAMS: I do think that there is a critical opportunity that the Obama administration is missing to put forward a very clear vision. I think that many of the African-Americans in power, and then black folks across the country, as well as other communities of color, folks are really wanting to hear, well, what could this country look like? Instead of starting the health-care debate from a compromise position, instead of talking about health care in terms of how is it that we can save money, we should be talking about how is it that we’ll best be able to provide health care for everybody who needs it, how is it that we can talk about restructuring the economy not to benefit the banks, but how is it that we can benefit all of the communities that have been disinvested and disenfranchised for so many years. And I think that there’s a critical opportunity that the Obama administration right now is missing. But I do think that much of the responsibility has to come back to the progressive movement, including trade unions and community-based organizations, and I think it’s critical that we engage in a higher level of organization, that we really begin looking at national formations that allow us to put the necessary pressure on the Obama administration so that they feel a counter-push against Fox News and the right-wing push that they’ve been subjected to for the last few weeks.

JAY: So, Steve, you are saying that President Obama and his administration are missing an opportunity to articulate this kind of a more progressive vision. But what indication do you have that they have such a vision?

WILLIAMS: Well, I don’t want to be naive about Barack Obama as a progressive, and I don’t even necessarily think that, you know, we can take all indications of what it is that he promised on the campaign trail. But I don’t think that it’s their intention to be slaughtered in the way that they are by the racist right at this point in time. I don’t think that it’s their intention to have their proposals—for example, for the public option in the health-care plan—to be thrown away in the dustbin of history in the way that it looks like it is happening right now. They need a push from the left. And at this point in time, they could play a role in facilitating some of that. But, again, I think that the central responsibility for the success and failure of progressive policies at this particular moment in history really falls on us in our capacity to be able to build a strong, vibrant, relevant progressive movement in the United States. I think that Barack Obama, his administration, there are particular forces in that administration that allow us, give us an opportunity to be able to apply strategic pressure, but there’s no way that they’re going to play the leadership role that I think folks in working-class communities, communities of color can and should play.

JAY: And how do you balance this issue of critiquing the Obama administration when you think it should be and the attacks on this administration from the racist right? Because the progressive community’s always been caught in this bind, especially at election time, that the racist right looks so much worse, you wind up supporting what amounts to a center, center-right Democratic Party administration.

WILLIAMS: The big challenge at this point in time is that the progressive movement has very little infrastructure. So if we were to have stronger infrastructure, a notion of an inside-outside strategy begins to make a lot more sense. At this point in time the progressive movement is able to do very little more than a rhetorical air fight. But I think that we need to really think seriously about our capacity to be able to put feet on the ground, to be able to move large numbers of people, to be able to demand an immediate withdrawal of forces from Iraq, Afghanistan. We have not taken up the charge of doing that. We should be mobilizing hundreds of thousands of people onto the streets to demand that financial re-regulation and a restructuring of the economy take place in a way that benefits [the] working class and communities of color. But you’re absolutely right: when we don’t have those folks on the ground putting forward those demands, then we are caught in a catch-22 situation, where the emergence of the right has put us in a situation where it’s difficult to be able to criticize, rightly criticize, the Obama administration without playing into the critiques that are coming from the racist right.

JAY: Alright. So in the next segment of our interview, let’s talk about why you don’t have hundreds of thousands of feet on the ground. Please join us on The Real News Network.

Steve Williams is co-director and co-founder of POWER. Steve cut his teeth as an organizer with the Philadelphia Union of the Homeless and the San Francisco Coalition on Homelessness, organizing welfare recipients and homeless people during a period of intense local attacks on lo-income people. He spearheads POWER’s movement building and leadership development work. In…