Even though Ross's memo contradicts his and DOJ testimony, Supreme Court says Sec Ross will not have to testify in the challenge to the 2020 census citizenship question, which threatens to undercount immigrants in the US. A first  consequence of Kavanaugh's appointment to the Court

Even though Ross's memo contradicts his and DOJ testimony, Supreme Court says Sec Ross will not have to testify in the challenge to the 2020 census citizenship question, which threatens to undercount immigrants in the US. A first  consequence of Kavanaugh's appointment to the Court 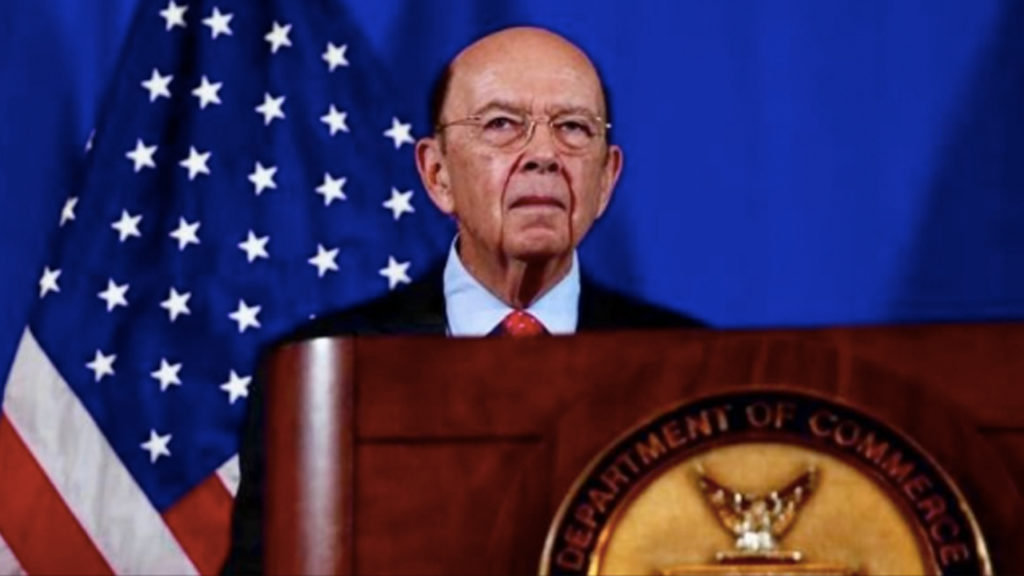 MARC STEINER: Welcome to The Real News Network, I’m Marc Steiner. Great to have you with us.

The Supreme Court just overruled a lower court decision when it decided that Commerce Secretary Wilbur Ross will not have to sit for a deposition because of a lawsuit that challenges the Trump administration’s decision to ask a question about citizenship on the 2020 Census. Why was this deposition so important? Well, Attorney General Jeff Sessions said it was his idea, so they can protect voting rights, if you believe that. But then Wilbur Ross in earlier comments uncovered said it was his idea to know who citizens really are. So, who’s telling the truth?

And regardless of the truth in this particular issue, this decision will make it easier to intimidate immigrant families because some of their family members may not be citizens, who have reason to fear ICE, being deported and having family members separated from them. There’s also a larger issue that we are seeing unfold with this decision. It shows us what a Kavanaugh appointment to the Supreme Court can mean for justice in America and how the conservative tilt can shift our nation. Or, as Matthew Yglesias Tweeted, “The reason is the Supreme Court is run by Republicans who want to help other Republicans to rig the 2020 Census, so they can elect more Republicans.”

Well, however you feel about that, this is a blow to civil liberties and civil rights for many. To work through all this, we are joined by Angela Manso, who’s Director of Policy and Legislative Affairs for the NALEO Education Fund. And Angela Manso, welcome to The Real News. It’s a pleasure to have you with us.

ANGELA MANSO: Thank you for inviting me.

MARC STEINER: So, I’d like to play this short clip, Wilbur Ross on TV talking about this decision, and then come back with another thought and have you kind of analyze what this means for us. This is the clip.

WILBUR ROSS: Justice Department feels they needed so that they can enforce Section 2 of the Voting Rights Act which protects minority voters. That’s the genesis of the request for adding this question back in.

SPEAKER: Do you think you’re going to learn anything more or will people get afraid and not even participate?

WILBUR ROSS: Well, there are people who are afraid and don’t participate right now. The question is whether that will change, and if so, to what degree it will change.

MARC STEINER: Now, the thing about this in the context of a memo that was discovered where Secretary Ross says that he made this decision himself. He wanted to do this earlier because he wanted to kind of push the citizenship question. This was his idea way before any reasoning about the Voting Rights Act and what the attorney general had to say. So, why is this important, Angela?

ANGELA MANSO: Well, it’s important because we need to understand what exactly was the rationale for this. When Secretary Ross issued his memo back in March of this year stating the rationale for it, what he stated is what you heard in that in that clip, that the Justice Department needed this to do further enforcement of the Voting Rights Act. But soon thereafter, the litigation ensued and what we’ve discovered is that in fact, as you stated, there was thinking about this, lots of discussions about this internally in the Department of Commerce and apparently the White House about adding a citizenship question. And the idea that it would be needed to enforce the Voting Rights Act is laughable and it’s merely a ruse, a justification to cover what is clearly a political decision by the Department of Commerce and by the White House, unfortunately.

MARC STEINER: So, what do you think this will mean, that Wilbur Ross will not have to be deposed in this particular case? Other states, including Maryland, have lawsuits around this particular issue as well. So, what’s the danger here of his not being deposed and where this takes this whole case?

ANGELA MANSO: Well, we certainly are disappointed that Secretary Rice will not be deposed in this case, but we know that Assistant Attorney General John Gore will be deposed. That is still on the table, that is still moving forward. And the lawsuit is still going to move forward. This is merely a stay until about the end of the month. I believe this question will be revisited. I’m not an attorney, so I can’t tell you all the particulars about how this happened.

MARC STEINER: I understand. Neither am I, it’s okay.

ANGELA MANSO: However, we do understand that the parties, the plaintiffs will still have time to do additional discovery. The trial will proceed in November. The cases in Maryland, as you stated, and the case in California I understand may be moving to court in January. So, I’m disappointed that Secretary Rice will not be deposed and will not be asked to account for what his rationale was in this and why is he wasting taxpayer dollars in this way. But we are very hopeful that we’ll get answers through the other individuals that still remain to be deposed and through the trial phase.

MARC STEINER: So, two other issues I want to raise. One has to do with this with what just happened here, what this means for the 2020 Census. And just getting to the heart of why people are so upset about this, what it means for families to have to fill the form out asking for citizenship, which really hasn’t happened in the form that gets sent to everyone for the Census. And so, what this means politically, socially, culturally and for especially immigrant people in our country.

ANGELA MANSO: Well, you’re absolutely correct. This question has not been on the decennial Census that goes to each and every household since 1950. And the question that does exist on the American Community Survey, it’s a very different format. It hasn’t it been tested for this environment. It’s been 70 years since we asked this question of every single household. And the research that was done well back in the 50s and 60s made clear that doing it in a survey format was a much better way to get the information that they were looking for.

What this means for many communities: They are frightened. They are very frightened of how the government is going to use this information. And so, there’s a great risk that they won’t complete the entire form, not just not answer the citizenship question. And what that means for communities is that the fewer folks who show up in a Census count means fewer federal dollars that go to those communities. More important than that, it means fewer seats in Congress. As we know, the first reason for the Census is to apportion seats in the House of Representatives amongst the various states, and when your population diminishes, so does the number of seats that you have in Congress. And I don’t think any state, any community wants to lose the power that comes with having a seat in Congress. So, you have that to contend with.

But back to the federal dollars, many communities stand to lose those funds because federal formulas rely on a Census count, as well as other data, to determine how much a community gets, whether it’s for roads, whether it’s for hospitals, whether it’s for schools, Medicaid and the like. So, there’s a real risk there. And I don’t know of any mayor or governor or other state elected official that would be okay with that. And also, for our community, for the Latino community, we’re a growing portion of our population. And with that size comes power. If people go into hiding, they don’t reveal themselves through this, that’s a loss. That’s a loss not just for the community, it’s a loss for the country.

So, we are working hard to educate the public about why this is important. But we have to contend with the reality that many people are afraid to give that kind of information to the government at this point. Plus, there’s also the security concerns of doing something online and whether or not there are sufficient resources available and efforts made to protect that information that the government wants us now to provide online.

MARC STEINER: And we’re also seeing now in this very volatile moment just before the elections, this is happening along with the march coming from Honduras. So, all this kind of inflames passions in this country around an issue that really divides us as Americans.

ANGELA MANSO: Unfortunately, that is the case. And many people are conflating these things. The situation that’s going on with the Honduran nationals that are doing the march to the border, that goes to an issue of immigration. And certainly, there is a demand on both sides of the aisle to come up with a solution to the problem. But right now, the Census talks about the people who are currently in the United States who are residing here, who live and reside regularly here. And they need to be counted. And we certainly don’t want there to be anything that interferes with that process. A fair and accurate Census benefits everyone and inserting a citizenship question at the last minute that hasn’t been tested, it makes no sense. And it’s going to cost taxpayers more dollars because more money has to be spent in tracking down people who don’t answer that question.

MARC STEINER: So, given I know you’re not a lawyer, so we can’t probe too deep to the whole question about Kavanaugh’s appointment and how this changes judicial decisions and what it does. Though what this does is it’s clearly another example of what that means, so I’m curious. In that context, finally, what is your strategy and the strategy of organizations as yours and others you work with and align with, where do you go from here?

ANGELA MANSO: Well, we certainly are going to be watching the courts situation very closely, as many of our companion organizations are doing. We’re also talking to Congress, we’re talking to Republicans and we’re talking to Democrats about why this is such a bad idea. The impact isn’t just to Latino or immigrant communities. We also know that many Native American communities have great concern with having a citizenship question on a form and may deter them from responding as well. We also know that there are many members of Congress who want an accurate count of the Native American community, so perhaps they need to be paying more attention to this issue.

MARC STEINER: Well, I look forward to covering this a great deal more. It’s really a very critical issue for all of us as we approach this election and approach our future here in this country. Angela Manso, thank you so much for joining us. Appreciate the work you’re doing, appreciate you taking your time with us today.

MARC STEINER: My pleasure. And I’m Marc Steiner here for the Real News Network. Thank you all for joining us, take care.