Providing a on-the-ground perspective of the actions and activism at Standing Rock, against the Dakota Access Pipeline, was essential for getting the word out explains Lorenzo Serna of the independent media outlet Unicorn Riot

Providing a on-the-ground perspective of the actions and activism at Standing Rock, against the Dakota Access Pipeline, was essential for getting the word out explains Lorenzo Serna of the independent media outlet Unicorn Riot 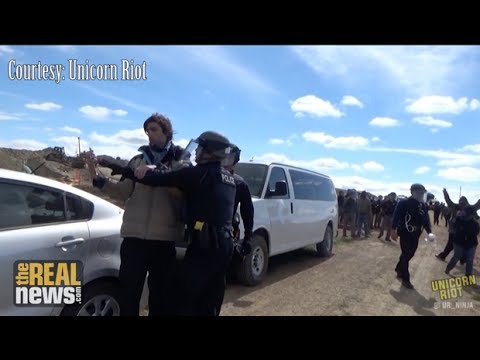 Jaisal Noor: This is the Real News Network. I’m Jaisal Noor reporting from the 2017 People’s Summit in Chicago. I’m here with Lorenzo Serna. He’s one of the original members of Unicorn Riot, who the Real News will know well because we used lots of your footage during Standing Rock. And you’re not the only, but one of main independent media outlets there. You had a team reporting where corporate media refused to go, where a lot of independent media didn’t go. From the front lines, really exposing what was happening on the ground in Standing Rock. Reporting on the government repression and the resistance by water protectors and their allies. Talk about what that was like, ’cause you really put your body on the line, collectively. Talk about that.

Lorenzo Serna: Well basically we live there. I don’t know how, when we talk about how we’re able to cover it people ask us all the time like, “How are we able to do it?” And it’s because we didn’t go there and stay at the motel or at the casino. Like we went there and we stayed as near to the camps or as near to the front lines as they were. And we slept there, like I slept in the van for the first few weeks or months, you know. And then, eventually we got a camp. So we did our best to be there every day and the only we felt we could honestly cover it is by being there when they’re going out to do an action or a prayer. That we could follow them instead of like hearing about it and trying to get there in time. We just lived amongst everybody.

Jaisal Noor: What role do you think Unicorn Riot and other independent media played in the struggle at Standing Rock. Because not only did you see the largest Native American convergence in over 100 years, but it took, really took people media, community media to a whole new level. And it really got … That combination of those two factors really got international support for what was happening in Standing Rock.

Lorenzo Serna: I think that you know, for what our goals as an organization is, is to hear from the people engaged in social struggle, you know. And so we’re not …Like I wasn’t going to Dave Archambault and being like, “Tell us why people are doing this.” I was going to the people and being like, “Why are you here?” And I think that the trying to provide some sort of unfiltered narrative from the ground as close as possible is really important. ‘Cause then you can actually hear why people are doing this. Then also for our organization, you know we’re a collective, we’re pretty well organized to spread the information within I guess our organization. It’s why we’re horizontal. And so we’re able to write about what was happening. Almost daily at times cause there’s other … Like it wasn’t just me obviously, there’s writers who are working with me. And we’re all working together trying to produce as much content about what was happening and as quickly as possible. So the narrative from that ground was going out to whoever wanted to hear it. Then of course people got interested, this got shared more and more and more.

Jaisal Noor: So, if your followers your viewers around the world wanted you to be there. But obviously the authorities didn’t. And the authorities had really a brutal crack down not only on water protectors but also by targeting media as well. I know journalists were shot at with rubber bullets, many were injured, arrested, many facing time in prison for exercising first-amendment protected speech. Can you talk about that as well?

Lorenzo Serna: I mean yeah, so like if you look at the recent leaks that came out The Intercept within those documents they mention the, you know … [inaudible 3:07] mentioning Unicorn Riot to all those authorities within the different leaks with the sheriffs were talking about us, the police were talking about us. And mostly they spoke about us as people they had to deal with, because we were putting information out too quickly and they couldn’t construct the narrative. Like they said that in their documents, internally. And so I don’t know, in the end … You know on day two I never released the footage. I didn’t want the story to turn about a journalist being under attack. But on day two a police officer walked up and swatted my camera out of my hand and got in my way. So it was really clear they know what media is, but they know who they want to be the media. And it’s not, anybody who isn’t going to them for the answers, you know? And so-

Jaisal Noor:: It’s not gonna use their official narrative?

Lorenzo Serna: Yeah exactly. And so like all the local-

Jaisal Noor:: Which is what the local media was doing.

Lorenzo Serna: Absolutely. The local media was just going to the press conferences and listening. And we were just living in the camp and watching what was happening and like sort of providing that view, right. So a lot of times our point of view is within the people looking out to what they’re seeing, which is usually a line of police, so we’re trying to clear them. And the point of view of the corporate media usually is behind the police watching them clear people out, you know. And so I mean I think that’s one of the stances, like we’re usually on the other side sort of witnessing and experiencing what the people are witnessing and experiencing, who are trying to in their minds very viscerally change the world in that moment.

Jaisal Noor: And so the struggle of Standing Rock–obviously the pipeline has been built and the oil is flowing. There’s still resistance there, they’re still aiming to defeat that. But the struggle has spread out from there as well. Talk about what’s in the future for you. We know you have been here in Chicago covering some of the struggles locally. And talk about what the future holds for Unicorn Riot.

Lorenzo Serna: I mean well right now, you know, we’re aware the resistance is spread out. We’ve had some stories come out from different resistance camps and so we’re trying to put them all together. Right now part of our crew is working on going to Europe to witness some sort of climate injustice actions there. So at least we can bring our audience across and see that this sort of world is in this movement. You know, this world is in this movement, they’re engaged in it. They’ve been engaged in it for a long time trying to stop something like climate destruction that’s happening all around.

And so we’re doing our best to try and connect all these folks and make them be able to see themselves as part of this giant organism that is resisting, you know. I think that is part of what I want to be doing as an organization, is show people the work they’re doing. Cause, that’s somebody who comes from movements you know, like when I was on the ground doing that work, I never really had a sense, you know. I knew I was involved in something, but I remember when I would go home and look and watch somebody who’d document that, I’d be like, “Wow, I can’t even believe I was doing that.” And so now it’s like I, that’s why I help them helping provide for people as them being able to see themselves, like, take these risks that you know are very much play in peoples lives … Their own lives are in danger for what they’re doing. They feel like that’s the only thing they have left to do. And I want to be able to at least let people see that people are doing that. And that they believe it and it’s for the reason that they do believe that the world is changing.

Like civilization as its structure wasn’t really working. And they have, something has to change or like their livelihood is gone–when the water is gone, their livelihood gone. And that narrative, I know it’s like, you know waters life like it’s everywhere. If everywhere you go like when, if they don’t have water, you can’t survive. You know, its like this really weird kind of genocide that’s continuing to happen. This colonization that’s continuing to happen. But now it’s structure and the fossil fuel industry taking land and their laws being created to take land from the people, you know. So it’s the same thing, just now it’s 2017.

Jaisal Noor:: And if people want to hear more and learn more about Unicorn Riot, where can they go?

Lorenzo Serna: They can go to unicornriot.ninja that’s our website. Unicornriot.ninja, we’re on Facebook, we’re on twitter, check it out. You know, we’re an independent media we’re non partisan I guess. We just kinda tell it as we see it.

Jaisal Noor:: All right, thanks so much.

Privatization and Kickbacks: Why the Healthy Holly Scandal Is Bigger Than Baltimore’s Mayor