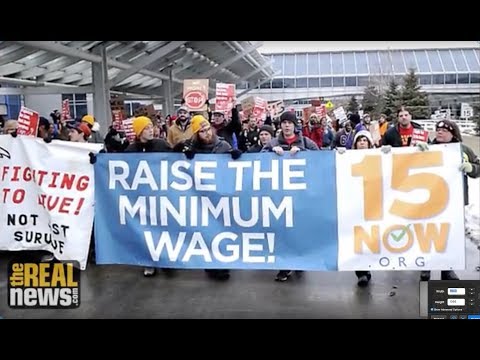 Ginger Jentzen: Yeah. I’m running as a member of Socialist Alternative. We’ve been endorsed by the Minnesota Nurses Association, the CWS, State Council, the DSA locally, and basically over the last three years, I have been the executive director for 15 Now, and that’s the campaign broadly to raise the minimum wage to $15 an hour. It was initially launched by Socialist Alternative in Seattle through the election of council member Kshama Sawant. In Minnesota, it’s been a three year campaign because we initially tried to gather signatures to put 15 on the ballot to voters, and it was a lot of the resistance of the Democratic Party led City Council there, trying to put hurdles in front of the movement.

We’ve got nearly 20,000 signatures. We have countless days of action with low-wage workers. Basically hundreds of low-wage workers, thousands in the city have advocated for, organized, taken strike action for a $15 minimum wage. It was the resistance of the Democratic Party locally that I think really shows that we need a political alternative in Minneapolis that’s going to be firmly rooted in the social justice movements that are happening in our city, and that means representation in City Hall. To that end, too, over the last 10 years, I was a tip worker myself. I worked in the service industry. I think it’s that kind of representation, people who are firmly rooted in social justice that need to have an organizing seat in City Hall.

Michael Sainato: I talked to Kshama Sawant’s people, and they told me that she wasn’t allowed to speak here. Can you talk a little bit about how socialists can penetrate [inaudible 00:01:55] like this, conferences like this that are trying to do a really broad thing but cater more a little towards the Democratic Party itself?

Ginger Jentzen: Mm-hmm (affirmative). Yeah. I think it’s really exciting moment that the Democratic Socialists of America have grown so much since the election of Donald Trump. In Socialist Alternative, we have often concentrated our resources into campaigns where we can have a real impact. That was how we got Kshama Sawant elected, and in many ways, I think that’s what we’re striving to do with the campaign in Minneapolis for me to get elected to City Council.

I think it’s really exciting in this moment with conferences like this and a lot of questioning of the Democratic Party on the whole and the different strategies. Some people are trying to go through the Democratic Party to bring about some kind of progressive change, and then others really calling for the need to build an independent socialist left or an independent party for working class people in which a socialist debate can happen.

In many ways, I think talking about socialism is really about talking democratic rights, people democratically planning and discussing and debating how our lives should run and how our lives should be from day to day. Our communities and workplaces, how to economically run the world, and then also how to socially undo the racism, sexism, and bigotry that often is … that is, frankly, totally inherent and woven into the capitalist system.

Michael Sainato: How do you think socialists should try to get legitimized by the media, by the press? Because obviously there’s not a lot of attention on socialists, and when there is, it’s mostly hit pieces about Venezuela or about how it doesn’t work. Even Bernie was attacked for even mentioning socialism. Can you speak a little bit on that front?

Ginger Jentzen: Sure. If the reactionary right is given too much space and we don’t build a viable left alternative, it’s going to continue to grow. I think with Bernie Sanders’ campaign as an unapologetic democratic socialist running for the highest office in the US and a program of free college education, a $15 minimum wage, saying black lives matter: I think that really demonstrates to people that this is what socialist politics are about. Not building our own forces and not building our own party for working class people I think will continue to sew illusions that somehow we can bring that program to light within the Democratic Party. Then, broadly speaking, with Jeremy Corbyn’s success over the weekend in really bringing down … Well, Theresa May’s government does not have a mandate to move forward. I think Mélenchon building a very viable campaign in the last weeks of the French election shows that people are really hungry for ideas that put people and the planet before profit.

Ginger Jentzen: Yeah. Well, like what we’ve done with the $15 minimum wage, through building social movements and grass roots pressure, we are making what the democrats say is impossible very possible. I think without building up a further deepening of the networks of black lives matter and a lot of what work has already gone into anti-police brutality in Minneapolis and really connecting up the program that the black lives matter movement’s put forward, I think there’s no way to really address police issues without building up that further grass roots pressure. At a minimum, I think we need to be talking about an elected civilian review board that has actual teeth, hiring and firing powers, an oversight over budget priorities in the city of Minneapolis. I think that we can build up that ability to make that happen through that grass roots pressure and actually doing the organizing necessary to take control over the police budget.

Right now in Saint Paul, Officer Yanez is on trial at the moment for the death of Philando Castile, who was murdered in front of his girlfriend and daughter in a very graphic video that went viral over the internet last year. I think the reason that he is on trial right now is because of the pressure of these movements and really linking that up to having an organizing seat in City Hall, having working people firmly represented is going to be the way we can actually address the systemic police violence that is inherent in many police forces across the United States.