Lucy Flores: The Political Revolution is About Putting People Over Party

Editor's Note: We apologize for the poor audio quality of this recording.

Editor's Note: We apologize for the poor audio quality of this recording. 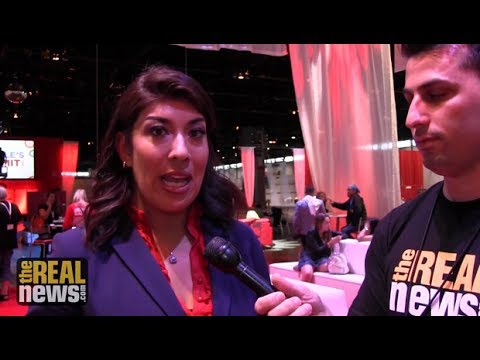 Michael: I’m Michael Sainato with the Real News Network. I have with us former Nevada congressional candidate and our revolution core director Lucy Flores. Lucy, thanks for interviewing with us. So can you tell us a little about your experience running for congress and what advice would you give to other progressive candidates challenging the democratic establishment?

Lucy Flores: Well, first and foremost, I was elected back in 2010 to the Nevada legislature and was the first Latina elected there in the history of the state of Nevada, and running for congress really was just an extension of my first race. When I first ran it was always as an honest, very open, very ‘I am here for the people,’ and it’s always going to be people, party. Now, you can imagine, after a couple of years, that didn’t necessarily get me the most friends. But it got me a lot of support, support in the community, which is where it matters.

And when I decided to run for congress, I knew that at the end of the day, that it really was just a matter of me staying focused and true to who I was. Now, ultimately, I wasn’t successful, Harry Reid and the establishment Democrats there decided to back someone else, and, look, it happens. That’s just the way that the system works right now. But that’s the point, right? That’s why our revolution exists. That’s why so many people now are engaged in this process, because the idea is that democracy should be available to everyone. And it shouldn’t be about who has the most money or who has the most establishment support or who’s gonna do favors for who in my seat, right?

So the thing that I would say to people is I didn’t fail. We made so much progress and sometimes it just doesn’t work out the first time, but that doesn’t mean we shouldn’t try it. In fact, if I can go back and do it all over again, I would do it exactly the same. So, you know, it really is about us staying focused on what we’re trying to achieve, and if I didn’t see progress happening, trust me, I would not still be in this.

Michael: Well, you had Harry Reid back [inaudible 00:02:17], but you also had EMILY’s List back an opponent. Were you expecting that sort of abandonment from your candidacy?

Lucy Flores: I wasn’t. I was not expecting EMILY’s List to abandon me the way that they did, about a week and a half, two weeks or so, after I endorsed Bernie Sanders for president. I’ve been a very, very vocal and open advocate and champion for choice, talking very openly about abortion. In fact, I talked about my own choice to have an abortion. I was the only sitting legislator, during legislative testimony, that talked about that in that way, and I suffered immensely because of it, death threats and harassment. It was really one of the most awful experienced I’d ever had, and that’s saying a lot, because I’ve been through some stuff in my time. Really, I definitely took it personal, because it was no longer about issues, it was about politics. And so for them to do that, for them to back someone who had no record whatsoever, either grassroots or certainly not on the issue, yeah, it was disappointing.

But, again, I think that it just highlights what’s wrong with our system, right? And frankly, just the fact that we have to stick to it and continue getting better and really pushing those organizations. If EMILY’s List turned around and started focusing on empowering women of color and making good choices in the future for supporting progressive women candidates, et cetera, I’m all for it, right? But we need to demand that people and organizations and elected officials do the right thing.

Michael: Cool. A few weeks ago, there was a debate within the Democratic Party about an Omaha mayoral candidate, Heath Mello, who has a record of pushing for abortion restrictions. What is your take on that debate about whether Democrats should allow, in this race, candidates like that?

Lucy Flores: To me, it’s a very easy distinction. You can be anti-choice. You can choose to live in the way that you want to live. You can choose to talk to your children in the way that you want to talk to them and try to raise them in the way that you want to raise them. As soon as you start to attempt to legislate your morals on everybody else, that’s when it’s a problem. So do I think that the Democratic Party or progressives should embrace, if you don’t necessarily believe in abortion, don’t [inaudible 00:04:58] choose not to have an abortion or don’t want their sisters or mothers to have an abortion? Sure. That’s your personal opinion in the same way that people have personal opinions about other things. But when you try to pass a law that’s against my choice, that limits my neighbor’s choice, that limits any kind, that infringes on any kind of rights that we have as women, you are no longer, in my opinion, welcome in the Democrats.

Michael: My last question, Senator Harry Reid recently retired. He, for a while, led Nevada Democrats. So how can progressives capitalize on that power?

Lucy Flores: Well, look, I think it’s an amazing opportunity, not just in Nevada but across the country, right? There’s state parties that have open positions right now. At the local level, at the state level, the key move here is to capitalize on this energy and to get involved. That’s certainly happening, I just ran into a friend of mine. She was a wonderful supporter of [inaudible 00:06:06] and she’s now chair of the [inaudible 00:06:08] Dems in Nevada. That’s amazing, right? There’s all these opportunities for progressives who are truly committed to be at the table, to bring themselves at that table, and to really move us forward from the inside because frankly, if we continue begging people to give us a chance and try to convince people to see things our way, it’s never going to happen. We have to be the ones at the table changing things from the inside out. Otherwise, we’re constantly going to be asking, never going to get [inaudible 00:06:42].

Michael: Thank you very much.