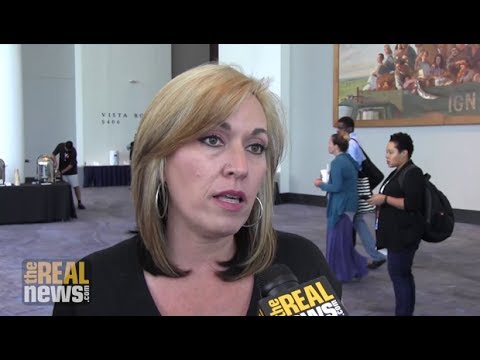 AMY VILELA: You know, I had to do, what no parent should have to do, and that’s have your daughter die in your arms. And you can’t save them. There’s nothing you can do, and I remember crying out to God, to please take me instead. When I found out what had happened, and realized the magnitude, and it wasn’t just Shalynne, but there are other Americans that are losing their life, or they’re navigating a serious illness, without any means of paying for it, or they’re worrying about that, instead of worrying about getting better. I knew I couldn’t stand by. I could not remain silent. I had to speak up, and I had to fight, to ensure that this doesn’t continue on. And that’s how I got involved in fighting for Medicare for All.

JAISAL NOOR: And create advocates for change, like Amy and David Vilela, who we met at the 2017 People’s Summit, in Chicago, which brought together voices who are demanding universal access to health care and prescription drugs, at a conference organized by National Nurses United, one of the first unions to endorse Bernie Sander’s presidential campaign. They’ve also advocated for universal health care on a national, and statewide level.

DAVID VILELA: In Nevada, since we started working, trying to do healthcare rallies, and we organized a couple healthcare rallies, formed coalitions of different groups. So since then, we got one of our Congresswoman Dina Titus, she cosponsored H.R.676, Medicare for All. Now we’re trying to put pressure on our representative, Representative Ruben Kihuen. He is actually on the progressive caucus, but he has not cosponsored H.R. 676. We’re trying to pressure him to do it, and he’s giving reasons, “I can’t do it, because we are focusing on protecting the ACA. We can’t do both.”

JAISAL NOOR: The Vilelas say they have joined a growing local movement in Nevada, to push their elected officials to support single-payer healthcare.

The weaknesses of the ACA, and he’s saying, “Look, it raised premiums for people.” Which is true.

AMY VILELA: Right. So, the ACA, some of the accusations made are correct, and that’s where it’s gaining power, in that, the ACA was torn apart, even before it began, when they didn’t do Medicaid expansion. For instance, Shalynne was from a state that did not do Medicaid expansion. They took out a lot of the safety nets that would’ve caused less people to be uninsured. There’s 30 million without insurance right now. But they’re claiming that the AHCA is the answer to what is happening with the ACA. It’s disingenuous. It’s not correct, and it’s only gonna make it substantially worse. The Democrats need to make … We need to fight, and I’m fighting as myself. I fight for the ACA, but we need to have on our platform that we are going to move forward, and push for Medicare for All. That should be on their platform.

JAISAL NOOR: Meanwhile, in California, a measure that would establish single-payer healthcare there, has stalled in the Capitol, after passing the Senate with overwhelming support. We caught up with Catherine Kennedy, a registered nurse, and a board member for the California Nurses Association.

CATHERINE KENNEDY: Really, it is about, which side are they on? Are they with the hospital industry, the pharmaceutical industry, or are they on the side of the people, where really, we need to make sure that every, really every human being has healthcare. One of the things that we’ve done, is that there’s a financial study that came out from the University of Mass., which really shows that, in California, we can do it. It’ll be a savings of over 37 billion dollars, every year. So it can be done. You know, we’re already paying into a system right now, and they just need to have the guts to pass this.

JAISAL NOOR: Also speaking at the summit were advocates for access to affordable medicine internationally, including in the United States.

AZZI MOMENGHALIBAF: Right now, access to affordable prescription drugs, is a number one health concern among Americans. And everybody knows that Americans pay the highest prices for medicines, than any other country. But I can tell you, as someone that works on this issue internationally, all over the world, that this is actually a challenge everywhere, in the world’s poorest countries, but also in the world’s wealthiest countries, with single-payer Medicare for All, universal healthcare systems. And that’s because medicine prices, just keep getting higher and higher. We have cancer treatments that are hitting the market with six figure price tags. We have the latest scandal, around the EpiPen. Insulin prices are skyrocketing, and the list goes on and on. And, right now, it’s interesting, because all over the world, since it’s a problem everywhere, you have governments really grappling with this, and trying to figure out what the right solutions are. So we have an opportunity to demand real change, around this issue, because we are all ready.

The public is already doing so much of the most important medical research and development. What we could do, is basically do research and development in a totally different way, in a not-for-profit way. And since I work internationally, I’m telling you, we have examples in not for profit drug development, for disease areas that the pharmaceutical industry has deemed not profitable. So it’s diseases of the developing world, and of the poor. And we have these models. We know how to do it in a way so we pay for all of the research and development up front, so that when that medicine becomes available, it’s available off-patent, and it’s available in generic form, and available to everyone. But, this is deeply … This is not a technical problem. We have all of the technical solutions. It is a political issue, and it’s about power, and really, the pharmaceutical industry has captured so much of that power, and we need to reclaim it back.

JAISAL NOOR: Advocates say Big Pharma’s grip on politics needs to be challenged just as much as the healthcare industry’s. For all of the real news coverage, from the 2017 People’s Summit, go to therealnews.com. With Michael Sainato, this is Jaisal Noor, in Chicago.