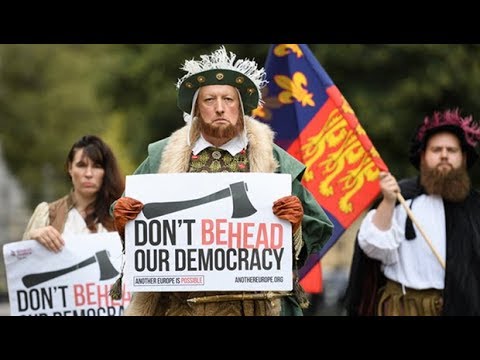 Sharmini Peries: It’s the real news network, I’m Sharmini Peries coming to you from Baltimore. The executive branch of the British government and its leader has been accused of a sinister power grab in reference to the increasingly authoritarian rule of prime minister Theresa May, a power grab so severe that some civil society organizations dubbed it ‘beheading of democracy.’ This came into debate the day after the referendum on the Brexit, which triggered the great repeal bill now called the EU exit bill. Related to all of this, on Tuesday parliament voted 320 to 301, a slim margin, to allow the UK prime minister Theresa May the ability to dominate every parliamentary select committee in the house of parliament. This will allow dozens of crucial laws to be passed without a meaningful debate and opposition scrutiny effecting everything from health and safety protections to worker’s rights. This is despite the fact that even the conservative party does not hold a majority in the house of parliament and despite many ranking parliamentarians including from her own party, has objected to this kind of a power grab.

As such, this act also violates longstanding convention that parliamentary scrutiny and select committees should represent. Joining us today to discuss the latest developments for what over 70 civil society organizations have called ‘beheading of democracy’ and the ‘great power grab’ is Steve Topple. Steve is an independent journalist and political and social commentator. He currently writes for The Canary, an independent online UK-based news organization ranked very high leading up to the last elections in the UK as a place to go, of getting to news in the UK. Thanks so much for joining us, Steve.

Sharmini Peries: Steve, the great repeal bill now called the EU withdrawal bill has passed along with what I just stated in the intro about this new piece of legislation that gives prime minister Theresa May so much power and authority, can you start off with explaining exactly how these bills are related and how this consolidation of power is coming about in the UK?

Steve Topple: Sure, okay so if we start at the beginning if you like, the first piece of legislation is the EU withdrawal bill that was previously called the great repeal bill. I think they changed it because it’s getting quite a negative press. The EU withdrawal bill went before parliament on Monday night for its second reading. This is the act, which once it becomes law will repeal the 1972 communities act, which saw the UK go into the EU and therefore, it will also wipe out all EU legislation that currently applies under UK law. The government are going to replace it with a new raft of British laws, around 12,000 pieces of legislation by the way are going to have to be passed. It’s an absolutely massive task for the government. This will essentially signal the end of the UK’s membership of the EU. This bill was before parliament on Monday night. It’s very unpopular. There’s been a lot of opposition to it. The Labour party, the opposition party in the UK tried to put a stop to this bill even moving forward past Monday night. That was voted down and so we ended up with this bill passing.

What happens now, it goes to a committee stage where it’s looked at in depth. Then it does have to have a third reading and a third vote before it actually gets passed to the house of lords to then be passed into law. The controversy surrounding this bill, the devil is in the detail if you like. Bound within the proposals for this bill are what are called statutory instruments. You may have seen this maybe in your press, it’s referred to the Henry VIII laws. What this does, it allows the government to essentially pass legislation, which bypasses parliamentary scrutiny all together and just gets discussed and drawn up in these house of commons select committee, which you mentioned in your introduction. These Henry VIII powers allow the government to pass any laws they want with the minimum of scrutiny. This is included in the EU withdrawal bill. In effect, what is going to happen is when the government are now rewriting the laws that we’re losing from the EU, they’re going to be using statutory instruments to try and put in new laws, which they claim they’re going to have to do because the legislation will be automatically weakened by leaving the EU.

However, the civil society groups, NGOs and opposition politicians say that’s not why they’re doing it, they’re doing it for a power grab so they can write what laws they want to write essentially and push them through without scrutiny. This is included in the EU withdrawal bill. This is one of the main issues.

Sharmini Peries: Now even ranking members of the parliament are calling out the government obviously. Labour party also supported some of these measures. Tell us who these Labour party members are, why they would support something that de-democratizes parliament itself.

Steve Topple: Absolutely, I mean you spoke of Theresa May’s own MP’s some of them calling her out, Ken Clarke, a very famous storied politician, he’s been around for years. He was under Margaret Thatcher’s government. He called it an absolute monstrosity of a bill, he said it was a terrible piece of legislation. He still walked through the lobby in parliament and voted for it. However, they whipped the party, they whipped their MP’s to vote against the legislation to try and block it. However, there were seven Labour MP’s who voted with the government to push this legislation through. They were Frank Field, an MP called Ronnie Campbell, Kate Hoey, an MP who led Labour’s campaign to leave the European Union, Kelvin Hopkins, John Mann, Dennis Skinner and an MP called Graham Stringer. Now they voted with the government.

Dennis Skinner gave quite an interesting interview to a website called [swarm box 00:06:49], which is an independent left-leaning news site in the UK. He said that if Labour’s amendment, which was the one I spoke of, that was trying to block this legislation in the first place, if that amendment had passed he said he wouldn’t have needed to. However, Dennis Skinner in his 40-year career has always been vehemently anti-EU. He voted against every single [inaudible 00:07:11] piece of legislation in parliament in relation to the EU, for example the Maastricht Treaty, the Lisbon treaty. He’s always been vehemently anti EU. He said quite openly that he still wants Britain to leave the EU and therefore he could not find it in his heart if he liked to vote against his own beliefs, which were that we are better off outside the European Union. I think that was over the seven MP’s which voted with the conservative government, they’re all Euro skeptic MP’s. They’re all anti-EU. I think it was the fact that the majority of them could not vote against their consciences if you like.

Sharmini Peries: Steve, one of the things that are very interesting in terms of UK politics right now, which people here in the U.S. is really following because it has such synergy to the Bernie Sanders’ movement here is the Labour party and how Jeremy Corbyn is doing it. If you might shift gears here a little bit and talk about how the Labour party is doing. It appears to be gaining control more of the control in terms of the party machinery having just won two key seats in the influential conference arrangements committee. Can you give us an update on where Labour party is at and how Corbyn is doing?

Steve Topple: Yes, it’s fascinating in the [inaudible 00:08:41] where Theresa May has gone basically having a power grab over the country if you like. Then internally within Labour you’ve got Jeremy Corbyn doing a bit of a power grab as well. As you’ve alluded to, there was a vote recently, it was about four days ago for the conference arrangements committee within the Labour party. This is a committee that decides what policies will be debated at the annual conference and it also decides internal Labour rules and politics as well. They had this vote. Two Corbyn supporters are now on this committee. Previously, it was dominated by the kind of Blair rights, the more center right wing of Labour. Now with these elections, with these two new members it is a Corbyn-dominated committee. Most of the media over here kind of touched on it. I don’t think they quite understood the importance of it. Now Corbyn’s allies dominate this committee.

Firstly, Corbyn and his supporters will be able to get the policies that they are looking to push forward put to conference to vote on. For example Trident, Corbyn nuclear deterrence, Trident is absolutely against that. If he had his way, we’d scrap it. However, he’s always come up against opposition in the past because so many MP’s within the party who have been sort of the center, more center right of the left wing are pro Trident. Now, he’s got control of the conference arrangements committee. He can push forward with a policy of unilateral disarmament if you like and scrapping Trident, he can put that to the conference. It’s also important in terms of internal politics because one of the main things that has been talked about with this conference arrangements committee is the procedures for electing a new leader. Corbyn over the two elections, when he stood for leader ran into difficulties getting nominations from MP’s because there is a baseline. I think it’s 50 MP’s have to nominate a candidate before they can stand as leader. Corbyn really struggled to get other MP’s to vote for him.

Now with the conference arrangements committee having a majority of Corbyn supporters, there’s rumors that they’re going to push through legislation to make the number of MP’s needed to nominate for someone to stand as leader a lot less. More sort of left wing politicians like Corbyn can get on the leadership slate easier when there’s an election for who’s heading up the party.

Sharmini Peries: Right, an interesting development. I thank you so much for joining us today and look forward to having you back on a regular basis for an update on UK politics, thank you.

Steve Topple: Thanks for having me.

Sharmini Peries: Thank you for joining us here on the real news network.