Lendman: Student loan industry is a racket, students should get the same low- interest loans as banks.

Lendman: Student loan industry is a racket, students should get the same low- interest loans as banks. 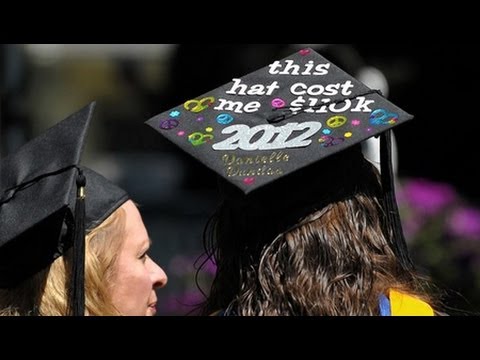 Senators left for their 4 July recess without solving one of the biggest impeding debt debacles we’ve seen in a while. On July 1, rates of federally subsidized Stafford student loans are set to double from 3.4 percent to 6.8 percent.

Now joining us to discuss all this is Stephen Lendman. Stephen is a writer, author, and radio host. His most recent book is How Wall Street Fleeces America: Privatized Banking, Government Collusion, and Class War.

Thank you for joining us, Stephen.

DESVARIEUX: So, Stephen, we’re hearing that as many as 7 million college students could be affected by this interest rate hike. Can you give us a sense of what sort of loans will be affected and will students who are renewing loans be affected?

LENDMAN: Jessica, I think an overall view of the student loan situation might be best to start off with. The only way to describe what’s going on is a racket, an enormous racket that entraps millions of students. Besides Stafford loans, we’ve got maybe close to 40 million students that are entrapped in debt because of the student loan racket. In both of my Wall Street books, I have chapters on this. The chapters were written some time ago because my most recent book, Banker Occupation, came out in December of last year. But this is an enormous scam on young people, on a generation of youths.

And it’s coming not only at a time when millions of kids will finish their education debt-entrapped. But what have they got to look forward to? We have an environment where good jobs aren’t available. You’re paying thousands of dollars, many thousands of dollars to get an education. You’re coming out with no opportunities. The 7 million or so involved in government guarantees, Stafford loans, on Monday they will see their interest rates rise from 3.4 percent to 6.8 percent. It’s coming at a time when low rates are virtually zero. If you are a banker, you pay virtually zero interest rates. If you are a student, you pay 6.8 percent. It involves debt entrapment. There is no way out from under these loans. If you can’t repay them, if you default–you cannot default. You will have penalties. You will have other add-ons. You will literally be debt-entrapped until the day you die. The only way out from under them is either die or leave the country.

DESVARIEUX: So, Stephen, let’s talk specifically about policy. I want to get a sense of what President Obama’s plan is for reducing student debt.

LENDMAN: Whatever market rates are, that’s what Obama wants. Market rates are very low now. I’m old enough to remember the end of the 1970s and the 1980s. In 1979, average low rates were 11.2 percent. Two years later, it peaked in June 1981 at 20 percent. Well, you know the old expression: what goes around comes around. Rates are rising now. If you link student rates with market rates, low rates today will eventually be higher rates. They’ll be much higher rates. They’ll become much more unaffordable than they are now. The Republican plan really isn’t much better, but it literally is better than what Obama is proposing.

DESVARIEUX: What is the Republican side proposing?

LENDMAN: Republicans want rates linked with ten-year treasuries. Ten-year treasuries right now are about 2.5 percent. Well, a few months ago, they were 1.5 percent. Maybe six months from now they’ll be 3.5 percent or 4.5 percent. If they keep going up, they’ll be trapped with those rates. I mean, it literally is you cannot win with either plan. I’m sorry. The Republican plan does have an escape clause. Obama’s plan has no escape clause. The Republican plan wants to cap rates for Stafford loans at 8.5 percent, so no matter how high ten-year treasuries go, students entrapped in debt will only pay a maximum of 8.5 percent. That’s the way the plans stack up. The Obama plan is you literally can get entrapped in a bottomless pit where rates can go as high as markets want to take them, and you literally–as bad as the entrapment is now, it can be much, much worse ahead.

DESVARIEUX: So it sounds like we’re talking about one bad plan and one worse plan. What sort of policy recommendations would you make if you were the person in charge and trying to reduce student debt?

LENDMAN: If I was in charge, Jessica, I never would have come up with a plan like this in the first place. If I was in charge now, beginning now, beginning Monday morning, with literally complete power, I would scrap the entire student loan program. I would do it with an explanation that politicians never give. I would explain–students don’t need an explanation, but I would explain it for others who do need it. Student loans are a scam. You literally hike it out from under them. You can’t default. If you do, you get entrapped in permanent debt–it’s permanent debt bondage now. You’ll get trapped entrapped in worse student debt bondage. If you can’t repay, you pay penalties, you pay extra add-ons.

It’s a terrible system. It’s a system that’s supported by Republicans and Democrats. It never should have been enacted in the first place. It’s second only in size to home mortgage debt. If you can believe this, student [incompr.] rises on average about $3,000 per second.

And this week, Senator Sherrod Brown introduced a bill that would allow students to refinance. What do you make of these plans for students being able to refinance their debt? Is it actually something that would decrease their debt in the long run?

LENDMAN: Oh, it’s going to increase it. There’s no question about it. The only way students [incompr.] finance debt is at the same rate that bankers finance theirs. If bankers pay anywhere from 0 to 0.25 percent, why shouldn’t students get the same rate? Bankers are very, very wealthy. They pay bonuses in the billions of dollars. They make huge salaries. Students are basically impoverished. I remember when I was a student I could barely make ends meet. Students today are much worse off than I was. Why can’t students get the same benefit as bankers get? If I was Sherrod Brown, if I was as a czar controlling this program, I’d give them the same deal as bankers. I certainly would give them a deal any worse than bankers get.

Instead, the plans, maybe a Brown plan, maybe another plan, maybe a number of plans coming out of the Congress, out of the House, out of the Senate, they’re all scams. Some are better than others. All of them are plans that nobody, no legitimate politician should impose, especially on a student. But when you begin a working lifetime, again, you can barely make ends meet, you can barely get by. You’re just starting out. You have no savings. They should get a terrific deal. They should get a deal to help them start out without getting further debt-entrapped. Instead, the plans that are being proposed take a bad system and make it worse.

DESVARIEUX: Well, thank you for joining us, Stephen.