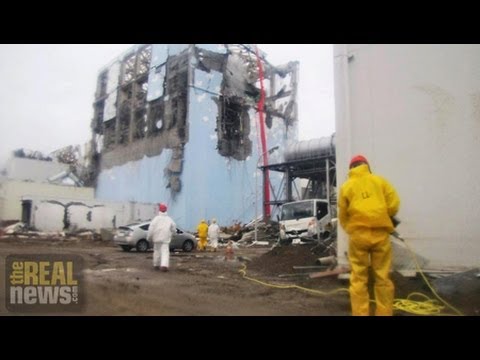 It’s been nearly three years since a massive earthquake hit Japan on March 11, triggering a tsunami, which led to one of the worst nuclear disasters of all time. On Monday, the Japanese government also announced that it will allow some residents to return to Fukushima, despite the news that there’s been another leak of contaminated water at the Fukushima Power Plant. Many questions have remained unanswered about the Fukushima disaster, like if it was preventable and if we should be concerned about other nuclear facilities in the U.S. and worldwide. Some of these questions are answered in the recently published book titled Fukushima: The Story of a Nuclear Disaster.

With us to discuss this exposé are the book’s authors.

We have David Lochbaum. He’s the director of the Union of Concerned Scientists’ Nuclear Safety Project. He worked at U.S. nuclear plants for 17 years and was a reactor technology instructor for the Nuclear Regulatory Commission.

Also joining us is Susan Stranahan. She was the lead reporter of The Philadelphia Inquirer‘s Pulitzer Prize-winning coverage of the Three Mile Island accident.

SUSAN STRANAHAN, COAUTHOR, FUKUSHIMA: THE STORY OF A NUCLEAR DISASTER: Thanks very much.

DAVID LOCHBAUM, COAUTHOR, FUKUSHIMA: THE STORY OF A NUCLEAR DISASTER: Thank you, Jessica.

DESVARIEUX: So your book goes into great detail about what happened at Fukushima. David, I’m going to start out with you, because from a regulator’s point of view, do you see this being avoided in the first place? And if so, how?

Had any of our plants been challenged in that same way, they all would have failed in maybe a little bit longer or a little bit less time, but none of them were invulnerable to that type of challenge.

What we think the accident showed or demonstrated was that you can’t assume an accident’s only going to be so big and not going to be any larger. Whenever you draw a line at some barrier, like an x foot tall wall or a so-many feet thick concrete, you need to ask yourselves and answer: what if it’s greater than that? You’ve got to have a plan B available and not just rely on miracles to save the day.

DESVARIEUX: Okay. And I want to give our audience a sense of what it’s like in Japan in terms of their nuclear facilities. Only two of Japan’s 50 nuclear facilities are currently operating, and Japanese commercial nuclear operators are saying that they are implementing new safety standards and should be allowed to reopen due to the much needed energy supply.

David, from your perspective, should they be allowed to restart?

LOCHBAUM: If the fixes that are being implemented will ensure that you’re protected against things and you don’t have to rely on miracles, then the plants could be safely restarted and the risks appropriately managed. If all you’re doing is pasting Band-Aids over problems, building taller seawalls (because that’s what failed at Fukushima), then that short-sightedness will set the stage for disasters tomorrow.

DESVARIEUX: And, Susan, you covered the Three Mile Island disaster, and it’s considered to be the worst U.S. nuclear disaster. Were there changes to safety regulations implemented in the U.S. after that occurred?

STRANAHAN: There were some, but they weren’t adequate. Nor did they address what is the fundamental safety issue that remains, and that is the mindset that prevails both among regulators and the nuclear industry that nuclear power already is so safe that we don’t have to plan for the unexpected. In other words, we can say that an accident will only entail this, and that the chance of anything worse than that is so low we don’t need to prepare for it. That was largely a problem at Three Mile Island and definitely a problem at Fukushima.

DESVARIEUX: Okay. And, David, in your opinion, do you see–I mean, right now we have the U.S. government just promise $8.3 billion loan to guarantee to help the Southern Company build two nuclear reactors in Georgia. Do you think that current regulations safeguard against a Fukushima-style disaster here in the U.S.? And can you speak to specifics?

LOCHBAUM: Yeah, there are a lot of safety regulation shortcomings that we think need to be rectified to provide a solid foundation for the existing nuclear power plants and any new nuclear power plants we build in the United States. For example, half of the reactors operating today in the United States do not meet the NRC’s fire protection regulations, even though the fire hazard represents the same threat of reactor core meltdown as all other threats combined. And that’s when you meet the regulations. In addition, about a third of the reactors in the United States aren’t protected against flooding if an upstream dam were to fail. So another 25, 27 reactors are not protected against earthquake hazards. And we’ve known this for years, and we’ve tolerated that rather than fixing it.

The proper foundation for nuclear power new and existing would be a nuclear regulator that enforces federal safety regulations, rather than in just setting them and watching plants live well beneath them year after year.

DESVARIEUX: I’m listening to both of you, and it sounds very interesting. It seems very credible. I mean, both of you have experience in this field. So I want to understand the interests, though, at play here.

Susan, maybe you can speak to this a bit. What sort of interests do we have here? What are the competing interests? Why aren’t we seeing more regulation?

STRANAHAN: Well, I think that part of it is, as we’ve said, it’s the belief–we call it the myth of safety that has become the mantra of both the industry and regulators, that everything is safe, we don’t need to make it safer. And of course with every safety improvement comes increased cost for the operators. And the operators have consistently been able to make the case that reactors are so safe we don’t need to spend the extra dollars to make safety improvements.

And we say in the book, if TEPCO, the owners of Fukushima, went out and asked the people of Japan today whether they should have invested a couple of million dollars to make a certain safety improvement but that they did not because it cost too much, you can bet that the Japanese people would say they should have spent the money instead of the multiple billions of dollars of damage that the country has sustained.

DESVARIEUX: David, what’s your take? What interests are behind the scenes, really pulling the strings here?

LOCHBAUM: Well, the nuclear industry is a very large contributor to political committees. They fund Republicans and the Democrats quite a bit. Plus there’s a lot of jobs at stake. If nuclear power plants were to shut down because of economics, most of these are located in remote communities where that’s the biggest job farm in town. So it’s difficult to lose the jobs or risk the jobs, to have the task revenues done.

But as you mentioned earlier, all but two of the plants in Japan were shut down as a result of the Fukushima accident. So, basically, the 20 percent of our electricity which is generated by nuclear power is being gambled on none of the plants having an accident. That’s a huge gamble, both economically and from a safety standpoint. And fixing some of these problems is relatively cheap insurance against those kind of bad days.

DESVARIEUX: Alright. David Lochbaum, thank you so much for joining us.

DESVARIEUX: And Susan Stranahan, thank you so much for joining us.

STRANAHAN: Thank you. It’s been a pleasure.

Journalist Susan Q. Stranahan was the lead reporter of the Philadelphia Inquirer’s Pulitzer Prize-winning coverage of the Three Mile Island accident.  She has written about environmental and energy issues for national publications for more than 30 years.  She lives in Maine and also is author of Susquehanna: River of Dreams.

Dave Lochbaum worked at nuclear power plants for 17 years and is one of the nation’s top independent nuclear power experts. As director of the Union of Concerned Scientists’ Nuclear Safety Project, he monitors ongoing safety issues at U.S. reactors, testifies before Congress and the Nuclear Regulatory Commission (NRC), and provides informed analysis of nuclear…