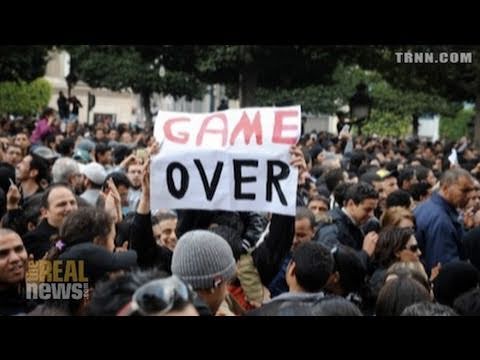 PAUL JAY, SENIOR EDITOR, TRNN: Welcome to The Real News Network. I’m Paul Jay in Washington. Thousands of people continue to demonstrate in Tunisia against the national unity government. Now joining us in Washington is Samer Shehata. He’s an assistant professor of Arab politics at Georgetown University and author of the book Shop Floor Culture and Politics in Egypt. Thanks for joining us, Samer.

JAY: So, first of all, talk about what’s going on in Tunisia. If I understand it correctly, people are not accepting this interim government as a real change.

SHEHATA: That’s right. Over the last week or so, since the departure of Ben Ali from Tunisia, there has been protests, continuing protests in Tunis (the capital) and in other places. Many demonstrators and much of the populace wants a complete change of government. They don’t want just Ben Ali gone; they want the regime gone. And that means figures who were affiliated with the regime who are–now occupy the position of interim president, interim prime minister, and so on. So that’s part of the continuing battle going on. Of course, the interim government, many of the individuals, including Mohamed Ghannouchi, the prime minister, has resigned from the ruling party, as have all of the other ministers, as a way to quell some of the protests, to differentiate themselves from the previous regime. Yet for many protesters this isn’t enough, and they’ve been asking for much more.

JAY: We saw some reports of some policemen actually joining in on the demonstrations. Is there any indication how far this is spreading? If you start to have defections from the army and the police force, then this becomes something more profound.

SHEHATA: Yes. Well, the police demonstrations that took place in the capital, Tunis, several days ago were meant to accomplish a number of things. First, many police officers and policemen were complaining about the treatment that they received at the hands of their superiors under the previous regime. It was also, really, a signaling mechanism by many police individuals to indicate that they are with the Revolution, that they are not against it, and they are Tunisian patriots, to try to quell ill feeling towards the security force more generally, as it were.

JAY: Ben Ali, the former president, was known for his cooperation with the IMF and the World Bank and generally what’s referred to as neoliberal economic policies, privatization and such. Is this rebellion aimed at those policies as well?

SHEHATA: I think that there’s no question that part of the Tunisian revolution is aimed against what was called the Washington consensus or neoliberal economic policies. The case of Mohamed Bouazizi, the individual who self-immolated himself on December 17, is an example of this. He was a high school graduate who was forced to sell fruits and vegetables in the local market in his town. There are millions of cases like Mr. Bouazizi, people who have not only graduated from high school but graduated from college who don’t find gainful employment. Economic development has been very unequal in Tunisia, regionally as well as among socioeconomic groups. And this kind of economic reform has in many cases, not particularly–not only Tunisia, but in Egypt as well, led to increasing income inequality. So part of this rebellion is certainly against those kinds of policies championed by the IMF, the World Bank, and the international financial institutions. And what’s interesting to note is that it is very likely that any future government of Tunisia will be much less willing to incorporate those kinds of policies in their economic plans. In fact, we have already seen neighboring countries–Algeria, Egypt, and Jordan–increase subsidies on basic foodstuffs to try to quell and preempt protest based around these issues. It’s also likely that countries in the region are going to think very hard before continuing privatization policies, which puts people out of work and so on and which is along the lines of neoliberal economic thinking.

JAY: So protests have now spread to Algeria, Yemen, Jordan, Egypt. How significant are they? Does one think that this could really catch fire?

SHEHATA: I think it’s already caught fire. And quite unfortunately, in a very macabre way, we’ve also seen individuals light themselves on fire across the region, imitating Mohamed Bouazizi. We’ve seen this occur in Mauritania with one individual doing that, in Algeria a number of people, in Egypt five or six people have set themselves on fire and at least one has died, as well as in Saudi Arabia. And of course there are all kinds of other implications, in terms of increasing the number of protests against local regimes in a number of these countries. Whether or not this leads to a regime falling or not is another issue. And I think it would be a mistake to think about this in terms of dominoes and to think whether this domino effect is successful if a regime falls or not. I think there are all kinds of implications that are already taking place in the region. And I think regimes themselves are thinking once and twice over about the policies they’re undertaking, about whether to use repression or not, about economic issues. And that is certainly a consequence of the Tunisian Jasmine Revolution. The point is that the Tunisian revolution, the Jasmine Revolution, has elicited really tremendous hope and inspiration across the Arab world. People are holding up Tunisian flags across the region, and Tunisia has really become a model of inspiration for Arabs struggling against autocratic regimes from Morocco all the way to Syria.

JAY: Thanks for joining us, Samer.

Samer Shehata is an assistant professor of Arab Politics at Georgetown University. He is the author of the book: “Shop Floor Culture and Politics in Egypt” published in 2009. Samer has also written numerous articles on Arab politics for the International Herald Tribune, Boston Globe and the Arab Reform Bulletin.