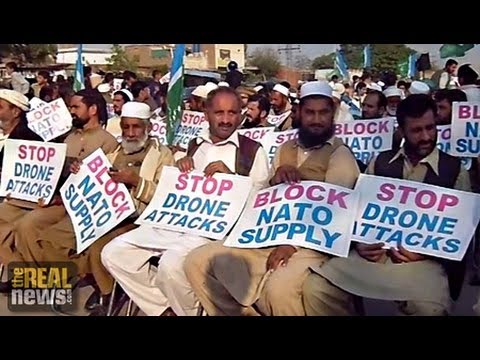 In Pakistan, drone strike opponents have succeeded in blocking a major NATO supply route to Afghanistan for the third straight day. They are protesting the ongoing U.S.-led drone strikes, which have killed hundreds of civilians. Opponents held a massive demonstration over the weekend and announced that they will block NATO shipments until the U.S. drone war in Pakistan comes to an end.

Now joining us to discuss this and the growing opposition to drone strikes is Sana Saleem. She is the director of human rights organization Bolo Bhi, which means speak up in Urdu. And she’s a blogger at The Guardian and Global Voices.

Thanks for joining us, Sana.

SANA SALEEM, WRITER AND HUMAN RIGHTS ACTIVIST: Thank you for having me.

DESVARIEUX: So, Sana, let’s talk about the issue of drones in Pakistan and some of the internal politics here. For some time, the Pakistani government privately supported drone strikes. More recently, they have demanded the U.S. halt them. Yet the current anti-drone protests are being held by a federal opposition party. Where do the major political parties and Pakistani public fall on the issue of drones?

SALEEM: Sort of going back on, you know, drone warfare in Pakistan and how it began, drone warfare began during the time of General Pervez Musharraf, which was essentially during a government which came under dictatorship. And so, therefore, there was lots–in fact, the entire war in Afghanistan and the whole alliance with the U.S. on the war on terror came during General Musharraf’s time. And because it wasn’t a democratic government and the Parliament at that time was not considered truly democratic, he did not follow the usual due process of now, which is essentially that the Parliament is briefed by the prime minister, and the prime minister is first briefed by the military. And so whatever military understanding is–whenever military cooperation is being undertaken by the government, it is being considered at every level, and everybody’s been taken into account. When this happened, unfortunately, it was a military government in Pakistan, and therefore a lot of the, you know, let’s say, undercover agreements with the American government that our government had had were not unearthed until much later.

This happened in 2012, when the Pakistani government, the Foreign Ministry, for once, took a very strong stance on drone strikes and they adopted a policy whereby the foreign office in Pakistan would always issue a statement opposing a drone strike every single time a drone strike was reported. And you’ve seen that from, you know, the past year.

And before that, even before that, soon after the Musharraf-led government ended, we’d seen a strong opposition to drone warfare. And as a matter of fact, a lot of the opposition that was built in to impeach then-president Pervez Musharraf was around the fact that he had extensively cooperated with the U.S., and also the fact that he had cooperated with drone strikes taking place in Pakistan.

And so for the past year we’ve seen an increased number of statements coming in from the Foreign Ministry. For now, all major political parties on the record are–consider drone strikes a violation of Pakistan’s sovereignty. They also consider it a human rights issue. But none of them, even the one that is currently undertaking these protests, PTI, have taken any strong substantial steps to put an end to it. It’s always the fact that, you know, these strikes continue to happen even though the Foreign Ministry has been continuing to issue statements.

DESVARIEUX: Okay. And I want to get to the point about those who are saying that–I want to bring up the counterargument to what drone opponents are saying. You have some drone supporters basically making the case that drones are a more humanitarian alternative to sending in ground troops, that there will be fewer civilian casualties. What’s your response to that argument?

SALEEM: So we cannot make that argument entirely based on facts, because, I mean, on both sides, we do not–like, drone strikes–most number of drone strikes that have occurred have occurred in the Federally Administrated Tribal Areas of Pakistan, where there is little to no coverage at all. So we do not exactly have the number of deaths.

But the idea is that this has been happening for the past many, many years. The FATA, or the Federally Administrated Tribal Areas of Pakistan, are not under [parliamentary] control. They’re not–they do not–laws that are passed in the Parliament do not apply in these areas. There has been no move in bringing in reforms so that these laws may apply there. There has been no move in applying or passing a counterterrorism strategy.

So the argument, even with drone supporters, has always been the fact that they think that, you know, they go with the policy that beggars are not choosers, and the fact that the army cannot operate in those areas–drones are our best bet.

But on the contrary, opponents of drones–and I like to put myself in that category–would like to see concrete counterterrorism strategies put in place so that we can have that due process, rather than going for a process that we can call extrajudicial killings of both civilians and also terrorists.

DESVARIEUX: And just really briefly, Sana, do you think these protests, these ongoing protests, are actually going to have any sort of effect on U.S. policy in Pakistan, and even Pakistani policy agreeing to this U.S. policy?

SALEEM: Unfortunately, even though I strongly oppose drones, I do not believe that these protests will do anything more than just bravado or just to show off power, because, again, the Pakistani political parties have made little to no movement in actually getting a counterterrorism policy in place. They do not currently have, even after ten years of war, a counterterrorism strategy that can display what in the long term will the forces be doing, how will they be enacting in these areas.

If they are suggesting, like you said, like you mentioned earlier, drone supporters will always say the fact that, you know, there are militants out there, and because drones are supposedly targeting those militants, those are our best bet, well, if the Pakistani government does not want drones anymore or just thinks that these are killing civilians, we need to be able to create alternatives. And the alternatives can only be created if there is a strategy or a clear path.

And not only is that clear path done by taking the military and the Parliament as a whole in confidence, plus also the people, and then taking the U.S., which is undoubtedly our ally on this war, into confidence–otherwise, there cannot be any concrete, you know, solution to any of these protests. I just think that this is–I mean, unfortunately, this looks like grade three power, this looks like a great, you know, bravado show of power and all that. But I don’t think this can have any substantial changes.

And also, more importantly, due process should not be influenced solely by street power. This should be done through proper channels. This should be sustainable and substantial. And this can only be done if clear policies are implemented by the government.

Thanks for being with us.

Sana Saleem is CEO of human rights organization Bolo Bhi, which means “Speak Up.” The organization focuses on policy, advocacy and research. She’s an activist and blogger at The Guardian, Global Voices and Dawn.com.