Sara Rosenbaum, Professor of Health Law and Policy at George Washington University, explains that the GOP Health Care bill would completely restructure Medicaid for everyone, not just those who currently benefit from Obamacare

Sara Rosenbaum, Professor of Health Law and Policy at George Washington University, explains that the GOP Health Care bill would completely restructure Medicaid for everyone, not just those who currently benefit from Obamacare 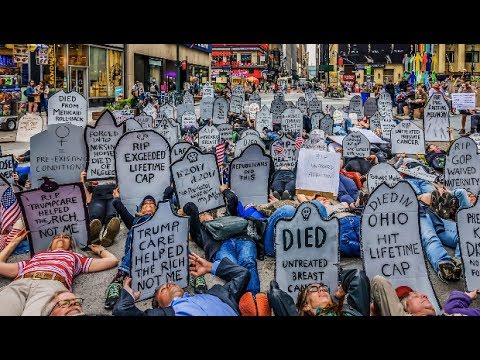 AARON MATE: It’s The Real News. I’m Aaron Mate. Senate Republicans have delayed a vote on their bill to repeal the Affordable Care Act and take away healthcare from millions of people. Senate Majority Leader Mitch McConnell says he will delay the measure until after the July 4th recess.

MITCH MCCONNELL: We’re going to continue the discussions within our conference on the differences that we have that we’re continuing to try to litigate. Consequently we will not be on the bill this week but we’re still working toward getting at least 50 people in a comfortable place.

AARON MATE: One reason some Republicans might not be in a comfortable place is because of the backlash their bill has received. The Congressional Budget Office says 22 million Americans would lose their health insurance over the next decade. 15 million of them would lose their insurance through Medicaid. The money no longer spent on their care would then become an effective tax cut for the wealthy. Senator Bernie Sanders denounced this on Monday.

BERNIE SANDERS: This bill really has nothing to do with healthcare. Rather it is an enormous transfer of wealth from the sick, the elderly, the children, the disabled, and the poor into the pockets of the wealthiest people in this country.

S. ROSENBAUM: Thank you for having me.

AARON MATE: The vote has been delayed but the bill is still very much on the table. Can you talk about its impact on Medicaid?

S. ROSENBAUM: Well, the Senate bill, like the House bill, would have a profound impact on Medicaid. It would change the terms under which Medicaid has operated for 50 years. Medicaid has been a partnership between the federal and state governments as the principle meals, of course, by which states pay for healthcare for indigent populations. So the legislation would not only curtail the special funding that states were given in 2010 in order to support the expansion of coverage to all low-income adults but the legislation would also completely restructure the basic way that federal Medicaid payments are received for all populations, not just for the expansion population but for children, for children and adults with disabilities, for pregnant women, for the elderly.

The basic change that the legislation would introduce is one that would place an arbitrary limit on the amount of federal funds that states could receive no matter how much the Medicaid programs cost them. So states would be in a position in which they either had to make up billions and billions of dollars in lost federal funding out of their own pockets or essentially give up big chunks of their Medicaid programs.

AARON MATE: Can you talk more about how this would work in terms of changing the structure of Medicaid funding from cost-sharing between the federal government and states to this block grant funding of Medicaid and how that would impact the healthcare of those who receive it?

S. ROSENBAUM: Well, sure, but I want to clarify that Medicaid payments are not limitless. States are very vigilant about budgeting for their Medicaid programs. Medicaid grows at a rate much slower than commercial insurance or Medicare, which is one of the reasons why the open-ended relationship has always worked because states have a natural incentive not to spend crazily on their Medicaid programs because they have to put up the money. The federal government doesn’t contribute unless the state spends, so states have gone a great distance in holding their own expenditures in check which is why the federal cap is a solution for a problem that doesn’t exist basically.

Now in terms of what this would look like for states and the estimates that states would have to find a total of hundreds of billions of dollars to offset the federal cuts with the states that would be hurt the most, of course, the states that have really done the most for their populations. They’ve expanded their eligibility rules. They offer enriched services to a high-cost population. They do a lot, say, for children and adults with disabilities. The effect of the cap would be to force these states to, as I said, either come up with a lot more money that no state has budgeted for or begin to severely reduce their Medicaid programs simply because they can’t afford to offer the services anymore. They can’t pay for a greater share of the cost and the federal government has stopped contributing.

AARON MATE: So, for example, people who are in nursing homes. There’s something like 1.4 million people currently living in nursing homes in the U.S. Most of them are covered by Medicaid. If this bill goes through, could they be kicked out of their nursing home?

S. ROSENBAUM: Well the expectation is that states will struggle the most with the highest-cost, highest-need populations so it is elderly people with dementia in nursing homes. It is adults with extensive physical and mental disabilities who are able to live on their own and work on their own but need a lot of care. They need personal health services. They need special equipment. It is children with disabilities. There are a lot of children with disabilities on Medicaid, including children in very much middle income families, because the cost of their care is so much greater than any employer plan covers. So everybody’s biggest concern is over the highest-cost children and adults and they come in all shapes and sizes.

AARON MATE: In terms of how this is paid for, a key component of this measure would be to take the money away from Medicaid and basically pay for a tax cut for the wealthy, right?

S. ROSENBAUM: Yes, if you look at the budget estimates that were prepared, the Senate estimate was released yesterday, on Monday. The budget estimate shows quite clearly, which was also the case in the House bill, that essentially the Medicaid cuts as well as cuts in the subsidy payments for people who buy subsidized insurance through the marketplace that those cuts translate into very major tax cuts that skew heavily toward well-to-do people, including people who are downright fabulously wealthy like Warren Buffett who, you know, calculated that the size of the tax cut he would get in that measure. That tax cut is being financed through Medicaid and through a reduction in premium subsidies.

AARON MATE: Finally, Professor, can you talk about the politics here? In terms of the fact that the CBO estimate is that 22 million people would lose their health insurance, 15 million of them are on Medicaid. People who are on Medicaid don’t have a huge lobbying operation because lobbying operations take money. So can you talk about the limitations of political power for people who want to protect their healthcare but stand to lose it by the legislation in Washington right now?

S. ROSENBAUM: Well, actually, I think it’s very much the opposite. I think that what has emerged over the past few weeks is that in many ways this legislation really is all about Medicaid. It’s all about essentially turning Medicaid into a cash cow for tax cuts and people figured that one out. To a lesser extent this is true with the subsidies but it is most obviously true with Medicaid. What has happened over the past several weeks has been what one could think of as a legislative Dunkirk. That is you don’t have a program that reaches 75 million people without also having a program that is familiar to most people. So we see public opinion polls in great support of Medicaid. We see an outpouring, an absolute outpouring across the country of support for this program that is so maligned and so misunderstood and performs such vital functions in the healthcare system.

AARON MATE: And that public outcry that you talk about is sure to continue as the Senate delays this vote but has not killed it yet. Professor Sara Rosenbaum, founding chair of the Department of Health Policy at George Washington University. Professor, thank you.