In an attempt to call Congress to act on immigration, the largest number of undocumented immigrant women submitted to arrest

In an attempt to call Congress to act on immigration, the largest number of undocumented immigrant women submitted to arrest 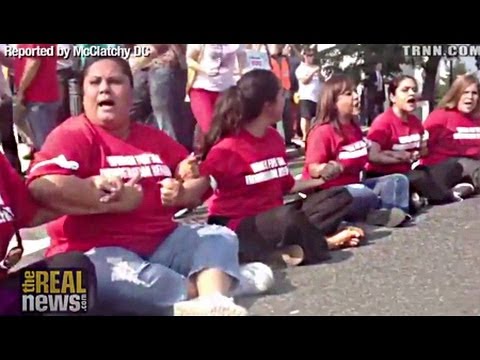 More than 100 women were arrested on Thursday while protesting Congress’s inaction on dealing with comprehensive immigration reform. President Obama and immigrant advocates have urged action on immigration reform, but it appears unlikely the House will approve a bill this session. The Senate passed its version of the bill in June, but the Republican majority in the House is taking a more piecemeal approach.

Now joining us to discuss what’s behind the arrests is Sarah Rempel. She’s the policy attorney with Centro de los Derechos del Migrante.

Thanks for joining us, Sarah.

SARAH REMPEL, POLICY ATTORNEY FOR DMC: Oh, my pleasure. Thanks for inviting me.

DESVARIEUX: So, Sarah, will you just briefly explain to us what happened on Thursday? And who were these women that were arrested?

REMPEL: Well, on Thursday, there were over 100 women were engaged in an action at the Capitol in Washington, D.C. They were there to protest the currently unjust immigration laws and to advocate for a more just immigration system as a part of the We Belong Together Campaign, which is a campaign of women advocating for comprehensive immigration reform that keeps in mind women’s concerns and the way that immigration laws have disproportionately impacted women.

They displayed tremendous courage. Over 25 of the women were undocumented and displayed courage in their action and in the arrest. And I would like to highlight Mónica Ramírez, CDM’s deputy director, who has a newborn infant, and she was also arrested and separated from her infant son for most of the day yesterday.

These women were coming together to advocate for Congress, specifically the House of Representatives to create a just immigration system that protects and advances women’s issues, women’s concerns, and women’s rights.

REMPEL: Well, some of the current enforcement in terms of the deportations has really ripped apart families, which–family unification is everyone’s concern, but tends to harm women more when they are separated from their children.

DESVARIEUX: Well, President Obama, would he have the authority? Could he use his executive powers to actually halt some of these deportations?

REMPEL: The executive branch and the president and some of the agencies, such as the Department of Homeland Security, could make some administrative changes to slow or halt deportations.

DESVARIEUX: How does your organization feel about the Senate bill that was passed in June? Let’s take a look at a statement by Abraham Paulos. He’s the head of immigrant justice organization Families for Freedom. And he says that this version overemphasizes the enforcement and the criminalization of immigrants. Quote, “Among our biggest concerns is that S. 744 systematically binds a criminal legal system rooted in mass imprisonment with an immigration system driven by enforcement. Along with the current push for enforcement, the criminalization of our immigrant communities will continue to grow in order to justify the billions of dollars being pumped into immigration enforcement.” What do you make of his statements? What do you make of the Senate bill that was passed in June?

REMPEL: The Senate bill was a bipartisan compromise bill. It certainly does not go far enough. And it is heavily enforcement focused.

DESVARIEUX: Okay. And if you could author a bill, what would your version include?

There should also be protections for workers in their home [incompr.] countries, so that they’re not subject to recruitment abuse and fraud. And any border security measures should not be extreme and unduly harsh.

DESVARIEUX: And when you mentioned a pathway to citizenship, what would your timeline look like for those who are aspiring to become Americans?

REMPEL: I don’t have a specific timeline in mind, just that it has to be reasonable, a reasonable amount of time for people to get on the pathway, and then a reasonable timeline in order to achieve legalization and citizenship.

I do understand the reason for the [incompr.] and the best case scenario, the Senate bill is, you know, 13 years, unless you’re a farmworker (it’s a little bit shorter). But I understand the reasons for making the pathway to citizenship that length of time. But it is extremely arduous for the undocumented population, some of the requirements of the Senate bill, in order to achieve legal status and citizenship.

DESVARIEUX: And you’re talking specifically about the fines and things of that nature that they’d have to pay?

DESVARIEUX: Okay. Well, thank you so much for joining us, Sarah.