The “enduring” occupation of Iraq 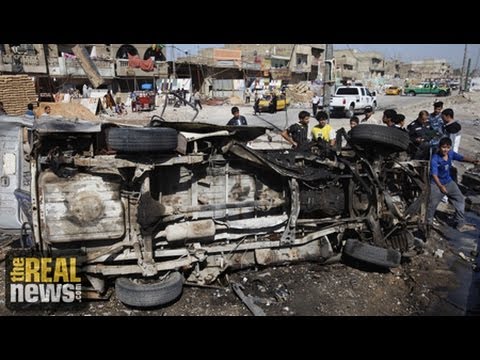 On Tuesday, a bombing near a mosque in northern Iraq claimed the lives of at least 12 Sunnis. According to reports, no one group has claimed responsibility. This attack follows months of increased sectarian violence resulting in more than 5,000 Iraqi deaths since April.

Here to unpack the increase in sectarian violence is Sami Ramadani. Sami is a senior lecturer in sociology at London Metropolitan University and was a political refugee from Saddam Hussein’s regime.

Sami, thank you for joining us.

DESVARIEUX: So we’ve been seeing headlines about rising death tolls in Iraq for some time now. Sectarian violence in the country has reached levels last seen between 2006 and 2008, renewing fears that there might be a civil war between Sunnis and Shiites. And that’s basically how the mainstream press has really packaged all of this. Can you just describe for us what groups are really involved in this violence? And what relationship do they have between each other?

RAMADANI: There is a myriad of groups competing for political power in Iraq, and it is an oversimplification to describe these groups as representing the Sunnis and the Shia and the conflicts as mainly between Sunni and Shia, although sometimes these explosions do appear as though it’s a tit-for-tat in terms of explosions in Sunni areas followed by explosion in Shia areas or vice versa.

But in reality, there is a conflict over political power in Iraq between various political groups. These political groups range from having religious allegiances to purely secular-type groupings. But by and large, all these groupings which are involved in the so-called political process that was created following the occupation of Iraq by the U.S.-led forces in 2003–and remember, the U.S. occupation lasted a good nine years or so, direct occupation, and there is a lot of U.S. influence still in the country. But this political process was started by the U.S.-led occupiers. And we are seeing, if you like, the disintegration of that process, because these political forces that the United States relied on to occupy Iraq and to rule it for so long are at loggerheads themselves as to who will be the main political force in charge of the main political centers of power in Iraq. So there is that dimension.

There is also the dimension of a conflict between the Kurdish leaderships, the two main–or three now–political parties in Iraqi Kurdistan and the central government. So there is a conflict of that type that goes on. And that is largely over territory and over who has the rights to exploit the oil resources in Kurdistan.

DESVARIEUX: Sami, this sounds awfully complicated. But can you just unpack for us in greater detail a little bit, like whose interests are being supported by which group?

DESVARIEUX: Okay. But in terms of the interests, financial interests–let’s talk a little bit about that. They must represent different parts of the elite. Is this what we’re seeing happen here?

RAMADANI: They are different parts of the elite. But also coupled with this elitism, or, rather, economic interest groups, there is also a geographically based elitist groups. So these political parties do not enjoy a national base for each one of them. There is a certain geographic division to their concentration of following [incompr.] power. The Kurdish leaders naturally are in Iraqi Kurdistan. The al-Dawa and other sort of southern-based parties are in the South and in Baghdad, so their following is mostly Shia and other secular forces, smaller secular forces. But there are other forces geographically based in western Iraq, and western Iraq and north of Baghdad are mostly Sunni areas. But you have a mix as well, because Baghdad is very mixed, even as deep as the south as Basra–the port of Iraq in the south is also a mixed city. Similarly, in the north you get cities that are mixed religiously, sect-wise, and ethnically. So you have a very complex picture there.

But one element which has increased the levels of violence recently is the increased activity of the so-called Islamic State of Iraq and Syria. This is an al-Qaeda affiliated organization. Al-Qaeda type organizations in Iraq became very active from 2005, 2006 under U.S.-led occupation. And at the time, most Iraqis thought that the U.S. forces were actually turning a blind eye to these forces, because these forces began to target the Shia mosques and centers, markets, popular markets. So it seemed they were a useful tool to divide and rule in Iraq. So this organization is the continuation of these terrorist groups that were described variously as al-Qaeda affiliated groups or al-Qaeda type groups generally resorting to terrorism and explosions in popular markets, etc. This organization has become very active now in Iraq, and it is the same organization which is also active in Syria.

DESVARIEUX: Okay. I was just about to ask you, what connection do they have to Syria?

RAMADANI: Okay. They–in Syria there are two al-Qaeda affiliated organizations, one called al-Nusra Front, and the other is that other one, the Islamic State of Iraq and Syria. The Islamic State of Iraq and Syria wanted to merge with the al-Nusra Front and establish one organization, but their leader, al-Zawahiri, based, rumors have it, either in Pakistan or in modern Afghanistan still, bin Laden’s deputy, he rejected that, and they remain two separate organizations. But they are very active in the areas around Aleppo in northern Syria near the Turkish borders. Turkey did allow them to go through like they allowed many fighters that came from all over the world into Syria backed by NATO, backed by the United States, backed by Saudi Arabia, backed by Qatar, the Gulf states. And they have become the dominant military force amongst the armed opposition in Syria–not the democratic opposition, but the armed opposition. So these two groups are now the most active militarily around areas of Aleppo and even areas near the Iraqi borders and so on. And the Islamic State of Iraq and Syria has been claiming responsibility for most of the explosions in Iraq, including the one in Erbil in Iraqi Kurdistan a couple of weeks ago.

DESVARIEUX: Okay. Let’s focus a little bit more on the influence of the United States in Iraq. And despite an end to U.S. combat operations, ending in 2010, what is really the policy in Iraq right now? Where does the United States fit into this puzzle?

RAMADANI: The United States is in a mess in Iraq. It’s a mess that they created themselves, because they had to rely on forces that did not enjoy very widescale popular support. They started relying on corrupt politicians. Iraq is now one of the most corrupt states in the world. The United States still has the biggest embassy in the world. Some 3,000 full-time officials work in the U.S. embassy in Baghdad. They are still a very important power center. They play the role of the mediator, so-called, between the various political forces.

But the United States, as the CIA, other security-type organizations, U.S.-led, have struck root in Iraqi society because they occupied the place for so long. They spent billions of dollars on certain organizations. They established secret militias; according to The Wall Street Journal, the United States established six–at least six secret militias in Iraq. One of them at some stage was 10,000 fighters strong when they were fighting the resistance in Iraq. So they have left a very, very important, if you like, foothold or certain areas of influence in the country.

And they are involved in the various contradictions. On the one hand, they don’t want the Iraqi government to fall under Iranian influence strongly. On the other, they cannot really achieve that without relying on parties like al-Dawa, who have some friendly relations with Iran. On the other, the other political forces that they might want to rely on, these are supported by Saudi Arabia or Qatar. They cannot really rule the center in Baghdad. And the United States tries to play on these corporate forces. And the United States also relies very heavily on two Kurdish political parties, the Democratic Party of Kurdistan, led by Barzani, and the Patriotic Union of Kurdistan, led by the late Talabani, who died recently. But there is a third force emerging in Kurdistan, but that’s for another day to talk about. But the United States has established these links with all these political forces and played on their contradictions.

DESVARIEUX: Yes. Well, there’s a lot to unpack there, Sami. We’d love to have you back on, and we can discuss further all these greater complexities in Iraq. Thank you so much for joining us.