Petitions with 100,000+ Signatures Call for Snowden’s Passport to be Reinstated

After President Obama announced a proposal to end bulk metadata collection, Snowden supporters call on the government to reinstate his American passport and allow him to seek political asylum without government meddling

After President Obama announced a proposal to end bulk metadata collection, Snowden supporters call on the government to reinstate his American passport and allow him to seek political asylum without government meddling 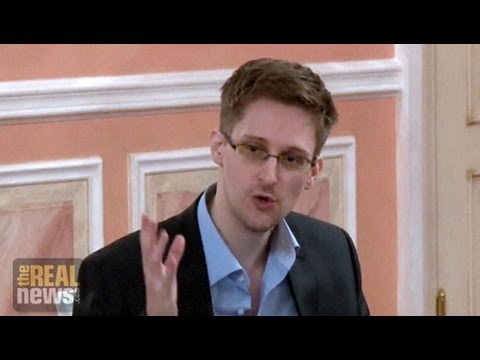 RAY BAKER, TRNN PRODUCER: On March 25, supporters for NSA whistleblower Edward Snowden held a press conference at the National Press Club, calling for a change in the United States government’s stance towards Snowden. They want Snowden’s U.S. passport to be restored and for the government to not intervene in his political asylum process. RootsAction.org cofounder Norman Solomon said that the Obama administration is not only creating roadblocks for Snowden, but it has unfairly tarnished his reputation.

NORMAN SOLOMON, COFOUNDER, ROOTSACTION.ORG: We’re all familiar with the term blaming the messenger. What we’ve seen in the last nine months is a /’m{[email protected]”keISn/ and exacerbation of such a dynamic, denouncing the messenger, vilifying the messenger, taking away the passport of the messenger, and indeed trying to prosecute and imprison the messenger, who since last June has provided the American people with the capacity to learn about what’s being done in our names with our own tax dollars, in fact to participate in the informed consent of the governed.

BAKER: Solomon’s group RootsAction.org sponsored a pair of petitions defending Snowden’s right to his passport and his ability to seek asylum. With a combined total of 100,000 signers, they presented both petitions to the Justice Department and the State Department.

This came right after President Obama announced that he would be curbing the NSA’s ability to collect phone records. Former FBI special agent Coleen Rowley pointed out that such a reform would have only been possible because of Edward Snowden’s revelations. But she said the government has yet to let up on prosecuting Snowden.

COLEEN ROWLEY, FMR. FBI SPECIAL AGENT: Well, you know the old shoot the messenger. Okay. If a person gets the truth out that turns out to be true– didn’t say this in my talk, but a whistleblower test, part of it is it has to turn out to be accurate. If your fears and concerns are ridiculous or silly, that wouldn’t be the case. But if it turns out to be accurate and if the entity that is doing the wrong or the illegal act actually fixes it, how can they turn around now and blame that messenger for telling them the truth that allowed them to fix the problem? It makes no sense whatsoever.

BAKER: But how the White House makes sense of its pursuit of Snowden is by looking at his lack of criticism of other nations.

JAY CARNEY, WHITE HOUSE PRESS SECRETARY: Mr. Snowden’s claim that he is focused on supporting transparency, freedom of the press, and protection of individual rights and democracy is belied by the protectors he has potentially chosen. China, Russia, Ecuador, as we’ve seen. His failure to criticize these regimes suggests that his true motive throughout has been to injure the national security of the United States, not to advance internet freedom and free speech.

BAKER: Former CIA analyst Ray McGovern, who has met with Snowden in Russia, said that Snowden was certainly concerned about the protection of American rights–just look at his actions before the leak.

RAY MCGOVERN, FMR. CIA ANALYST: He had a copy of the U.S. Constitution on his desk. And it was all dogeared. And every now and then he’d whip it out and he’d say, now, is what we’re doing consonant with the Fourth Amendment?

BAKER: Former intelligence officials, researchers, and scholars alike are echoing the call for Edward Snowden to have his passport reinstated. But here on Capitol Hill, members of both the House and Senate are singing a different tune about Mr. Snowden, with some even suggesting he’s a Russian spy.

REP. MIKE ROGERS, CHAIR, HOUSE INTELLIGENCE COMMITTEE: I believe there’s a reason he ended up in the hands, the loving arms of an FSB agent in Moscow. I don’t think that’s a coincidence.

MCGOVERN: The notion that he chose to be in Russia and that Mike Rogers can, you know, imitate Joe McCarthy in saying, oh, we know the Russians, the Russians are behind all this, you know, he didn’t choose to be in Russia. It was only because his passport was withdrawn from him and he became stateless, because John Kerry the Secretary of State decided to do that. That’s why he had to stay in Russia.

And I have to say this, that Putin faced a very difficult decision. Now, in terms of international law, it was easy. Okay? He was due, that is, Edward Snowden was due political asylum. Why was this difficult for Putin? Putin’s an intelligence officer. He grew up in the KGB. You know? He’s the last kind of guy that wants to create a precedent that you can leak all this sensitive stuff and get asylum somewhere.

BAKER: Senate intelligence chair Dianne Feinstein had a change of heart herself upon finding out that her Senate Intelligence Committee was being spied on by the same NSA wiretappings she once defended.

SEN. DIANNE FEINSTEIN, CHAIR SENATE INTELLIGENCE COMMITTEE: What the president has said is that he wanted to maintain the capability of the program, that, as Chairman Rogers said, it has not been abused or misused and it is carried out by very strictly vetted and professional people.

FEINSTEIN: Based on what Director Brennan has informed us, I have grave concerns that the CIA’s search may well have violated the separation of powers principles embodied in the United States Constitution.

ROWLEY: I actually–when I watched Dianne Feinstein, I watched her whole speech. And my memo about 9/11 in 2002, May 2002, I delivered it to Dianne Fienstein. I had it–two envelopes, and they went to the Intelligence Committee. She wasn’t even the chairperson yet. Well, I was a little disappointed over the years that she didn’t become a voice for good government. She actually, with this intelligence committee, became complicit with the NSA and the CIA and the black sites and the torture. And so this moment, where she gave the speech in saying our balance of powers between the executive and the legislative is imperiled now, we have a constitutional crisis, I took heart from that. I said, that’s exactly what we’ve been trying to warn you about.

BAKER: However, Some Americans still believe Edward Snowden betrayed the trust of the United States and endangered the welfare of servicemen and women at home and abroad. But Norman Solomon argued that those who criticize Snowden have not been able to show how he has jeopardized the well-being of American citizens.

SOLOMON: With all the bluster and the rhetoric coming from Capitol Hill and the executive branch, those folks have not been able to point to a single injury to the public interest, to the security of the United States.

What Edward Snowden has done is injure the tissue of lies, the fortification of deceit that have been routine, coming from the Obama administration. The only way we know about the metadata collection program, the mass surveillance, all these hundreds, literally, of revelations we’ve gotten in the last nine months about what’s being done in our names, with our tax dollars, as American citizens, we know about all of it only because of Edward Snowden. And it really takes a lot of gall and Orwellian arrogance for the Obama administration, even after it now is saying it will cut back on the metadata bulk surveillance program, to still pursue Edward Snowden, to still refuse to give him his passport back, to still refuse to promise not to abduct him or grab him and drag him back to the United States. And we know if that would happen that his fate would be similar to Chelsea Manning being thrown in solitary confinement, cut off from the public. That is exactly what the Obama administration wants is to silence the voice of Edward Snowden.

BAKER: This is Ray Baker reporting from Washington for The Real News.