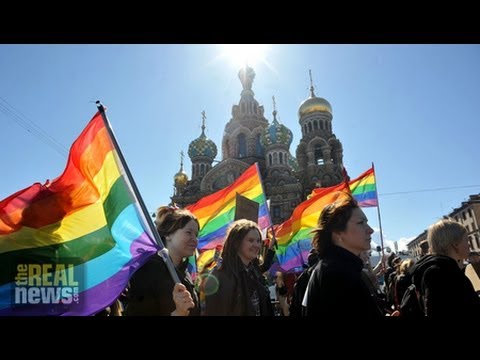 The 2014 Olympic Games are underway in Sochi, Russia. But a hot topic for these games has nothing to do with sports. Human Rights Watch released a video showing brutal harassment of gay Russian men ranging from public humiliation to physical violence. Activists point to the state of anti-LGBT laws, specifically a recent law banning pro-gay, quote, propaganda that could be accessible to minors.

With that, we’re joined by our guest, Slava Mogutin. He’s a New York-based Russian-American artist and writer. He was exiled from Russia for his outspoken writings and activism.

SLAVA MOGUTIN, RUSSIAN-AMERICAN ACTIVIST, ARTIST, AND WRITER: Thank you for having me.

NOOR: So you recently wrote a piece in the Huffington Post. You wrote about how the recent crackdown on gay rights goes hand-in-hand with the general crackdown on human rights. We know you fled your home country. You’re now living in the U.S. What was your personal experience being a gay man in Russia? Were you ever attacked?

MOGUTIN: Well, I don’t think that Russians by nature are any more homophobic than any other nation. When I first came to Moscow as a teenager, I don’t recall experiencing homophobia on a day-to-day basis.

But when I came out publicly and started talking and writing on gay issues and outing prominent Russian personalities, that’s when I got in trouble with the authorities. And I was charged with open and deliberate contempt of the generally accepted norms and inflaming national social and religious division, malicious hooliganism with exceptional cynicism and extreme insolence, and so on and so forth. And this persecution only escalated after my attempt to register officially the first same-sex marriage in Russia, which ultimately led to my exile from Russia a few months later. And I came to New York and asked for political asylum and became the first Russian to be granted asylum on the grounds of homophobic persecution.

NOOR: And so how does Vladimir Putin play into this? Some would argue that the problems occurring today in Russia are not Russian or simply don’t stem from Putin but are a broader cultural problem. People voted Putin into power, and homophobia is rampant. What’s your response?

MOGUTIN: Well, the roots of homophobia in Russia are very deep indeed, and they go back to the time of gulag and Stalin’s suppression. Just to remind you, the first anti-gay law in U.S.S.R. was introduced in 1934. At the same time, a similar law was adopted in Nazi Germany. And even though homosexuality was officially decriminalized in Russia in 1993, it remained on the list of official–of mental illnesses up until 1999.

And, unfortunately, since my exile in ’95, things have gotten much worse. And the recent anti-gay legislation is just another perfect example of the rampant homophobia which goes hand-in-hand with the general political corruption and the rise of the Russian [incompr.] and xenophobia and the crackdown on the basic human rights and freedoms. So, historically homosexuals were used as scapegoats under every dictatorship. And sadly, Putin’s regime was no exception here.

NOOR: And obviously Russia’s facing deep economic and social problems. So homosexuals would make a convenient scapegoat, like, as you mentioned, they have been throughout history.

MOGUTIN: Absolutely. And that’s exactly what’s happening. Basically, Putin is blatantly using this anti-gay card to cement his reputation as a strong man and the father of the nation.

NOOR: And so the Olympics have raised this issue of the persecution of the LGBT community. So activists have used it as a way to elevate that. Talk about what’s being done to address the root causes of these problems.

MOGUTIN: With the Sochi Olympics on everyone’s mind, I feel like we have a perfect chance and opportunity to address the bigotry and hatred promoted by Putin’s regime. And we have to hold Russian government accountable for the rampant rise of gay bashes that is happening all over Russia on a daily basis. And most importantly, I feel like we must keep on putting pressure on the Russian government until these shameful and unjust laws are abolished once and for all. And I feel that Russia is a beautiful, prosperous, and generous country, and its people deserve much better future and much better government, all people, regardless of their gender and sexual orientation.

MOGUTIN: Thank you for having me.

Slava Mogutin is a New York-based Russian-American artist and writer, exiled from Russia for his outspoken writings and activism. He is also a writer and a self-taught journalist who worked as a reporter and editor for the first independent Russian newspapers, publishers, and radio stations, hailed as one of the foremost voices of the post-Perestroika new…