After the Supreme Court partially approved Trump's travel ban, travelers from six mostly Muslim countries who can't prove "bona fide relationships" in the U.S. will be barred--but there will confusion about who makes those decisions, says Shayan Modarres of the National Iranian American Council

After the Supreme Court partially approved Trump's travel ban, travelers from six mostly Muslim countries who can't prove "bona fide relationships" in the U.S. will be barred--but there will confusion about who makes those decisions, says Shayan Modarres of the National Iranian American Council 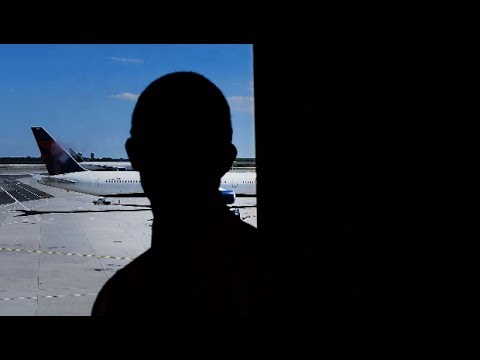 AARON MATE: It’s The Real News. I’m Aaron Mate. President Trump’s travel ban is about to resume. The Supreme Court mostly reinstated it this week pending a final decision in the fall. Starting Thursday, travelers from six, mostly-Muslim countries who can’t prove bona fide relationships in the US will be banned. Refugees will also be barred from entry for a period of three months. The ban sparked protests and confusion at airports across the country earlier this year. Because of ongoing ambiguity in the Supreme Court’s ruling, a new round of lawsuits is expected. Joining me is Sayan Modarres, legal counsel for the National Iranian American Council. Sayan, welcome.

SAYAN MODARRES: Thanks for having me.

AARON MATE: Thank you for joining us. So this travel ban comes back into effect at least partly on Thursday. What can we expect?

SAYAN MODARRES: I think we can expect a lot of confusion similar to what we saw in the wake of the first executive order back in January, so a lot of people are having a lot of confusion about what constitutes a credible, bona fide relationship and what the Supreme Court has done in attempting to carve out certain exceptions to the travel ban, I think what they’ve done is create an administrative nightmare that we are going to see unfold tomorrow at airports across the country where they’ve basically given authority to executive officers to make determinations as to what relationships are credible, bona fide relationships and which are not. So I predict that we’ll see a lot more confusion similar to what we saw in January, a lot more distraught family members of Iranian citizens and American citizens alike, as well as foreign nationals of the other six countries that are named in the ban. So we’ll see a lot of confusion and a lot of heartache I think.

AARON MATE: So if you’re a traveler from this country and say you want to got to tourist site like Disney World. If you can’t prove a bona fide relationship to a person or an entity in the US, you just can’t come in?

SAYAN MODARRES: That’s correct. So what they require now is this new standard of a credible, bona fide relationship that has to be formal, documented, and formed in the ordinary course rather than for the purpose of evading this executive order. The Supreme Court carved out certain examples. One of them was a student admitted to study in the University of Hawaii, a lecturer who was invited to speak before an American audience, those types of instances people would be granted visas. Other than that, you would be prevented from coming to the United States.

AARON MATE: And who is going to be the judge of what constitutes a bona fide relationship? Is it the Embassy in the host countries or is it the immigration officer? Who is it?

SAYAN MODARRES: That’s a good question and I think that goes to the very heart of the Supreme Court’s decision. I think that’s a little bit of what Justice Thomas alluded to in his concurrence/dissent towards the end of the opinion where he also predicted this administrative nightmare because the Supreme Court didn’t really give us much guidance on how these determinations are going to be made, who’s in charge of making these determinations and I predict we’ll see a lot of litigation to kind of get to the bottom of, you know, with some clarity, what these credible bona fide relationships are and who gets to make these decisions.

AARON MATE: Now the bona fide standard also applies to refugees, too, right? So refugees, even if they’re granted a visa, they still have to prove that they have a connection to someone or an institution in the US?

SAYAN MODARRES: Correct, the US individual or entity would have to show that credible, bona fide relationship on behalf of the refugee, correct.

AARON MATE: So if you’re a refugee fleeing persecution somewhere and you’ve even gotten a visa, you cannot come in unless you have some kind of formal link to a person or a group in the US. How do you prove that?

SAYAN MODARRES: That’s another good question. I think we’re going to see a lot of litigation and arguments in the court about what specific forms of proof are needed to show this, “formal, documented and formed in the ordinary course,” to use the Supreme Court’s own words. How is that documented? What does that look like? What forms of evidence are sufficient to show that and what forms of evidence are not sufficient to show that? Who makes those credibility determinations? I predict we’ll see a lot of argument about that in the courts and we’ll watch it play out.

AARON MATE: When this decision or when this travel ban came before lower courts, at least one of the rulings took into account President Trump’s anti-Muslim statements on Twitter and on the campaign trail. The Supreme Court didn’t include that in this decision as far as I understand it but does that mean that they won’t factor it in when they take it up in the fall or do they have to consider what President Trump has said about Muslims in how they evaluate the merits of his travel ban against them?

SAYAN MODARRES: I think they will take it into account once they consider the case in whole. I think they’re very relevant to the discriminatory intent behind this executive order. We’ve seen court after court take them into account and I think legally the Supreme Court is required to take into account the statements that Donald Trump made both as a candidate and as President of the United States. So I predict that the Supreme Court will consider those statements in the future but what was particularly troubling to me was Justice Thomas’s preview towards the end of the opinion where he essentially alluded to the fact that the Supreme Court would likely side with the government’s argument in this case. They essentially gave us a sneak preview of what the Supreme Court’s decision is going to be and I think that should be a great cause for alarm on behalf of all the foreign nationals that are citizens of these countries as well as, you know, Americans in general that I believe the Muslim ban will become official American policy at some point, if you are taking Justice Thomas at his word.

AARON MATE: And can you explain again what about his comments leads you to conclude that?

SAYAN MODARRES: What about Justice Thomas’s comments? Well, towards the end of the opinion he alluded to the fact that there’s an implicit conclusion he called it that the government has made a strong showing that it’s likely to succeed on the merits. Our reading of that opinion by Justice Thomas is that at least three of the Justices, that would be Justice Thomas and Justices Alito and Gorsuch who joined him in this concurrence/dissent. It would lead you to believe that they already have their mind made up as to which way they’re going to rule on this case.

AARON MATE: So in terms of what could happen on the ground tomorrow when the ban resumes, perhaps we’ll see protests again like we saw earlier this year. Can you give us a sense of the legal fight that you think might be playing out from now until the Supreme Court makes its final decision?

SAYAN MODARRES: I suspect you’ll see a lot of documentation, a lot of perhaps litigation potentially if people are wrongfully excluded but I think generally what you’ll see is just a lot of confusion, a lot of confused people both travelers as well as executive officers who are now charged with carrying out this almost impossible task of implementing a policy that was handed down by President Trump and now this new carved exception and standard if you will that has been handed down from the Supreme Court. So I think you’ll see a lot of confusion on both sides. I think you’ll see a lot of attorneys and volunteers on the ground doing everything they can to document instances where this travel ban has been implemented wrongfully and unconstitutionally. I suspect you’ll see a fair amount of litigation as well, similar to what we saw in January.