B'Tselem spokesperson Sarit Michaeli says although Hamas has violated international law by firing on Israeli civilians, this does not give Israel license to kill Gazan civilians

B'Tselem spokesperson Sarit Michaeli says although Hamas has violated international law by firing on Israeli civilians, this does not give Israel license to kill Gazan civilians 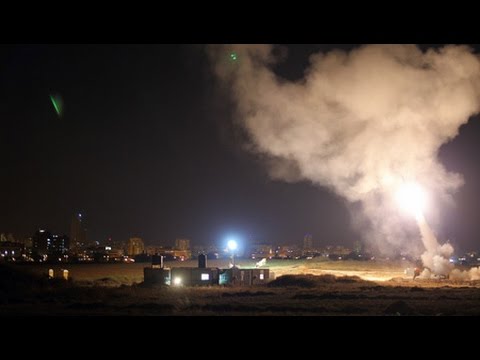 At least 613 Palestinians are now dead, as well as 27 Israeli soldiers and two civilians, on the 15th day of Operation Protective Edge, according to the most recent reports for Reuters. U.S. Secretary of State John Kerry continued to insist on an Egyptian ceasefire that was rejected by Hamas, who says it will only agree to a proposal that includes the lifting of the siege and the release of prisoners rearrested during the West Bank raids ostensibly in search of three Israeli teenagers last month. Israeli Foreign Minister Avigdor Lieberman has said he will seek to use close down Al Jazeera offices in Israel in retaliation for its coverage of Gaza, as gunshots were reportedly fired into its Gaza bureau on Tuesday. And Delta Airlines at U.S. Airways have also temporarily suspended flights to Tel Aviv due to rocket fire from Gaza.

Now joining us to talk about the situation is Sarit Michaeli. She’s a spokesperson for B’Tselem, an Israeli information center for human rights in the occupied territories, based in Jerusalem.

Thanks for joining us, Sarit.

SARIT MICHAELI, SPOKESPERSON, B’TSELEM: It’s a pleasure being with you.

WORONCZUK: So let’s start off by talking about a letter that you sent, along with nine of the human rights organizations, concerning violations of international law in the recent operation against Gaza.

MICHAELI: Yeah. We approached the Israeli government’s attorney general in order to request an immediate cessation to attacks and military actions in the Gaza Strip that we would classify as raising serious concerns for violations of international law humanitarian law, and additionally a demand to set up an external independent investigation mechanism to look at military, Israeli military actions during this operation. Additionally, an additional issue is looking at the decision-making process within the military [inaud.] generals office and into legality of military strikes in the Gaza Strip.

WORONCZUK: Okay. Can you talk about any specific incidents that you documented in that letter?

MICHAELI: Yeah. I mean, there are whole range of incidents in which very large numbers of Palestinian civilians were killed, the many, many women and children a much higher ratio than in any other past conflict. One of the major problems that we’ve identified with the types of assaults, with the types of airstrikes that the Israeli security forces conducted is the attacks against individual homes and dwellings where one of the members, a family or a guest, was considered by the Israeli security forces to be a member of Palestinian armed groups, primarily Hamas, but not purely. And in those cases, we’ve identified a large number of fatalities due to these, effectively, bombings of homes. And there are some examples.

The most recent one was an attack on Sunday evening on the home of the Abu Jama’e family in Khan Yunis, northeast of Khan Younis. Twenty-five members of an individual family were killed. This is the matriarch and four families that were wives, her sons’ wives, effectively. They were all together in one evening. The Israeli army bombed the home, apparently in order to kill a militant Hamas military wing operative who was present at the home, apparently, and was killed as well, but additionally to him, 25 members of the family, including many, many children, very–many of them very young. So this is one example. This is probably the most extreme case of an individual attack that left such a high death toll.

But this is not by far a unique case in this round in Gaza. I mean, the numbers of fatality figures, [across (?)] 600 of them, as we said, many, many children, over 130 children were killed in these attacks. And this type of warfare that involves bombing civilian infrastructure, bombing civilian homes, is the reason behind this letter by the Israeli human rights community to the attorney general, but also to a call that we published, that B’Tselem published, basically calling upon the Israeli government to completely stop, and immediately, any kind of bombing and any attack on populated areas and populated–and homes and streets and neighborhoods in the Gaza Strip.

WORONCZUK: Okay. And there’s also been another incident that has brought international outrage, which was Sunday’s operation in Shuja’iyya. Can you talk about what we know about that?

MICHAELI: Yeah. Unfortunately, we don’t know enough about this incident to make very clear descriptions and pronouncements. Clearly several Israeli members of the Israeli security forces’ /frɪŋ/ soldiers were killed in clashes with Palestinians in the neighborhood. At the time, also dozens of Palestinian civilians who were caught in Shuja’iyya were killed throughout the night, a night of extremely heavy bombardment. It’s unclear, because our fieldworkers can’t even reach the site yet, as to the exact order of events.

But there’s one thing that is clear and is a major cause of concern for us, which is that the Israeli security forces apparently treated the neighborhood of Shuja’iyya as if it had been emptied of its civilian inhabitants as a result of a warning of a call to evacuate that the Israeli army sent out to the residents. Now, this is in itself unacceptable. The Israeli army provided calls to evacuate, but people couldn’t necessarily evacuate. In some cases, we spoke to people who assessed the situation and explained that they felt that it would be too dangerous for them to evacuate, or simply couldn’t because there was nowhere else to go to in Gaza, which is one of the most densely populated areas in the world, and they felt that their safety was not served by leaving their home. Once the bombing and shelling and the artillery started, many people wanted to evacuate their homes but couldn’t, and in some cases there are even reports of people who have tried to leave their homes and were hit, killed, and injured while attempting to evacuate. As I said, the details are still very sketchy, and it could be impossible to make a clear statement. However, it’s very, very important to clarify that the fact that the Israeli army gave these warnings does not render an entire neighborhood a legitimate military target. It’s still a civilian neighborhood.

WORONCZUK: Okay. And are there any documented incident instances thus far of Hamas using civilians as human shields or firing rockets from residential areas?

MICHAELI: Well, it’s, I think, factually very clear that Hamas conducts its hostilities from within populated areas. You simply have to look at the footage of rockets being launched at Israeli targets to see that Hamas fighters are firing them from, sometimes, very, very close to residential buildings. Additionally, to add insult to injury, they’re firing at Israeli civilians. This is, of course, a complete, you know, a clear and grave breach of the provisions of international law that call on distinguishing at all times between civilians and combatants. So, certainly Hamas is firing at Israeli civilians, risking and endangering Palestinian civilians in these neighborhoods.

There there are also claims of individual, of more specific shieldings. I’ve seen claims by members of the Israeli security forces that state Hamas fighters specifically prohibited Palestinians from leaving individual homes and areas. We haven’t got independent confirmation of these claims, because the Israeli security forces, as far as I know, haven’t released any footage yet. However, of course, if this is correct, this is extremely–it’s outrageous behavior.

And certainly there were public claims by Hamas spokespeople calling on Palestinians not to leave these areas and remain in their homes. Again, this would be a major violation of international law.

It’s very important to explain, though, that the fact that Hamas and other Palestinian armed groups in the Gaza Strip are violating the laws of armed conflict does not allow the Israeli security forces in Israel license to violate the laws as well. International humanitarian law is not about tit for tat. It’s about protecting civilians and taking all–not only distinguishing at all times between civilians and combatants, but also taking all feasible precautions in order to avoid harm to civilians. The price, the human cost we’ve seen in the Gaza Strip in the last couple of weeks has been completely horrendous in terms of Palestinian civilian casualties.

I want to thank you for joining us.

MICHAELI: Thank you very much.

Sarit Michaeli is a spokesperson for B’Tselem, an Israeli information center for human rights in the occupied territories based in Jerusalem.

December 31, 2019
Sign Up for Our Newsletter
Help Us Make Real News!