2013: A Deadly Year For Journalists

Four Al-Jazeera journalists remain imprisoned in Egypt, whose US-backed regime is among the most repressive countries suppressing the free press

Four Al-Jazeera journalists remain imprisoned in Egypt, whose US-backed regime is among the most repressive countries suppressing the free press

The Deadliest Place in the World for a Journalist 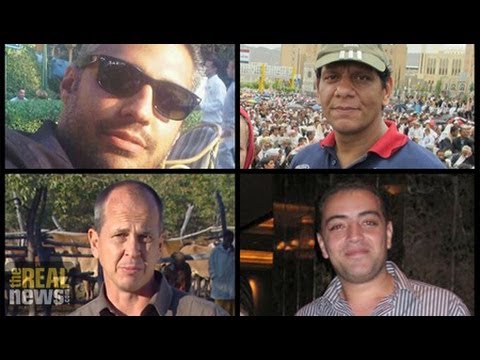 The Committee to Protect Journalists confirms that 70 journalists were killed in 2013 and that that year was the second-worst year on record for the incarceration of journalists.

With us to discuss these reports and the recent arrests in Egypt is Sharif Mansour, the Middle East and North Africa Program coordinator at the Committee to Protect Journalists.

SHARIF MANSOUR, COMMITTEE TO PROTECT JOURNALISTS: Oh, thank you. Thank you for having me.

RIVARA: So I wanted to start off by discussing these recent arrests in Egypt. What is your response to this and also the overall crackdown of press freedoms in Egypt?

MANSOUR: Well, we’ve always spoke out against all the violations and attacks against journalists in Egypt. What happened to the Al Jazeera journalist is just one event of a systematic targeting of journalists, especially those critical of the government and those who are independent who have a difference narrative of the events in Egypt.

We have seen in Egypt unprecedented wave of attacks that started throughout the year with President Morsi and escalated a lot more under the current military-led government. For the first time, Egypt is ranked among the top ten jailers of journalists globally this year. But also it’s number three in terms of deadliest environment for journalists, with six journalists killed throughout the year. So we’re seeing a lot of deterioration in the case of Egypt, and we have documented all those attacks.

We have addressed protest letters to Egyptian authorities. We talked and worked with local partners about addressing the judiciary, and also the prosecutor general, in order to investigate those attacks and release those who are being imprisoned without charges.

RIVARA: And in terms of the report that your organization released on the 70 journalists that were killed, what can you tell us about them in terms of who they were, where they were, what they were doing that led them to being targeted?

MANSOUR: Well, most of those who had been targeted were in the Middle East. Around two-thirds of the journalists killed in 2013 were concentrated in Syria, Iraq, and Egypt. The majority were in Syria, where 28 journalists have been shot, kidnapped, and killed because they were doing their work.

Later, also, in Iraq, during the last quarter of the year, we have seen a return to an era in which journalists were murdered mercilessly in Iraq, who has been the most dangerous country for journalists for ten years under the occupation. But last year it didn’t witness any journalists killing, and in a matter of three months, this year, in 2013, Iraq have seen ten journalists being killed.

Third, and most alarmingly, Egypt, who–since 1992, the Committee to Protect Journalists have documented a total of ten cases of journalists killed, including six who died last year alone, which is a big number if you see the record of Egypt.

Other countries are also–have witnessed a lot of killing for journalists, including Pakistan, Somalia, India, and Brazil, and Philippines. Though this is generally the statistic and the statistic is consistent with what we’ve seen in the recent years, more and more of those journalists are–the majority of whom are local journalists–91 percent of those journalists were local. Also, at least 30 percent of them were freelancers, which is also showing you that those are playing and taking a lot more risks. And in most of times, they don’t get as many attention from the outside world.

And if you specifically talked about Syria, who for the second year have been ranked the deadliest country for journalists, last year and 2012, we’ve document 31 cases of journalists, and this year 28. In Syria specifically, the number of those who are working as a freelancer is even more. It’s around 46 percent. And even more, there is two-thirds of those who have been killed use internet as their main way of publishing information, which means that if we see the impact of lack of coverage and lack of access for professional journalists, the toll is usually–is being paid by local and online and freelance journalists.

RIVARA: Sharif, as you mentioned, it’s not just journalists that are being killed, but also those who are being intimidated and incarcerated. And I was wondering if you could talk a little bit about why that is and why we’re not hearing about as much as you mentioned with more local journalists. How does your organization get the word out?

MANSOUR: Well, we try as much as possible to spread the news. We document those cases is much as possible. And it’s very difficult in many cases to get information out. If you’re talking about a country like Syria, where there isn’t much access for journalists, a lot of what we do is dependent on local individuals, human rights organizations, who can document a lot of those cases and send the information to the outside world.

In other situation, it’s also hard to figure out who’s doing what. If you’re talking about Syria, throughout the year we’ve documented at least 53 cases of kidnapping of journalists. And those who have been kidnapped, in most situation we don’t know who’s kidnapping them and for what reason, and it’s usually a long time before we even receive any confirmation or know of any confirmation that they are alive and what would be the demands of their kidnappers.

So if you talk about a country like Turkey, it’s such an amazement that in the second year, they are the second-worst jailer–they are the first jailers of journalists for two years in a row, 2012 and 2013. And that’s something you don’t hear a lot about, because most people think of Turkey as a democratic state. But that’s not enough in terms of press freedom. As we see from the situation in Turkey, being elected democratically doesn’t mean that you have a tolerance for dissent and that you have a respect for the media.

In other cases, of course, China and Iran, they are–have been–consistently been at the top of the list of imprisoning journalists. And Iran this year, we’ve seen that there is less number of people who’ve been incarcerated. But that’s not necessarily because the government is doing a lot more to improve the record. Many of those people who were released since last year have already spent their sentence or has been released temporarily on a furlough as a part of their revolving door policy.

RIVARA: Well, Sharif Mansour, I wanted to thank you so much for joining us.

MANSOUR: Thank you for having me again.

Sherif Mansour is an Egyptian-American democracy and human rights activist. Before joining CPJ, he worked with Freedom House, in Washington, D.C., where he managed advocacy trainings for activists from the Middle East and North Africa. In 2010, Mansour co-founded the Egyptian Association for Change, a Washington-based nonprofit group that mobilizes Egyptians in the U.S. to…