The FBI and DHS justify the surveillance by claiming Black Lives Matter activists are "black supremacist extremists" prone to violence. But it's really just an attempt to criminalize black protestors and silence the movement, says Stephanie Llanes of the Center for Constitutional Rights

The FBI and DHS justify the surveillance by claiming Black Lives Matter activists are "black supremacist extremists" prone to violence. But it's really just an attempt to criminalize black protestors and silence the movement, says Stephanie Llanes of the Center for Constitutional Rights 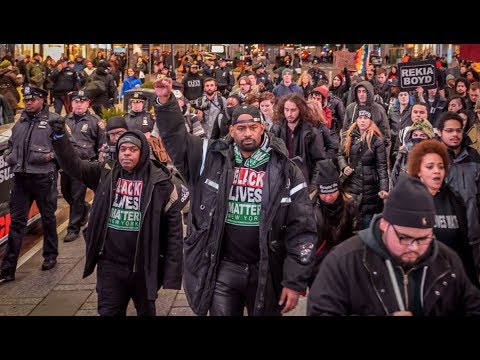 SHARMINI PERIES: It’s The Real News Network. I’m Sharmini Peries, coming to you from Baltimore. Newly released documents obtained by the Center for Constitutional Rights in New York show that the FBI and the Department of Homeland Security have been monitoring the Black Lives Matter movement. The documents were obtained by a Freedom of Information Act request that The Center for Constitutional Rights and the civil rights group, Color for Change, filed last year. According to these documents, the FBI and DHS justify their monitoring activities on the basis of a presumed potential for violence among Black Lives Matter activists.

Joining me now to discuss this issue is Stephanie Llanes. She’s a lawyer with the Center for Constitutional Rights, where she works on the government misconduct and racial injustice docket. Thank you so much for joining us today.

STEPHANIE LLANES: Thank you so much for having me.

SHARMINI PERIES: So Stephanie, give us a brief rundown on the kinds of surveillance and monitoring that the FBI and the Department of Homeland Security have been engaged in with regard to Black Lives Matter.

STEPHANIE LLANES: Yeah. What we’ve seen in reporting from different agencies but also what organizers, activists, and protesters with The Movement for Black Lives have been reporting is that there have been a number of ways in which the government has surveilled the movement, whether it’s through stingrays monitoring cell phones, whether it’s using social media accounts to monitor all forms of protest activity, to really looking through emails and other forms of surveillance in addition to drone footage and in-person surveillance.

SHARMINI PERIES: Stephanie, how do these agencies justify such monitoring, and what is your take on the constitutionality and the legality of such monitoring activity?

STEPHANIE LLANES: Yeah. You touched on it, Sharmini. They’re essentially arguing that there is this presumption of a threat of a violence, and that’s what allows them to supposedly monitor and surveil a number of activities related to The Movement for Black Lives. A number of things have come up in the documents that we have found that show that this actual presumption of threat is not real but they’re trying to conflate and come up with arguments to show that. One is some of the arguments, particularly in an email chain from the FBI where they are kind of summarizing the events that happen as it related to the gunman in Dallas that shot five police officers at a police brutality protest.

In that email, they’re describing the chain of events, they’re describing the identity of the gunman. They explicitly talk about how he was not related to the Movement, and then in the same email, they talk about “black supremacist extremists” as potential threats to law enforcement agencies, and so … as it relates to the movement. Here, we’re seeing the conflation of an event, of a violent event, that had nothing to do with the movement, to then being given this identity as black supremacist extremists as people to be looked for by law-enforcement agencies. There’s no definition as to what that is.

Second, I think what it is doing is that it’s kind of cementing in people’s minds, and particularly in government agents’ minds, is that these are black protesters against police violence that are “inherently violent.” They’re “black supremacist extremists.” I think the other thing that this term does, and this is nothing that’s explicitly in the documents, it’s just a thought, is that it’s really conflating implicitly the terms white supremacist, which does have a movement and a history of violence and murdering of black people, to this newly defined term of “black supremacist extremist” that does not have a history of a movement and certainly does not have a history of violence. So that’s one of the things that we’ve seen in how they are trying to kind of say that there is some threat that’s actually not there.

SHARMINI PERIES: As far as the legality of this is concerned, is there an advantage to the FBI to be doing this kind of work, in terms of the legality of it, if they do label them black extremist?

STEPHANIE LLANES: Right. What we’re arguing is that the surveillance of The Movement for Black Lives, from what we’re seeing in these documents, is that it is unconstitutional because it is protected speech. Of course, if there was in fact an actual violence, a threat of violence actually happening, then that is something that the government could partake in but there’s absolutely nothing in these documents that shows that. What this is actually doing, what the government is actually doing by illegally surveilling The Movement for Black Lives is that it’s strategically doing it to silence and chill the organizing that black people are doing in the face of police violence.

SHARMINI PERIES: Right. Is it having a practical effect in terms of the movement and Black Lives Matter organizers and activists?

STEPHANIE LLANES: You know, I think that’s a question that is probably best suited for our folks on the front lines, for the activists and black folks themselves. But I think that given the fact that Color of Change decided to bring this FOIA because a number of its constituents and members were protesting and were saying that this was happening is absolutely something that shows that there is an effect on the organizing and on the movement. And then separate, I think there’s a history of that, right? We saw that in the 1960s when the government used COINTELPRO to surveil the Black Power Movement, eventually really destroying that movement. I think that as it relates to this particular moment, I think that the fact that we’re even bringing this FOIA shows that folks are feeling the brunt of that illegal surveillance.

SHARMINI PERIES: Right. Now, conservatives and especially Fox News have long tried to portray Black Lives Matter as a violent-prone hate group. Do you think such portrayals are influencing how the government is treating Black Lives Matter? This happened even during the Obama administration.

STEPHANIE LLANES: Absolutely. I mean, I think it kinda feeds off of each other. I can’t say exactly which one influences the other because I think they kind of go in tandem. I think, given the reports that we’re seeing in these email chains … I mean, they’re even using misinformation. The government is using misinformation to kinda further criminalize black protesters.

We have a string of emails from the Department of Homeland Security alerting agencies about a “day of rage” protests across the country. That was later found to be a hoax. They even acknowledge in their emails that that was a hoax. But they informed government agents that if they’re anywhere close to those protests, they could be victims of violence and that there is a sort of mob mentality, mob mentality, that takes over normally decent people. Again, it’s even the use of misinformation by government agents to criminalize black protesters. I think that, unrelated but also related to this, is that it’s a history of just criminalizing black folks, period. When we talk about Fox News using The Movement for Black Lives as a way not only to criminalize the movement itself but it’s also a way to criminalize black people.

SHARMINI PERIES: I think this particular program, COINTELPRO, is what you might have been referring to earlier, back in the ’70s when COINTELPRO was programmed to actually spy on African American activists and falsely criminalize them in order to stop them from organizing. You are too young to, of course, have been a part of it but I’m sure you studied it, so can you make comparisons here?

STEPHANIE LLANES: Yeah, absolutely. I mean, that program was designed by the federal government to “neutralize and destroy the Black Power Movement and activists related to it.” I think what we’re seeing here is that, while we don’t have the word ‘destroy’ as it currently stands in any of these documents, what the illegal surveillance is doing is a counter-tactic to these movements to suppress and chill not just the actual protests themselves but the organizing around it.

I think it’s inherently related, and I think it stems even further back than COINTELPRO. If we go all the way back to the Atlantic slave trade, surveillance itself was a racialized system that was constructed to suppress and surveil black people. There was lantern laws that said that if you were an enslaved African, an indigenous enslaved person, or a mixed-race person walking after dark and you did not have the accompaniment of a white person with you, you had to carry a lantern so you would be lit up and people would see you. I think what this does is that … What we’re seeing is really a mutation through time of continued government surveillance in the supposed name of national security, but really what it’s doing is further criminalizing black movements, black protesters, and black people generally.

SHARMINI PERIES: Right. Does this compare at all in terms of the way in which the FBI and DHS monitor and treat white-supremacist groups?

SHARMINI PERIES: And thank you for joining us here at The Real News Network.

Stephanie Llanes is a movement lawyer at the Center for Constitutional Rights (CCR). Her work at CCR focuses on surveillance, prisoners’ rights, immigration, Puerto Rico justice, and various forms of government misconduct. She is one of the attorneys that has sued the FBI and the Department of Homeland Security for documents related to the surveillance…