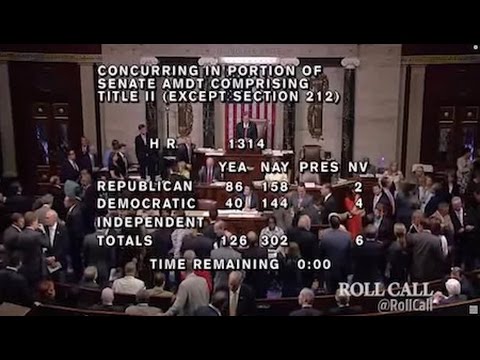 In breaking news, in what’s being called a stunning defeat for President Obama, House Democrats have voted down the President’s signature trade deal. The 126-302 vote against the Trade Adjustment Assistance, or TAA, throws the passage of the entire Trans-Pacific Partnership, or TPP, in jeopardy. A new vote has been scheduled for Tuesday. Critics had argued the entire deal was shrouded in secrecy and, for example, compromised the ability of nations to implement environmental regulations if those regulations conflicted with profits. But is President Obama’s failure a victory for the grassroots movements organizing against the deal, and what other forces are at play?

Now joining us to discuss all of this is Stephan Lefebvre. Stephan is a research assistant at the Center for Economic and Policy Research, or CEPR. Thanks so much for joining us.

STEPHAN LEFEBVRE, RESEARCH ASSISTANT, CEPR: Thank you for having me.

LEFEBVRE: Absolutely, absolutely. So I think it’s definitely a victory as you said for grassroots, and also for the union movement. I think the AFL-CIO helping to coordinate 100 percent of the unions in the country really was really significant.

NOOR: And what other forces are at play here? Because normally if it’s just grassroots movements and even unions that are posing something, that’s not necessarily enough to change the game.

LEFEBVRE: Right. I think that we saw some of those things coming into play with the minority leader Nancy Pelosi. She spoke about her commitment to environmentalism since her first days in office, and I think that that coming from her district in San Francisco was really significant. The Republicans orchestrated this such that they were able to have a select few amendments kind of tucked into another bill using a procedural gimmick, and one of those as you mentioned was a provision saying that this could have no, it would limit the abilities of countries to negotiate climate deals. And I think some of those amendments, things like that really rankled Democratic leadership.

NOOR: And one of the promises made by supporters is that the TPP, it will boost the U.S. economy. It will increase jobs. Now, your organization has actually studied these claims. What have you found?

LEFEBVRE: Yeah. I mean, I think even some people in the opposition would say listen, this might grow our economy slightly, but it’s not worth it because of all these reasons, right, job dislocation and so on. I would say that the predictions for how much it would grow our economy are really a statistical, almost a rounding error. It’s 0.38 percent of GDP by 2025. That’s not an annual, each year we’ll get that increase. After all those years that’s how much we’ll have to show for it. And trade has unequalizing effects. So those gains will go towards the top and a little bit towards the very, very bottom. Which means that the average American, the average worker, will not benefit.

NOOR: And so another vote on this is scheduled for Tuesday. What can we expect to happen between now and Tuesday, and what kind of pressure will the President and other supporters be placing on the Democrats that voted against this?

NOOR: We want to thank you so much for joining us.

LEFEBVRE: Absolutely. Thank you for having me.

NOOR: And thank you for joining us at The Real News Network.

Stephan Lefebvre is a Research Assistant at the Center for Economic and Policy Research. He graduated with a B.A. in Economics from Swarthmore College. His research interests include macroeconomic policy in Latin America and the Caribbean, heterodox economics and transnational feminist theory. Previously, he served as a research assistant at the Inter-American Development Bank.