Sonali Kolhatkar, co-author of the book, Bleeding Afghanistan: Washington, Warlords, and the Propaganda of Silence says the new President in Afghanistans' approach to governing depends on US protection of his presidency

Sonali Kolhatkar, co-author of the book, Bleeding Afghanistan: Washington, Warlords, and the Propaganda of Silence says the new President in Afghanistans' approach to governing depends on US protection of his presidency 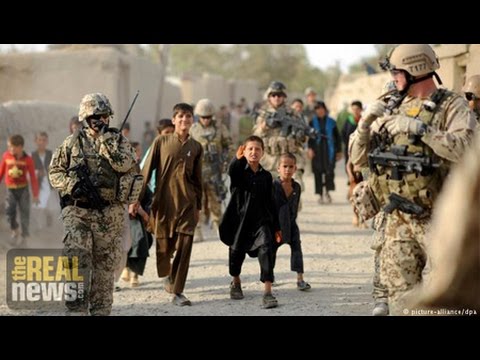 According to the United Nations Assistance Mission in Afghanistan, UNAMA, 2014 was the deadliest year for Afghan civilians since the organization began keeping records in 2009. Over 3,000 civilians were killed this year, in 2014. It was also reported that Afghan forces trained by the U.S. killed over two dozen people at a wedding party on New Year’s Eve.

Now joining us to analyze the situation is Sonali Kolhatkar. She is a founding director for the U.S.-based solidarity organization Afghan Women’s Mission. She is coauthor of the book Bleeding Afghanistan: Washington, Warlords, and the Propaganda of Silence. She is the executive producer and host of Uprising, heard on KPFK Pacifica Radio and Free Speech TV.

Sonali, the U.S. has quietly extended its mission in Afghanistan. They were supposed to have withdrawn by 31 December. Is this because of the war on ISIS?

SONALI KOLHATKAR, CODIRECTOR, AFGHAN WOMEN’S MISSION: Well, of course, we have no way of knowing exactly what the president and his advisers have done in their approach to Afghanistan, what their line of thinking exactly is, but it’s fairly obvious now that with the rise of this new threat in northern Iraq and Syria, the Islamic State, President Obama is worried about appearing soft on terrorism, soft on the war in Afghanistan, and has, it seems, extended the scope of the mission of the remaining 10,000 or so troops in Afghanistan for the remainder of the time there. The troops have already drawn down to a small number, which is 10,000. And then, by the end of this year, there are to be 5,000 troops remaining.

What has changed–and this was done very quietly in November–was that President Obama essentially issued a directive that the troops wouldn’t simply be assisting in advising Afghan military and troops as was originally planned, but that if they were to encounter members of the Taliban or al-Qaeda, that they would engage with them and fight them and, sort of casting in this aura of self-defense, that they would still continue or be able to continue combat operations. What that does is, of course, it leaves the door [open] to extending the war in general. There was some distinction made between the Taliban and al-Qaeda and being able to go more aggressively against al-Qaeda. How the U.S. troops are meant to distinguish between soldiers who don’t wear uniforms is bizarre. Of course, al-Qaeda tend to be non-Afghan.

But, still, this is an army that is fluid. This is a force that has very loosely defined borders. And all that the U.S.’s wars have shown over the past more than decade or so is that its current approach doesn’t work. Bombing and raids do not work. They’ve only strengthen the Taliban. So I’m not sure how this extension is actually going to make anything better.

President Obama’s approach to this war, where we have a war that has been proven–the U.S.’s longest war has been proven not to have worked using the approach of bombing and raids, etc., has only served to strengthen the Taliban, extending this war. Even with a smaller number of troops, we know it’s also not going to work. So it’s not very clear why this approach has been taken other than to simply show that President Obama’s being tough on terrorism.

PERIES: [The] new president of Afghanistan, Ashrsaf Ghani, recently said on a 60 Minutes interview with Lara Logan that they were willing to extend, or at least re-examine, the withdrawal deadline. Why and how has this come about?

KOLHATKAR: Yeah, that’s very interesting. President Ashraf Ghani, who has been cast as this moderate and even sometimes progressive technocrat–there’s an interesting defense of Ashraf Ghani by Ralph Nader, if your viewers want to find it online, casting him as–because he is a Western-educated technocrat–as somebody who would be possibly the best hope for Afghanistan. He has proven to be a shill for U.S. interests. Even President Hamid Karzai, who was widely considered by Afghans as a U.S. puppet, at least made a show of having some semblance of opposition to the United States’s policies because he realized how unpopular the war was. Ashraf Ghani, in his request for the U.S. to extend the small number of troops and to extend their timetable for withdrawal, has only proven that his approach to this war in Afghanistan is based on one thing alone, which is the U.S. protection of his presidency. That’s all that U.S. troops have really been doing in Afghanistan. They’ve not been able to protect ordinary Afghans. They’ve simply protected the corrupt government. And so it’s actually not much of a surprise to me that Ashraf Ghani would do this. Right from the start he surrounded himself by warlords, who have had just a tremendous and a very, very poor record on human rights abuses.

PERIES: [incompr.] Sonali. And this UN report that was just released indicated that there were 3,000 civilians killed by Afghan forces or in wars. Can you explain what these numbers mean for us?

KOLHATKAR: Well, there are a number of skirmishes, clashes ongoing tensions throughout the country in Afghanistan. And it really varies region from region. Afghanistan is extremely nonhomogeneous. What happens in Kabul and Herat and other city centers is very different from what happens in rural provinces. The economy in these areas is different from one another. The setup is different. The ethnic groups that are in power and are parts of the ordinary population are different.

However, there’s just been a lot of violence in the countryside in particular. You have seen a lot of violence among Taliban in terms of brazen attacks on open-air marketplaces. And, of course, you’ve seen pushback and killings from Afghanistan’s armed forces themselves. There have been attacks against girls schools. And this is been a trend that is just got worse and worse. So what’s been really interesting to see is, as the U.S. war has continued in Afghanistan, violence has continued to ebb and flow, but overall continued to increase. Some years it’s been greater, some years it’s been lesser. With the U.S. troop withdrawal, the Taliban are going to look to take as much advantage as they can and increase violence. That’s not to say that that’s a reason for the U.S. to continue, because the U.S. actions have only served to motivate the Taliban in justifying their presence.

PERIES: Right. And what is the impact of all of this on day-to-day living and on civilians?

KOLHATKAR: Of course, again, it depends where you live. So if you live in Kabul, if you live in a big city, particularly if you come from a middle-class or upper middle-class background in Afghanistan, your life is relatively better than it was, than before the U.S. came in, than it was under the Taliban. But for poor Afghans, which is the vast majority of Afghans, even in cities, but especially in rural areas, life is not very different than it was under the Taliban.

Even though there no longer official edicts preventing Afghan women from getting access to education and jobs, the fact is there is no access to education and jobs. They just–it’s an impoverished country. If you look at indicators such as maternal mortality and infant mortality, joblessness, homelessness, literacy rates, Afghanistan still remains one of the worst countries in the world, competing only with Sub-Saharan Africa on the UN’s list of human development indices. So very little has actually changed for women and children and ordinary Afghans in practical terms.

For those who live in villages that have been the target of U.S. troops, they have the added burden of U.S. soldiers coming in in the dead of night and kicking down their doors, rounding up their husbands and their brothers and their sons, and disappearing them into detention centers, and also being subject to both the Taliban and the Afghan National Army.

So for ordinary Afghans, the last decade and a half has been a nightmare.

PERIES: Right. Sonali, I want to thank you for joining us and giving us that update. And we’ll be back to you very soon.

KOLHATKAR: Thank you so much.