Deficit Is Falling Because Of Government Austerity, Not Economic Recovery 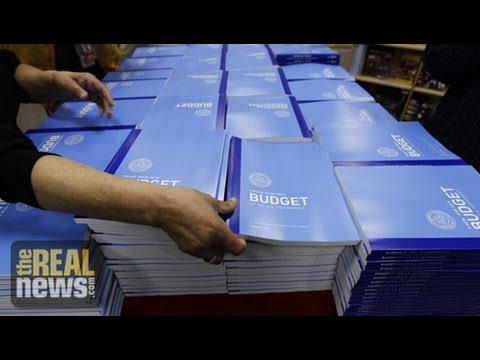 The federal budget deficit is projected to shrink to $514 billion in 2014, according to the Congressional Budget Office. That’s half the $1.4 trillion deficit that the U.S. had in 2009. President Obama has boasted that deficits are falling faster now than during any time in the past 60 years.

Now joining us to discuss the deficit is Stephanie Kelton. She’s an associate professor and chair of the Department of Economics at the University of Missouri-Kansas City. She’s also the editor-in-chief of the top-ranked blog New Economic Perspectives.

Thank you for joining us, Stephanie.

DESVARIEUX: So, Stephanie, I know that you’ve written extensively about the dangers of obsessing over the deficit. But just first of all, what actually is the deficit?

KELTON: Well, the deficit is the difference between how much the government is spending into the economy relative to how much it’s taking out, mainly by taxing us.

KELTON: Well, the deficit has been falling, as you mentioned, at its fastest clip since the end of World War II, and it’s actually been falling at a pretty rapid clip for quite a long time now. The deficit actually started falling rapidly right around the end of 2012. This is before the fiscal cliff deal and before the sequester and all of that sort of thing. So the deficit was falling then primarily because the economy was recovering.

And so, you know, the government was spending a lot when the economy went into the recession after the Great Recession, and the deficit exploded because lots and lots of people lost their jobs. You remember, we were at one point losing close to 800,000 jobs a month in this country. And so, when people lose their jobs, their income goes to zero, and so they aren’t paying income taxes. And now all of a sudden they qualify for all sorts of government programs, whether it’s food stamps, unemployment compensation, you know, Medicaid. All kinds of government spending goes up to support the unemployed.

And when the economy began to recover from the Great Recession, people started to find work. And when they found work, they had an income. And when they had an income, they paid taxes. And then they no longer qualified for unemployment compensation, they didn’t qualify for food stamps and Medicaid. So spending to support the unemployed went down and taxes went up. And that’s what happens when the economy is healing. And when you get an economic boom, the deficit does tend to come down. And so we were seeing that happen.

DESVARIEUX: So, Stephanie, I know you have written extensively about how we shouldn’t obsess over the deficit, but there are many progressive economists that say we should. They say that maybe not in the immediate future we should be thinking about debt, but in the long term we should be thinking about debt, as well as deficits. What is your counterargument against that? Why do you say that we shouldn’t be focused on that?

KELTON: Well, mainly because if you think about the rationale, if the rationale is that the U.S. government is at some future date, you know, whether it’s ten years or 15 or 25 years from now, going to find itself in a situation where it has a debt problem–and by debt problem [incompr.] you know, you have debts that you can’t pay–well, then we know that that’s just a silly thing to be worried about if you’re the United States of America, because the U.S. government borrows in dollars and has a monopoly on the creation of the U.S. dollar. Nobody else on the planet can legally create U.S. dollars. Only the U.S. government can do that.

And so if you’re talking about whether you can afford to make good on promises that you’ve made to the elderly, to dependants, to the disabled in the form of Social Security support, you would never say we need to reform these programs today because somewhere down the road we’re not going to be able to mail the checks to the seniors and the disabled that we promised, because we won’t know where to get dollars. That doesn’t make any sense. And Alan Greenspan has said as much.

So I think what happened is that we watched what happened in places like Greece, and we bought into the story that, you know, if somehow we don’t get our fiscal house in order–we need to behave like a household, tighten our belts, and all that sort of stuff–we’re going to end up like Greece.

And so I don’t see a long-term deficit problem, I don’t see a long-term debt problem, in terms of the government’s ability to make these payments. The only problem that you have in the future is if you’ve got an economy that is not productive enough, that making those payments as promised in the case of Social Security would leave you with, you know, too much money chasing too few goods, that you don’t have a productive economy and you get an inflationary problem. That’s the real risk that we legitimately can worry about.

And I think if we’re worried about taking care of seniors in the future, there are a whole lot of things we can be doing today to make sure that we’re going to be the kind of productive economy in the future when those payments come due that allow us to take care of seniors in a way that makes us proud to call ourselves Americans and we don’t have to deal with inflationary problems somewhere down the road.

DESVARIEUX: Alright. Stephanie Kelton, thank you so much for joining us.

KELTON: Thanks for having me.

Stephanie Kelton, Ph.D. is Associate Professor and Chair of the Department of Economics at the University of Missouri-Kansas City. She is also Editor-in-Chief of the top-ranked blog New Economic Perspectives and a member of the TopWonks network of the nation’s best thinkers. Her book, The State, The Market and The Euro (2001) predicted the debt crisis in the Eurozone, and her…