Investigative Journalist Stephen Janis looks at the implications of the failure of a majority of laws aimed at police reform in Annapolis.

Investigative Journalist Stephen Janis looks at the implications of the failure of a majority of laws aimed at police reform in Annapolis. 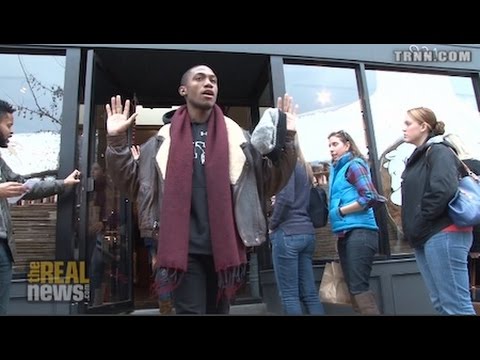 STEPHEN JANIS, PRODUCER, TRNN: It was supposed to be the year of police reform in Maryland. Events across the country, including Ferguson, Missouri, and here at home appeared to present the right coalescence of timing and public interest to tackle a subject that on the surface appears a natural fit for the state that touts itself as decidedly liberal.

But then reality descended in Annapolis. And now the prospect for change seems remote. All the measures aimed at holding police accountable, from an overhaul to the Law Enforcement Officers’ Bill of Rights to a series of proposals to make it easier to fire police convicted of crimes have died without a vote.

It’s a troubling development for advocates who hoped this would be the year of change. One of them, Dayvon Love, policy director for the Leaders of a Beautiful Struggle, says the roadblocks to reform in the state are daunting.

DAYVON LOVE, POLICY DIR. LEADERS OF A BEAUTIFUL STRUGGLE: So to me it’s demonstrative of the fact that black lives don’t matter here in the state of Maryland.

JANIS: But it appears efforts to hold police accountable might actually be getting more difficult, not less.

Last week, the Maryland Court of Appeals struck down an $11.5 million verdict award to the family of Manuel Espina, who was unarmed when he was shot and killed by police in 2008. Even though a Prince George’s County jury found the officer acted with malice when he shot Espina, the high court ruled in favor of the so-called municipal caps, which limit damages against municipalities to $200,000 per person.

JANIS: He too is challenging a similar case of police misconduct. His client was 15 years old when city police took him from his West Baltimore neighborhood and dropped him off in Howard County, shoeless. Pettit sued, and prevailed during a jury trial. But this time the city has simply refused to pay.

His concern, cities have too little incentive to weed out bad cops if verdicts are set aside or capped.

JANIS: The trends in Maryland seem at odds with national sentiment to address aggressive policing, particularly in minority communities. The city of Los Angeles recently empaneled a citizen oversight board to watch its’ scandal-plagued sheriff’s department. And in 2014 Wisconsin enacted a law that requires investigations of police shootings to be conducted by an outside agency.

But here in Maryland, advocates for police say reform is not necessary.

VINCE CANALES, PRESIDENT, MARYLAND FOP: What I find funny about the law enforcement officers’ bill of rights is from a rank and file standpoint, and a management standpoint, on both sides of that equation we both feel that the process works.

JANIS: Earlier this year, we caught up with Vince Canales, the president of the Maryland Police Union, which represents officers who work in departments across the state. He says police departments already have the tools they need to keep officers in line.

CANALES: And I think once people understand that there are a number of levels of review in this process, I think that they’ll under — I believe, then, some of the issues and concerns that do exist will be removed.

JANIS: For Love, he’s already planning to mount new efforts next year. His hope, that the state which allegedly one of the most liberal actually acts the part.

LOVE: The biggest impediment has been the rhetoric around people who are interested in police reform being anti-law enforcement. And so a part of what we’re going to try to do over the next year is to help fight back against that mythology around this whole anti-law enforcement mantra.