TRNN speaks to school administrators and elected officials who are outraged at the $130 million school deficit and potential layoff of 1,000 workers

TRNN speaks to school administrators and elected officials who are outraged at the $130 million school deficit and potential layoff of 1,000 workers 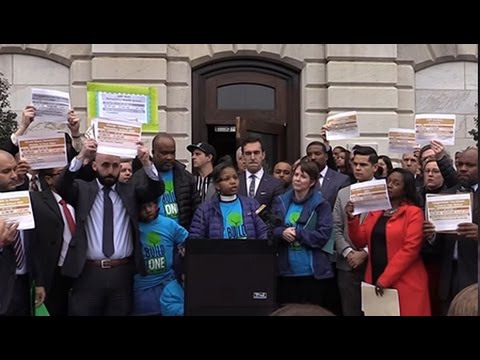 CRAIG RIVERS: Our presence here today is to show our solidarity as school leaders, and for our youth of Baltimore City.

STEPHEN JANIS: They gathered outside City Hall this week, to show their anger over the precarious Baltimore school budget. A group not often inclined to demonstrations, but now within an earshot of Mayor Catherine Pugh’s office, demanding that someone fill a $129 million dollar budget deficit.

ASHLEY COOK-PLYMOUTH: The current budget season has brought with it a particularly extreme level of angst, and has a potential to make negative, lasting impacts on our students’ lives.

STEPHEN JANIS: Roughly 50 principals of Baltimore City schools airing publicly, the implications of the across-the-board 20% cuts to their budgets. The protest was at times emotional.

STEPHEN JANIS: But also different than in past public displays of dissatisfaction with school funding, that’s because there is an awareness that shortchanging education in Baltimore is not just about the fiscal ills of the city, but a result of stark choices made over decades. Among them, consistently funding police at twice the rate of education. And major tax breaks given to developers over the years, including a recent $600 million subsidy to Under Armour owner, and billionaire, Kevin Plank, to build at Port Covington.

ZEKE COHEN: Last week I sat down with a group of students from Patterson High School, and showed them a copy of a past city budget. And one young woman looked up and said, “Councilman, I don’t believe this. Is it really true that you all spend almost twice as much on police, as on our schools?” And I said, “Yes.” And she said, “Councilman, the message this budget sends, is that you all are more interested in incarcerating me, than in educating me.”

STEPHEN JANIS: Which is why, when hundreds of students gathered last week in Annapolis, they aired the same concerns.

RACHEL PONTIAS: …that should be the number one priority of funding in Baltimore, is education, because if we don’t educate our kids, some of them will end up in jail. The school-to-prison pipeline is happening. The only thing they have to get ahead is education

STEPHEN JANIS: But the time had come to invest in them, and by extension, the future. This is Stephen Janis and Taya Graham, reporting for The Real News Network in Baltimore, Maryland.