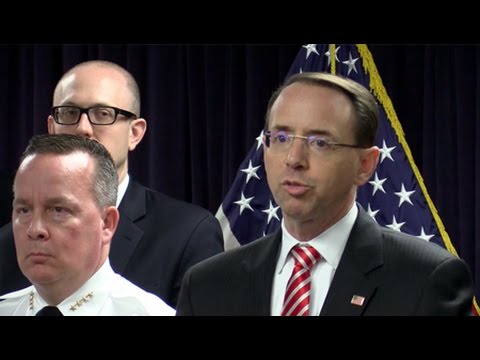 STEPHEN JANIS: This is Stephen Janis reporting for The Real News Network in Baltimore City, Maryland.

ROD ROSENSTEIN: I think an important point to make here is that, this kind of conduct by police officers, tarnishes the reputation of all police officers.

STEPHEN JANIS: For a department already the subject to a scathing report from the Department of Justice, it was another black eye. Seven Baltimore City police officers accused of robbery, racketeering, drug dealing, and overtime fraud. Illegal activity so brazen, U.S. Attorney Rod Rosenstein says the officers, part of a gun taskforce, were running a veritable criminal organization inside the Baltimore City Police Department.

ROD ROSENSTEIN: The seven defendants were members of the Gun-Trace Taskforce, of the Baltimore City Police Department, and during the course of their membership in that taskforce, they conspired to engage in a racketeering conspiracy. The crimes included: robbery of victims, overtime fraud, filing of false police reports, and a variety of other illegal activities.

STEPHEN JANIS: The charges are numerous and troubling. Officers stealing money from citizens, who hadn’t committed a crime, including one case of $200,000, filing false reports, extorting from innocent civilians.

They’re even charged with targeting residents who had money, and illegally entering their homes to steal it. Other charges including conspiring to deal drugs, with a kingpin that led to overdose deaths in the city, and stealing overtime, which led several of the officers to double their salaries, with fake time slips. It was what U.S. Attorney Rod Rosenstein called, a stunning criminal conspiracy.

ROD ROSENSTEIN: And what you see, is a lack of respect for the system, particularly in these discussions about overtime, when the Sergeant is away on vacation, and the officers are allegedly at casinos, and various other places, billing overtime.

There’s a reference in the indictment to an allegation that one of the defendants mentions, that working for the police department is easy money. I can assure you that, for the officers who are doing their legitimate jobs in Baltimore City, this is not easy money by any means.

KEVIN DAVIS: And part of the reality of reform, is looking within our organization, and pulling the covers back, and seeing who is betraying the trust of our community. And these seven police officers acted disgracefully, they betrayed the trust that we have, and we’re trying to build upon, with our community, at a very sensitive time in our city’s history.

STEPHEN JANIS: He also struggled to justify that nearly $40 million in overtime police had racked up this year; even while city schools are facing massive cuts.

STEPHEN JANIS: The department just ran a $40 million overtime bill, and these officers are saying, I didn’t mean to steal it… are we gonna look at some of that? ‘Cause that’s a huge amount of money and it’s possible isn’t it that fraud … overtime … missing in the budget.

KEVIN DAVIS: Yeah well, Stephen, there’s many jaw-dropping allegations that are included in the indictment. And for the average Baltimorean, we know that our city is challenged with revenue sources, and we have many competing interests. Not only within our own public safety community, but throughout the city, education, etcetera.

The allegations of time and attendance, and overtime fraud, and overtime abuse, it’s disgusting. And to take money out of tax-payers wallets — and that’s exactly what they did — and do it so arrogantly, represents a pattern or practice, that undoubtedly has existed within this organization for many, many years.

STEPHEN JANIS: For his part, Davis says this is all part of a long and painful reform process. Meanwhile Rosenstein says the DOJ will continue to hold police accountable, despite recent comments by his boss, Jeff Sessions, to the contrary. Who said last week the DOJ was going to relax efforts to investigate law enforcement agencies going forward. Jeff Sessions recently said he wants to pull back on investigating police departments.

ROD ROSENSTEIN: I don’t think that’s exactly what the Attorney General said, or what he meant, in that I can tell you, that I know the Attorney General’s committed to prosecuting criminals, whether they’re in police organizations, or any place else. So, I’m confident we have his support.

STEPHEN JANIS: This is Stephen reporting for The Real News Network in Baltimore City, Maryland.