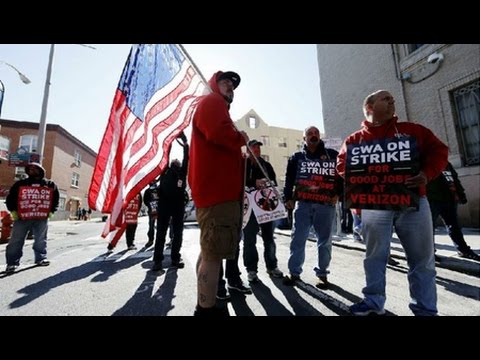 Verizon registered $39 billion in profits in 2012, but on Wednesday nearly 40,000 Verizon workers walked off the job after the company and two labor unions failed to reach a new agreement. Verizon workers are resisting attacks on their job security, medical benefits, pensions, disability, and overtime compensation. This is one of the largest strikes in the country in recent years. Let’s have a look at one of the workers on the picket lines.

SPEAKER: Trying to keep the company from taking back things that we’ve rightfully gained through previous contracts that we’ve fought for, that should be ours. You know, medical benefits, the right to work–.

PERIES: Joining us now to discuss all of this is Sarah Jaffe. Sarah is a reporting fellow at the Nation Institute, and co-host of Dissent magazine’s Belabored podcast. Sarah, thank you so much for joining us today.

SARAH JAFFE: Thank you for having me.

PERIES: So, Sarah, this walkout is about what? What are the sticking points and what caused the walkout?

JAFFE: So this strike is coming after some nine or ten months of negotiations after the contract has expired. The last time that there were major contract negotiations at Verizon there was also a strike, back in 2011, which people may remember because it came right before Occupy Wall Street kicked off in New York.

So the issues are still the same. The issues are still that Verizon, which as you mentioned is a massively profitable enterprise, wants the workers to give back things like on parts of their pensions, parts of their healthcare benefits. They want them to pick up more of their healthcare costs. This is a very, very common issue for workers who are lucky enough to have union contracts at all lately, is that of course the boss keeps saying that your health insurance is too expensive and we need you to pay for more of it. So we see this from the Chicago teachers union strike to Verizon, to all over the place.

And so what’s happening here is the same thing that happened in 2011, it’s the same thing that’s happening again all over the place. And the workers are, you know, it’s–. I just sort of have to say this over and over again, right, that the workers are fighting something that they, as the worker you spoke to said, these are things that they fought for, these are things that they won, and the company wants them to give it back.

PERIES: Now, Verizon is trying to change the rules that would allow it to facilitate outsourcing work, which is causing a lot of tension between the unions and Verizon. Can you speak to that specifically?

JAFFE: Yeah. In particular they want to outsource more call centers, which they already do several of. They send them mostly to the South, where the wages are lower, the workers don’t have union protection, and these are subcontracted out. And again, this is a really common situation that we’re seeing more and more around the country, around the world, really, that companies are contracting out as much work as they possibly can to a subcontractor for whom they claim they are not responsible for the labor practices. This is obviously a thing that the unionized workers don’t want to have happen. They want these jobs to be in-house, they want these jobs to be part of the union. They want these jobs to be good jobs.

PERIES: Now, I understand from reports today that the Fight for $15 campaign is also joining the Verizon workers. And together this is an incredible force across the country. Can you speak to what advancements there has been in terms of the Fight for $15, and the combination or the collaboration between the two campaigns?

JAFFE: Yeah, so I mentioned before that the Verizon strike in 2011 came right before Occupy Wall Street kicked off. And that was really, you know, that was the beginning of what we’ve seen flower into, I didn’t want to quite say a strike wave or the return of the strike entirely, because strike numbers are still way down and have been since, you know, Reagan broke the air traffic controllers union in the early ‘80s. But what we are seeing is sort of renewed working-class rebellion, and so it’s not surprising that especially in a city like New York, where there’s a lot of connection between these unions, they work together closely, they support one another, they show up at each others’ picket lines, that today on the lines the workers will be expressing their solidarity with one another, and linking their fights.

And especially I want to mention, because this is the first time that Verizon Wireless workers, who work in Wireless retail stores, are joining the strike. There’s just a couple of Wireless outlets that are unionized at all. And so those workers are in a very similar position to a lot of workers in the Fight for $15, right. They’re in a retail store, they make low wages, they’re not–they’re what is considered, quote, unskilled work, which as anybody who’s ever done customer service knows there’s a lot of skills involved. And so for those workers in particular it’s very, it’s a very similar struggle to what the Fight for $15 workers are going through.

PERIES: Now, today’s the big debate in New York between the two Democratic candidates, Hillary Clinton and Bernie Sanders. They have also been on the picket lines with the Verizon workers. Let’s have a look.

HILLARY CLINTON: I think that workers, employees, need more support to get the kind of raises and benefits–.

BERNIE SANDERS: [Inaud.] outsource decent-paying jobs. They want to give their CEO $20 million a year in [compensation]. You have chosen to stand up for dignity, for justice, and to take on an enormously powerful special interest. So on behalf of every worker in America who is facing the same kind of pressure, thank you for what you’re doing. We’re going to win this thing. Thank you.

PERIES: Now, the New York primary is on Tuesday, and of course you can see that Sanders and Clinton are both vying for the support of the workers on strike. Give us a sense of which candidate has a better position when it comes to labor union and supporting the workers that are on strike?

JAFFE: I was just joking with a friend of mine who once upon a time owned ObamaGetYourShoes.com, because in 2008 Barack Obama also pledged that he would walk the picket lines with any workers who were having their rights attacked during his presidency. And we have not seen Barack Obama on any picket lines. And so, you know, I am always skeptical of the presidential candidates who turn up on the picket line, or even mayoral candidates or city council candidates, or anybody else, who turn up when it’s time to ask for votes and don’t turn out much once they’ve been elected.

That said, CWA is one of the biggest unions to endorse Bernie Sanders. Most of labor has gone with Hillary Clinton. And Larry Cohen, who was the former president of the CWA, is an advisor to Sanders on labor issues. Sanders has spent a lot of time out with Verizon workers who have been, as I said earlier, fighting for this contract for the last nine months. So there’s a longstanding relationship, particularly between Bernie Sanders and the Communications Workers Union, that I think they actually do have a relationship that goes beyond showing up two days before the New York primary.

PERIES: One sticky point in the campaign, as well as in terms of the actions going on across the country right now, is the $15 minimum wage that has been adopted by California as well as the city of New York. Now, does this $15 minimum wage policy that is going into effect adequately address the needs of workers? That’s the big question.

JAFFE: Oh, of course not. I mean, the, you know, the first demand when the Fight for $15 workers went out on their first strike in November of 2012 was $15 and a union. Just raising the wages is not enough. Obviously as we’re seeing here, even having a union contract is not enough, because the companies are constantly going to try to get you to give back what you’ve won.

You know, when we’re talking about New York City, I was also at a protest yesterday around housing in New York City, and around affordable housing, which, you know, they’re measuring affordable housing at something like $45,000 a year, and that’s a bit more than $15 an hour that you would need to make just to qualify for what is supposedly, you know, affordable housing. And so, you know, $15 an hour is a minimum. It’s notable that Hillary Clinton sort of hasn’t endorsed $15 an hour, although she has said repeatedly that she supports the Fight for $15. She has called for a $12 an hour minimum wage nationally, which is, again, depending on where you are these wages ended up being something very different. But–.

PERIES: Yeah, $15 an hour is simply $30,000 annually. It doesn’t even probably go far enough in terms of paying for an apartment in a place like New York.

JAFFE: And it certainly goes further in some places than others. But you know, when we’re talking about $15 an hour, this is a minimum. And it’s a decent minimum wage but it’s not, you know, and it’s important to note that 47 percent of workers or something like that make less than $15 an hour. This is a huge issue that affects a lot of people, and it is, we’re talking about getting them up to a minimum that would still have you in most places kind of scraping by.

PERIES: And even in places where this has been adopted it doesn’t go into effect for a few years. And by the time workers get to that level the cost of living increases and others have to be factored in here as well.

Sarah, I thank you so much for joining us today. This is obviously an ongoing discussion, and we hope you join us again.

JAFFE: Thank you so much.

Sarah Jaffe is a staff writer at In These Times and the co-host of Dissent magazine’s “Belabored” podcast. Her writings on labor, social movements, gender, media and student debt have been published in The Atlantic, The Nation, The American Prospect, AlterNet and many other publications, and she is a regular commentator for radio and television.