Sahar Issa: In spite of growing oil revenues most Iraqis live without water, power and housing

Sahar Issa: In spite of growing oil revenues most Iraqis live without water, power and housing

Arab League Meets in Iraq with Divisions Over Syria 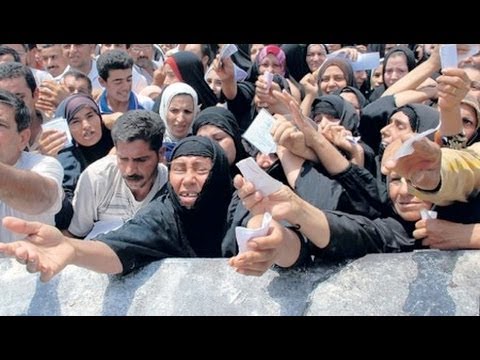 Nine years since the fall of Saddam Hussein, what are the conditions in Iraq? What is the level of violence? And what do the Iraqi people have to look forward to? Now joining us to talk about that situation is Sahar Issa. She’s with the McClatchy Baghdad bureau. In 2007 she was awarded a Woman of Courage in Journalism Award from the International Women’s Media Foundation. Thanks very much for joining us again, Sahar.

JAY: And once again I’ll just explain to people, we’re shooting Sahar in a way you can’t really recognize her, because it’s still not a very safe place to be a journalist, in Baghdad.

Sahar, so talk about nine years later what does Iraq look like.

ISSA: Nine years after the invasion, nine years, how many successive governments have come, have been elected, have been voted into control and into power, and the Iraqi people are still waiting for these governments to take into consideration that what the people want is to live a life that is normal, that is normalâ€”services within acceptable limits, electricity, clean drinking water, jobs. The aspirations of the Iraqi people are dwindling, their hopes of realizing their dreams through these successive governments. They are becoming a sarcastic people, and they are very skeptical about whether or not this generation will see any development in the country. It is not a good place to be at this time.

JAY: There was a very large demonstration in Basra todayâ€”supporters of Sadr. And apparently it’s partly because the Arab League meetings are coming at the end of the month. But the slogans, we’re told, were all about poverty and the dire economic situation facing Iraqis. What is that?

ISSA: I will [incompr.] something. Look at Basra. It happened in Basra. Basra may beâ€”as a province, may be one of the richest provinces, I don’t know, in the world. Its oil wealth is very, very much. And at the same time, these people are living in dire conditions. Jobs are a dream. There is no economy. There are no services. Nothing is moving forward.

Several times there were calls from Basrali politicians in order to create a province in Basraâ€”not a province, but a region, so that they would have more control over their fates, more control over how many schools they have, how many hospitals they have, how to bring about stability in economics, how to repair their streets, how to build homes and flats and apartments. But this call has unheeded, for the central government looks to keeping strong control over the provinces. It is not about to allow part of its power to go into the hands of the local government. This is basically what this is about. This is not only in Basra, of course, but especially in Basra, because Basra is so rich, the contrast is so great.

JAY: Now, oil contracts are being signed with foreign oil companies, both Chinese, American, and European. Oil is flowing. Money is coming in. Oil prices are very high. So where’s all the money?

However, because of the Arab summit, you see that the streets are being cleaned, flowers are being thrown, things like that. Superficial, superficial things are being made to beautify the cities, and millions and billions are going to this. And the really essential and important and fundamental things required in order to build lives of people, this is something that is being neglected. And the politician Haider Al-Abadi, who is an economist by professionâ€”and he is the head of the financial committee in the Parliamentâ€”once told us that if only the economy would be put to rights, a lot of even the political issues would dissolveâ€”people would be running after their livelihoods instead of running after problems. But, unfortunately, it is not a priority to the Iraqi government.

JAY: Now, the Maliki government, how legitimate is it considered by the Iraqi people? The elections have always been very controversial, and the whole process was the product of occupation. What is the sense of that?

ISSA: Let us put it simply. Those who profitâ€”or benefit, not profitâ€”those who benefit from this government consider it legitimate, and those who don’t want another one. This situation, of course, stems from the controversy that brought about these successive governments.

The other thing is there is a real feeling that the prime minister, Mr. Nouri al-Maliki, is consolidating power in his own hands. And some people are even wondering whether we will see more elections or not.

JAY: And what is the role now and the feelings of the Sunnis, who have felt, if I understand it correctly, very excluded from this whole process?

ISSA: It is not a matter of excluded. In the beginning they excluded themselves. It’s a matter of ethics. They thought that participating in a government that stems from occupation is not acceptable. But as a result of this ethic, they were excluded. And it was difficult for them when they came back in the next elections, because the other partners have already made deals, made friendships, put to strategies, and they are a latecomer. They tried very hard in order to become partners, but they still feel that they are not really partners, it is not a real partnership. It isâ€”how do you say?â€”they are together at the table, but the decision-making process is in the hands of the Shiite majority for sure.

JAY: And what is the level of violence now? Before the American troops left, there was dire warnings that massive civil war would break out again. What is the situation?

ISSA: The situation hereâ€”of course, violence has not stopped, but it has become a different kind of violence. Whereas formerly [incompr.] sectarian strife, it was more random, it was more random, it was faceless, it killed people on the streets for no reasonâ€”people went out and they didn’t return, they didn’t know that they were going to return it allâ€”now it’s a different kind of violence. It is a more political violence. Targets are carefully chosen. A lot of the Iraqi people believe that even the politicians themselvesâ€”those who are in the government, especiallyâ€”participate in this violence one way or the other. And as you see, we have an example that the prime minister for three years held a file on Tariq al-Hashemi that he only brought up now to use it politically. So it is not far-fetched that our politicians themselves are implicated in violence. It is political violence. It is less than it used to be.

JAY: And what is the ongoing role now of the United States in this massive embassy in Baghdad?

ISSA: It is advisory. But whether its advice is taken or not, this is a whole different thing. The numbers, of course, of the people present here are great. This is also something of controversy, because we hear that 16,000 people are inside the embassy. It is true that not all of them are State Department. Many of them areâ€”how do you say?â€”like, support, support things like security and service, etc., etc.

But their role seems to be diminishing. Is this good or bad? I don’t know if it is good or bad, because in some issues, to have the advice of the United States of America is to help politicians hold their horses. Our politicians are new to the game. Perhaps they don’t have the finesse, they don’t have the patience that is necessary for a political and diplomatic game. In this affair I believe that the Americans were very good in mediating between people, very good in bringing people together and rubbing out theâ€”what do you say?â€”rubbing out the harsh edges in meetings, and generally sort of becoming almost a glue keeping the partnership together.

Now that their presence is diminished and their influence and even their advice is diminished to a certain extent, we can see, because as soon as they left, the first thing that Mr. Nouri al-Maliki did, unfortunately, was to alienate the Sunni community by very strangely accusing the top politicians in this way. It could have been done in a better way, in a more political way, in a more diplomatic way. So was he doing this upon the advice of the Americans? Or was he opposing their advice? Or maybe he didn’t take their advice at all. But he is known to be a strong-headed man who has a will of his own, and he jumps into situations like this, regardless, sometimes, of the results.

JAY: And what’s happening amongst the people in terms of organizations that are emerging, trade unions, other ways that people are getting organized to fight for their own interests?

ISSA: To tell you the truth, it is very poor organization. There is a very low level of civil society. There is no progress in this matterâ€”I cannot say no progress. I will say, to be fair, there is little progress.

But to tell you the truth, building of establishments, as they would want to see in a country like Iraq at this time in history, we should have seen more accomplished. First it was because of the sectarian strife, and then it was because of something else, and then it wasâ€”there are so many excuses. And people are waiting, but they don’t know how long they have to wait and what it is they are going to get at the end of their very long wait.

JAY: Thank you very much for joining us.

ISSA: You are most welcome.

Sahar Issa is a McClatchy Baghdad Bureau Correspondent. She does the Round-up of Daily Violence in Iraq. In 2007, along with five other women from the McClatchy and Knight Ridder newspaper chain, she was honored with the Women of Courage in Journalism Award from the International Women’s Media Foundation.