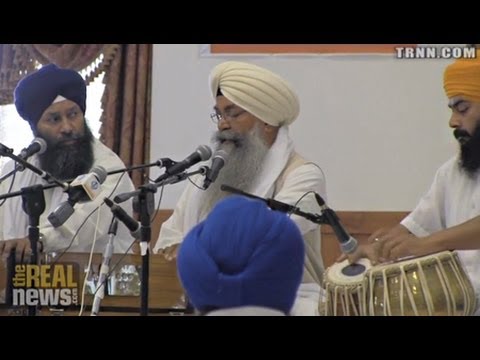 JAISAL NOOR, TRNN PRODUCER: Vigils are being held across the country today to mark the one-year anniversary of the attack on the Sikh Temple of Wisconsin that left six dead and five wounded. But advocates say much more work needs to be done to decrease the possibility of similar attacks happening in the future.

Originating in the Punjab region of what is now India and Pakistan, the Sikh religion is the fifth-largest in the world, and hundreds of thousands of worshippers live in the United States. Many Sikhs wear turbans and do not cut their hair as visible mark of their identity and an article of their faith. This has made them visible targets for discrimination and violence.

Among those remembering the victims of this, the deadliest shooting targeting against Sikhs in the United States, was Pardeep Kaleka, whose father was killed in the attack.

PARDEEP KALEKA, SON OF SHOOTING VICTIM: My father was a regular at the gurdwara. He was here three to four times a week. My dad served as the Sikh temple president for the last 15 years, moving from the south side of Milwaukee to other places where we rented, and finally financing and building this place over here in Oak Creek. So he was a regular. He was here early on Sundays anyways. My mom was here early on Sundays. She’s here usually as well. This is their home away from home. And it’s sort of fitting that he died in a place that he helped build.

NOOR: On the morning of Sunday, August 5, 2012, a heavily armed Wade Michael Page, a white supremicist, neo nazi linked extremist and a U.S. Army veteran walked into the Sikh place of worship, known as a gurdwara, in Oak Creek, Wisconsin, and opened fire.

If Page had attacked just a few hours later, the death toll could have been much larger, as hundreds more would have been at the temple.

KALEKA: I think the community’s response, you see it today. It’s overwhelmingly positive. I think most people are at peace today. I think we as a community felt like victims that day. And I think we as a community decided that that was going to be the last day that we were going to be victims. The difference between a victim and a survivor is a victim lets things happen to them, which we felt that day. We let something happen to us. But we made a conscious decision that we were going to be survivors, therefore not letting things happen to other people and never letting anything else happen to us again.

NOOR: Community members say prior to the attack, Sikhs who attended the temple mostly stayed to themselves. But over the past year, they have redoubled their efforts to educate their community about their faith.

GURPREET KAUR DULAI, RESIDENT, OAK CREEK, WISCONSIN: People come and go and constantly, you know, asking questions, wanting to know more. Curiosity for Sikhism is just unbelievable. The youth have really stepped up in that sense, where they’ve taken ownership of their religion. We’ve all gained a deeper understanding of our culture and our religion to be able to share that with others that are curious. And many of us have formed mentoring groups with the kids. And we go, and every Sunday we’ll mentor kids of different age ranges, different age groups.

NOOR: Even though Sikhism has been practiced in the United States for over a century, the media has failed to adequately represent it.

Jasjit Singh is with the Sikh American Legal Defense Fund, or SALDEF.

JASJIT SINGH, SIKH AMERICAN LEGAL DEFENSE AND EDUCATION FUND: You know, we’ve been in this country for over 100 years. We’ve faced a multitude of challenges. But we’ve also been great contributors to American society in various industries. But to a large extent, Sikhs have not been known. And, you know, the media is a strategic partner in that effort. You know, previous to Oak Creek, we weren’t really on the radar. After Oak Creek, there was just a blip on the radar, really, around this community and perhaps in the frame of the struggles that it’s facing. But beyond that, you know, in the last year we’ve gotten more exposure, but it really has dwarfed kind of the immense challenges and the needs that still exist. So it’s an ongoing relationship. We’re appreciative of, certainly, the efforts to cover this community. But more needs to be done from, really, both sides, from our standpoint and from the media side.

J. SINGH: In the year after Oak Creek we’ve made some progress with the government. And, you know, in one year, to get the FBI to agree to start tracking hate crimes against Sikhs, that’s progress in the context of one year later. You know. We know that the government has challenges in moving quickly, especially in this environment. But for them to recognize the need and move on it, that should be absolutely acknowledged, and we applaud that effort. At the same time, it’s not exactly a victory, in the sense that we’re simply requesting that we be recognized when we are facing these horrific challenges. And so it gives you a sense for how much work, really, there is to be done in a broader scale.

NOOR: Advocates have long called for the tracking of such statistics. After the terror attacks of September 11, 2001, Sikhs were targeted in the wave of anti-Arab and anti-Muslim hate crimes that swept the country.

Amardeep Singh of the Sikh advocacy group the Sikh Coalition says much more still needs to be done.

AMARDEEP SINGH, SIKH COALITION: So if somebody says, could another Oak Creek occur somewhere else in the country, the answer is a resounding yes. In the last year, in Daytona Beach, Florida, a Sikh man was shot at while he was driving in what police are calling a hate crime. In the last year, in Fresno, California, an 81-year-old Sikh man was beaten with a steel rod as he left the gurdwara, the Sikh house of worship there. In Seattle, Washington, a Sikh cab driver was mercilessly beaten with epithets being yelled by one of his passengers. And then this last year in Oak Creek. In all those three cases, if you can’t be safe while you leave your house of worship, while you’re literally just driving on the street or while you’re working as a cab driver, where else can you be safe? So the conditions that led to Oak Creek happening still exist today.

NOOR: Reporting for The Real News, this is Jaisal Noor in Oak Creek, Wisconsin.