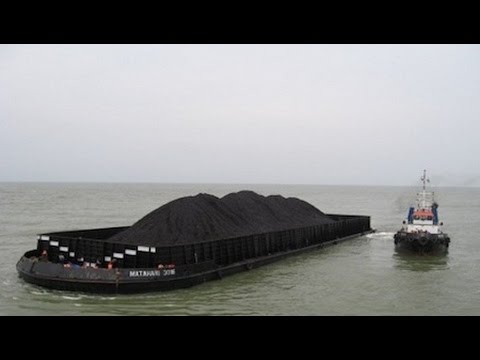 The Environmental Protection Agency is in its final phase of public hearings on their proposed clean power plan. This plan looks to cut carbon dioxide greenhouse gas emissions from American power plants by 30 percent by 2030. Republicans have called it a war on coal, while the Obama administration has said that it is a much needed step to help offset climate change.

But perhaps all is not as it seems for reducing coal power plant emissions. According to a new study by Greenpeace, American coal that is not being used at home is actually being sent overseas. So it begs the question: is the U.S. simply exporting climate change? That’s how some critics are seeing it.

Now joining us to help us clear up this issue are our two guests.

Steve Horn is a journalist and a research fellow at DeSmogBlog.

And also joining us is Joe Smith. He works on climate and energy issues with Greenpeace.

STEVE HORN, RESEARCH FELLOW, DESMOGBLOG: Good to be back. Thanks for having us.

DESVARIEUX: So, Joe, I’m going to start off with you. Can you just break down your study for us? What specific did you find? And how did you find it?

SMYTH: Sure. Well, as you mentioned, as we’re reducing the use of coal in the United States, much of this is just being shipped overseas. And, of course, with global warming, it doesn’t matter where the coal is burned; it still ends up affecting the atmosphere.

And so what we looked at is where is this coal coming from. And it turns out that about 40 percent of the coal that’s mined in the United States is actually owned by U.S. taxpayers, and it’s managed by the Bureau of Land Management, which is part of the Interior Department. And the study looked at how the program deals with coal, and how it deals with climate change issues surrounding it when it’s mined. And, unfortunately, the Interior Department really isn’t taking a hard look at how the coal will eventually be burned, either in the United States and abroad, and impact the overall greenhouse gas emissions that are damaging the atmosphere.

DESVARIEUX: Steve, as a journalist, you’ve been covering this issue extensively. Were you at all surprised by the findings? What would you say were some of the most significant elements that came out of it?

DESVARIEUX: Joe, I’m trying to understand this a little bit better. How many tons are we talking about? Where is the coal actually going? Can you give us some specifics here?

SMYTH: Yeah, absolutely. So our report looked at all the coal that’s been leased during the Obama administration, so beginning since January 2009 up until the last week. And the total amount of coal that’s been leased–again, this is taxpayer-owned coal–it’s $2.2 billion tons. Now, this is a huge amount of coal. And the emissions, the greenhouse gas emissions that will come from burning that coal, are almost 4 billion metric tons. Now, to try and put that in perspective, that’s equivalent–that’s actually slightly more than all the global warming pollution from the entire European Union in a year. And all of this is being unlocked by this federal coal leasing program without any consideration for the impacts to the global climate.

DESVARIEUX: Okay. And you mentioned the role of the U.S. Bureau of Land Management. Can you just speak specifically to that? What kind of role do they play in all of this?

SMYTH: Yeah. So the Bureau of Land Management is responsible for managing huge portions of land, mostly in the Western United States, and also many natural resources, like oil and gas and coal. In the Powder River Basin of Montana and Wyoming, this is where some of the largest reserves of coal that are managed by the Bureau of land management are placed. And, unfortunately, the agency hasn’t paid attention to the change in coal markets and new concerns about climate change.

And so what we’re calling for is a moratorium on this federal coal leasing and a comprehensive review to make sure that it’s doesn’t continue to undermine the efforts of the Environmental Protection Agency and other states to move away from coal and embrace cleaner forms of generating electricity.

DESVARIEUX: Steve, you mentioned earlier that this is part of a larger trend and you weren’t surprised by the study’s findings. Can you speak to other studies that have come up with similar conclusions?

HORN: Well, yeah. If you look at some of the stuff that the Chesapeake Climate Action Network is doing just on LNG exports, for example, and you look at the climate change impacts of both frack–the whole lifecycle, from fracking all the way to exporting the stuff to the global market, it actually has a bigger greenhouse gas footprint than coal, at least according to their studies. And so, today there is another LNG export terminal, the third one ever, permitted by the Federal Energy Regulatory Commission to export gas in Freeport, Texas. And so that one’s owned by ConocoPhillips and Dow Chemical and others. And so just looking at the comparisons between fracking and, you know, lifecycle and coal, and then you just multiply both by each other because they’re both happening and they’re both export commodities now, you’re looking at a huge greenhouse gas footprint, especially with what it takes to ship those by tankers across the globe. And then couple that just with the stuff that’s happening right now with oil in the United States, where there is talk about lifting the export ban of domestically produced oil, and the first batch of oil condensate was exported to the global market recently–we’re talking about the United States being a serious contributor to climate change, all under the name, kind of under the policy of “all of the above”. And that’s why I mentioned exporting “all of the above”, ’cause that’s what’s–we’re going in the direction of that in the United States.

DESVARIEUX: Joe, you mentioned sort of a way to solve this issue, and I want to get into this a little bit deeper. What other specific policies would you be advocating for in terms of ways to stop this, quote-unquote, exporting of climate change?

SMYTH: That’s a great question. And, again, I think the first step is to put a stop to the leases that are happening right now. They leased 8 million tons of coal just yesterday, again not paying any attention to the fact that the company very likely plans to export it, and paying no attention to the concerns around climate change of unlocking all this coal. So the first step, I think, is to stop and pursue a comprehensive reform of what this program should look like in the future. And I think a part of that reform should include incorporating some of the damages to society from greenhouse gas emissions when we’re establishing how much this coal or oil or gas should be sold for.

So right now the administration’s not looking at that at all, right? They kind of just don’t pay attention to the fossil fuels that they are allowing mining companies and oil companies to develop, and just trying to solve the problem by reducing power plant emissions. Now, that’s a worthwhile step, but if the coal and oil and gas is being leased and then just shipped overseas, then those emissions aren’t taken account of. And that’s a real serious failure in federal policy if the Obama administration wants to seriously address climate change.

HORN: Well, it’s–I noticed a little bit of a Freudian slip. And, actually, some of the stuff is very bipartisan in that both parties are pushing for “all of the above”. The 2012, unfortunately, election was between two presidents who were running on an “all of the above” energy platform.

And so, there are definitely politicians, more climate-friendly politicians on the Democratic side of the aisle who are calling some of this stuff into question. In particular Senator Markey is calling the stuff with the oil exports into question, as well as some of the stuff with the LNG or liquefied natural gas exports. And so it’s going to take a lot more than just a couple of politicians writing letters about it. We need–I guess people needed to be pressuring their politicians and talking to politicians about the problematic nature of what’s going on here. But, I mean, at the end of the day it’s going to take a grassroots movement to kind of move the barometer in a different direction, ’cause right now the direction it’s going in is essentially moving us and chasing us off the climate cliff, and that’s nothing that we should accept.

DESVARIEUX: Alright. Steve Horn as well as Joe Smith, thank you both for joining us.

Joe Smyth has worked on climate and energy issues with Greenpeace since 2007, and is based in Washington DC. He writes often about the coal industry and its impact on communities and the environment.