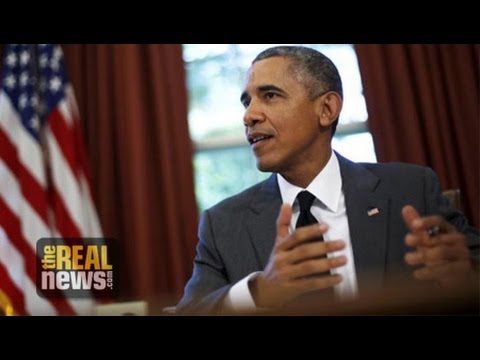 Turning once again to the environment in U.S.-related policy, we want to take a moment to look at what critics have labeled as President Obama’s schizophrenic policy on climate change. On one hand, Obama pushes green energy, while simultaneously pushing pro-fossil fuel interests. For instance, his Clean Power Plan which includes support of natural gas, or his announcement of an Arctic marine reserve while greenlighting Arctic oil drilling. Apparently added to this list is the Obama plan signed during the COP21 United Nations summit in Paris last month that is backed by the likes of Exxon and the Koch brothers, and which expedites oil and gas pipeline permits in the United States.

With us to discuss his recent expose for DeSmog Blog, titled During Paris Climate Summit Obama Signed Exxon-Koch-Backed Bill Expediting Pipeline Permits is investigative journalist Steve Horn who is joining us from Indianapolis, Indiana, where he is also a research fellow at DeSmog Blog. Welcome back to the Real News, Steve.

STEVE HORN: Good to be back. Thanks for having me.

BALL: So the first question I have is that, you know, for some of us, the laypeople out here, certainly, we assumed, or had heard and saw people claiming a victory, around what was Obama’s veto of the Keystone pipeline back in November. How does this most recent bill challenge what was an apparent victory, again, seen a few months ago?

HORN: So this bill, which is part of the highway bill, the FAST Act, a provision within it on page–close to the end of it. It’s a 1,300-page bill. It’s actually a continuation of the same exact policy that the Obama administration has been pushing since the Keystone XL debate, and activism and everything surrounding it began in 2011. And that is it’s an executive order, Executive Order 13604, which went ahead and expedited the building of a southern leg of Keystone XL.

And that extends the executive order signed in March 2012, was pushed forward on the same day as another executive order, that is the 13604, accompanying that southern leg of the pipeline executive order. That one expedites the building of all pipelines and other infrastructure related to oil and gas, [and even] renewable energy, which is why a lot of, some people are a little bit upset about this article. They got what they wanted, too, which is expedited [permitting] for renewable energy. But of course oil and gas industry and the coal industry was behind this.

So this has been in place since 2012, really. And it’s a [inaud.] expedited building of the southern leg and other pipelines. Activists have been more–unfortunately too much focused only on what ended up being the northern leg of Keystone XL. That is what Obama ended up nixing. But what this bill does is instead of it being an executive order, now it is codified by law, Congressional public law. And so it adds all kinds of things that make it much more potent than if it were just an executive order. So it’s a more or less continuation of the real policy. I’d say it’s rather a [inaud.] reality in terms of what the Obama administration has been doing about Keystone XL and other oil and gas-related infrastructure in the United States.

BALL: So just to clarify, make sure I heard you correctly. What was the apparent victory in November was the veto of a certain part of the pipeline that extended into, the southern part of it into the United States. But at the same time was allowing for those same fossil fuel interests to get pretty much what they wanted in Canada and elsewhere. Is that what I’m hearing you say?

HORN: Yeah. And I would say that this executive order which does two things, there’s two separate things. There’s the executive order for the southern line that goes from Cushing, Oklahoma down into the Gulf coast. And there was an executive order that expedites permitting for all oil and gas-related infrastructure. I think they’re related not only in that they were signed on the same day by Obama back in March 2012, after a visit that he made to Cushing, Oklahoma where he made a speech in front of pipes that would become the pipes of that southern leg of the Keystone XL.

But it’s important in that I think this was a backlash against the activism that held up the northern leg of the pipeline across the U.S. and Canada border. And that is, from here on and forward I think the industry is really trying to say we don’t, you know, they even called, the concepts were called Keystoneization, which was the term coined by the head of the American National Gas Alliance, Marty Durbin, the nephew of U.S. Senator Dick Durbin in Illinois. And basically the industry at large saw what happened and definitely wanted to avoid anything like that happening again, and so that’s what they, that is really what they got from the Obama administration. I think that at the end of the day it was a tradeoff. The Obama administration said we will not approve of the northern leg, and we will expedite the building of everything else.

And unfortunately this is not a frame through which most environmentalists see what happened in this fight, and I think this is the actual policy reality of what now exists in the United States of America.

BALL: So how does this bill, or this plan and this fast track process circumvent the important National Environmental Policy Act, which you and the Journal of Law and Policy write is referred to as the Magna Carta of environmental law, requiring all federal agencies to evaluate the environmental impact of their actions? How does this impact that act?

HORN: Yes. NEPA is, if we’re talking about the First Amendment for free speech, NEPA is sort of a candidate for environmental reviews and big projects, pipelines, and [inaud.] construction in the United States. And basically what we’ve seen since this Keystone XL debate, it’s been an acceleration of basically big pipeline projects not going through conventional NEPA reviews, especially ones that carry tar sands in the United States, tar sands that are mined up in Alberta.

So we’ve seen, and this all falls under that same exact executive order. We’ve seen several pipelines, especially ones owned by Enbridge, have been approved with no NEPA reviews at all. There’s been several federal court cases, all of which environmental groups brought, but none that they win. And it’s interesting because it goes right into the, the meat and potatoes of the bill, and the bill that passed, the highway bill and the provision within it. Basically that bill narrows the number of years the statue of limitations in which plaintiffs can bring a NEPA lawsuit. It was six years, now it’s two. And so it’s just a further chipping away of NEPA, which we’ve seen that the Obama administration already enforce, as I mentioned. But this bill, again, this codifies it, makes it even harder to bring a NEPA suit.

And NEPA of course, is not–what it does is it allows for public hearings, [inaud.] public commenting periods. It’s basically just democracy. So what this really is is the [curtailing] of democracy as it relates to people being involved in decision making around pipelines and other critical infrastructure in the United States that carries fossil fuels. Or even renewable energy, wind. Say there’s a windmill in someone’s community and it’s making a lot of noise and they’re not liking that. Well, this really cuts away at the chance to comment on and be involved in the decision making process.

HORN: Thanks for having me.

BALL: And thank you all for joining us here at the Real News. Again, for all involved, I’m Jared Ball here in Baltimore, saying as Fred Hampton used to say, to you we say peace if you’re willing to fight for it. So peace everybody, and we’ll catch you in the whirlwind.

It Could Take 2,800 Years to Clean Alberta’s Old Oil and Gas Wells